When I was looking for a ramen cookbook, I flipped through several of them before purchasing this one - Ramen: Japanese Noodles and Small Dishes by Tove Nilsson.* I will say that cookbook appeal is very personal. Some readers might prefer beautiful photos where others desire a well-told story. I tend to like a mix of those. But what drew me to this book is that everything needed for a bowl of homemade ramen was included - from the broth to the toppings and even the noodles. 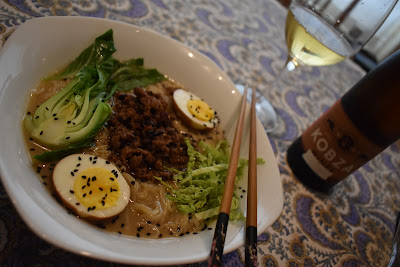 Okay, so I didn't end up making my own ramen noodles. However, trust me, I have that on my to-do list now! But, with Nilsson's book as inspiration, I made a Homemade Ramen Broth with pig trotters and chicken paws; I pickled eggs in soy sauce; and I ended up with a delicious version of Nilsson's Tantanmen Ramen.

For this culinary creation I needed pig trotters, pork bones, and ground pork. Thankfully, I know a pig farmer; he and his Bacon Bus come to town once a month. You can read about Jack Kimmich and his California Kurobuta in my post: California Kurobuta Burgers.

Before I get to my recipe, I wanted to say a few things about this book. I said it inspired me into the kitchen. That's already a winner in my mind!

She offers a variety of broths from pork and chicken broth to mushroom broth. I mentioned the noodle recipes. Then she details a dizzying number of ramen variations from Shoyu Ramen to Chicken Katsu Ramen and Lemon Clam Ramen. All of them had me wanting to stick some chopsticks into the book! Though we have made meals out of ramen, it's her chapter on small plates that will have me coming back to this book. I love the tasty sidedishes she offers: sweetcorn with ponzu, sesame-fried spinach, crispy prawn daikon, and pumpkn cooked in dashi. Yes, please!! I will try them all. 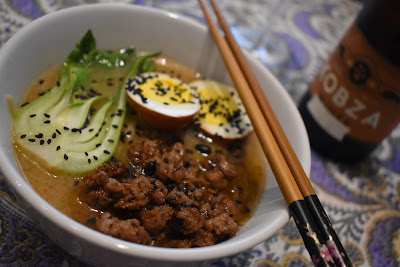 I had a tough time deciding on which ramen to make. I knew I wanted to make a new-to-us ramen and I wanted to use some of the fresh veggies I had on-hand; and I had some bok choy that needed to be used. So the Tantanmen Ramen called my name.

Procedure
Bring the broth to a boil in a large pot, then reduce to a simmer and keep warm.

Bring a large pot of water to a boil, preferably one with a strainer basket so cook the bok choy and noodles in the same water without having to re-boil. Blanch the bok choy. Remove it from the pan and rinse it with cold water. Keep the water at a simmer for the noodles.

Pork
Heat oil in a large skillet. Add in the ground pork, green onions, ginger, and garlic. Cook until the pork is mostly browned. Stir in the beans, sesame oil, hot sauce, and soy sauce. Continue cooking until  the meat is a dark brown and some bits crispy.

Cook your noodles according to package directions, if you're using packaged ones! While your noodles cook, gently ladle 1-1/2 C broth into each bowl and whisk to incorporate the tahini, oil, and sauce into the broth.

Divide the noodles into the serving bowls and ladle in another 1/2 C on top of the noodles. Top with the ground pork, soy sauce pickled eggs, boy choy, and shredded cabbage. Sprinkle with sesame seeds. Serve hot.