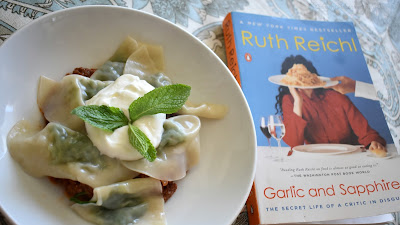 Claudia from Honey from Rock is our Cook the Books hostess for this round (June-July 201); she chose Garlic and Sapphires: The Secret Life of a Critic in Disguise by Ruth Reichl.* If you want to join us, posts aren't due till the end of July. You have plenty of time.

On the Page
This memoir details her exploits during the first few years of her tenure as a restaurant critic for the New York Times. And when I write 'exploits' I mean fully costumed escapades in which Reichl adopted different personae in order to get an unbiased take on a restaurant. I mean, I have certainly received perks and bonuses at places when folks recognize me as a writer for a local food magazine. I can only imagine what sorts of benefits Reichl would get. Actually, I don't have to imagine; she describes it to us.

So, she would go in disguise; she became her mother. "And then it hit me: I was going to dress up like my mother. The notion pleased me just a little too much, and I realized that sometime in the near future I was going to have to think about why this disguise was so much fun. But first I had to practice putting on Mom's makeup. I didn't want Nicky to wake up and discover that his mother had been replaced by a stranger - it would probably terrify him" (pg. 89).

She transformed into Chloe: "I liked the black satin suit the minute I saw it.... The jacket was simple, tight, cut low, with a little flare at the bottom. The skirt was short, with three tiers. It fit me perfectly - more than perfectly. It made me look elegant, think, put together. Glancing in the mirror, I caught a flash of leg. Then my eyes moved upward and I witnessed and instant metamorphosis" (pg. 125).

Becoming Brenda gave her an opportunity to don a wig. "'Too big,' said Carol when I put on the first on, a flaming frizz that turned me into Bozo the Clown. 'Too small,' she said when I slipped on tight little curls. Glancing into the mirror, I saw that I had the forlorn look of a hennaed poodle. 'Wrong, wrong,' she cried when the next one went on. Fat, strawberry-red curls hung by my cheeks, making me ludicrous, like an aging Ann-Margret. The short straight curls made my head look too small for my body. The preppy copper pageboy was cute and perky and plain wrong for my face" (pp. 158-9).

The memoir also included what I am guessing are her actual reviews. About Tavern on the Green, she wrote, "Every restaurant has its off nights, but in my experience they are standard at Tavern on the Green. One recent night we waited 40 minutes after placing our order before any food arrived. The captain acted as if he were bestowing a favor each time he honored us with his presence, and the waiters hardly deigned to glance our way" (pg. 221).

Giving The Box Tree a 'poor' rating, she detailed, "Soups are a problem. The lobster bisque is dreadful. The bisque of morels is even worse; once you get past the taste of sherry, it is absolutely impossible to tell what you are eating. ...Avoid, at all costs, anything made with lobster. ...If the shell decorating the dish was related to the lobster that once inhabited it, it was no two-pounder. And that 'beurre blanc' was gritty with uncooked starch and seasoned primarily with dill. Lobster Mornay at dinner was tough" (pg. 305).

Being a left coaster, I am completely unfamiliar with many of these New York restaurants she reviews, but the descriptions in her three-star Union Pacific review had my mouth watering. "Chicken is transformed in Mr. DiSpirito's hands. His slowly poached bird arrives in tender strips atop a summer truffle puree. Halibut, that normally boring fish, is animated by its preparation, too: Mr. DiSpirito gently poaches it in goose fat and tops it with cracklings made of shallots. ...All of this is a hard act to follow, but the desserts are as interesting as the main courses. The strawberry charlotte with pistachio ice cream is deeply flavored. Raspberries are set onto a tart with lavender and the crème brûlée is laced with passion fruit essence, topped with pineapple sorbet and served with a twist of sugar candy threaded with black sesame seeds" (pg. 314).

Needless to say, I thoroughly enjoyed this book. Reichl is not only a culinary powerhouse, but she has an appealing prose that makes her vibrant personality shine.

On the Plate
When I first read another of her memoirs Comfort Me with Apples, I made some Butternut Squash Soup a la Bonneville. Her Cochinita Pibil with Homemade Tortillas hit my table after I saw her present at the Foodie Edition in Carmel last year. 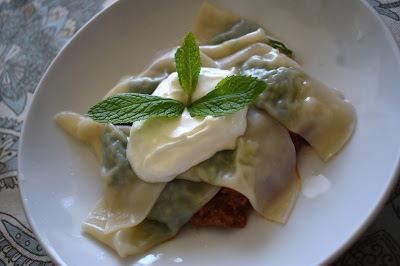 And while she includes several recipes in this memoir, the one that struck me was one with which I was completely unfamiliar: aushak. She shares, "An Afghan exchange student had given it to me when I was an undergraduate with a reputation as a cook. At the time these scallion dumplings seemed too strange, too exotic, too time-comsuming, and I had never attempted them. Now, studying the ingredients, I was curious" (pg.270).

I was curious, too. So, one afternoon while the boys worked on school projects, I adapted her recipe for lunch. 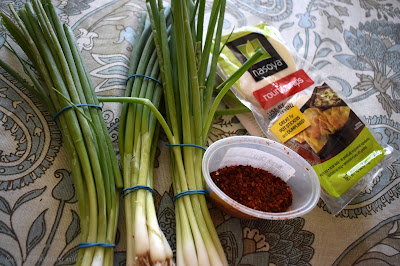 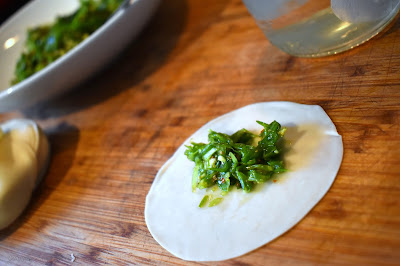 Meat Sauce
Heat oil in a skillet. Stir in the onions and cook until softened and translucent, approximately 5 minutes. Add the beef, garlic, coriander, and ginger. Cook until the meat is thoroughly cooked and browned. Pour in the water and simmer until it's reduced by half. Fold in the tomato paste and season to taste with salt and pepper.

Yogurt Sauce
Whisk all the ingredients together. Refrigerate until read to use. 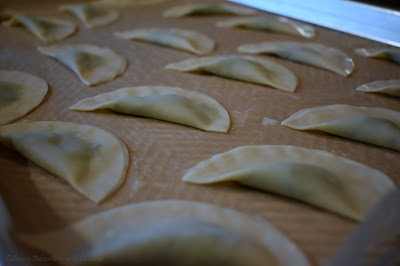 Place a wonton wrapper on a flat surface and moisten the edges with water. Spoon 1 t of the green onion mixture into the center and fold the wrapper in half to make a moon shape. Press the edges together. Repeat until you have used all of your filling. 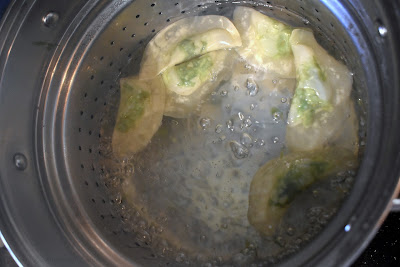 To cook, bring water to a boil. Gently drop the dumplings into the pot and cook for 5 minutes. Drain. 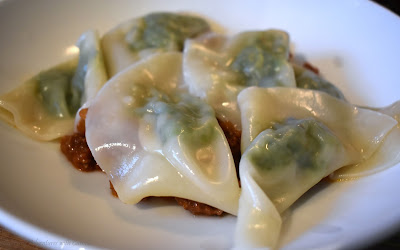 To serve, spoon meat sauce onto a individual serving plate or bowl. Top with dumplings. Add a dollop of yogurt sauce and garnish with fresh herbs. I used mint. 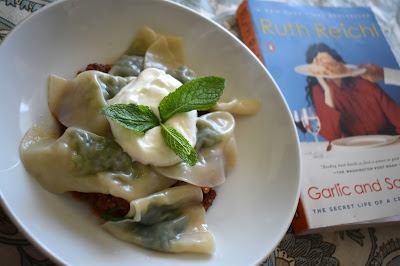 I loved the different flavors and textures of this dish! The kids found the green onion filling a little too strong for their tastes, but they ate it anyway.

I am also linking this up to Foodie Reads.
Here's what everyone else read in June 2018: here.