By Camilla M. Mann June 15, 2018
This is a sponsored post written by me in conjunction with the June #Winophiles event.
Wine samples were provided for this post and this page may contain affiliate links. 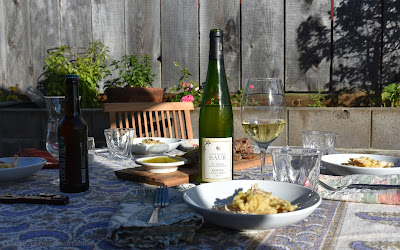 Jeff of FoodWineClick! is hosting the French Winophiles as we explore the Alsace region for June's event. You can read his invitation: here. And many thanks to Michelle of Rockin Red Blog for arranging samples through Teuwen Communications for the party as they represent Wines of Alsace and spearhead the month-long Alsace Rocks. Cheers!

Alsace, due to its location on the border of Germany and France, has been subject to a series of political tug-of-wars for years and years. Here's what I mean: at the end of the Thirty Years' War, in the mid-17th century, Alsace was given to France. Nearly 250 years later, at the end of the Franco-Prussian War, Alsace was seized by Germany. Post-WWI, it was once again part of France...until 1940 when Germany reclaimed it. And, finally, with the end of WWII, Alsace became French again and has stayed so ever since. You can see the effects of this on-going conflict in the languages spoken, the architecture, the cuisine, and the wine.


If you are seeing this early enough, please join our Twitter chat.  We love visitors and happily chat and answer questions. Simply tune in to the #winophiles hashtag this Saturday, June 16 at 10am CDT. You can also check out the #AlsaceRocks hashtag for more Alsace fun during and after the chat.

Alsace Pairing Challenge? Accepted!
Wine production in Alsace can be traced back to the Roman Empire. And nearly 90% of all Alsatian wine is white with the principal grapes being Riesling, Pinot Gris, Muscat and Gewurztraminer or Gewürztraminer; Alsatians prefer it without the umlaut, Germans use the umlaut. Of the three curated shipments sent to the bloggers, I received the Food Pairing Challenge package. Perfect! I'm always up for a challenge. 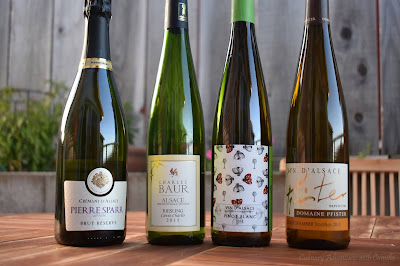 I'm including my tasting notes in this post with a link to the recipes. Just click on the recipe title (in bold) to go to that post. Enjoy! If the links aren't live yet, please be patient. I waited until the very last minute to schedule this wine pairing dinner party. So, the recipes might be "in progress." Check back. 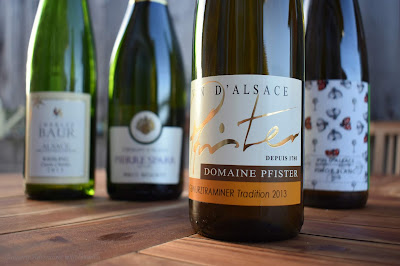 The signature on the Pfister label is that of Mélanie Pfister’s great-grandfather. She is the eighth generation of winemaker in the family and still works alongside her father. Before she took the helm with the 2006 vintage, she completed internships all over the globe in the wine world - from New Zealand to Burgundy and back to Alsace. 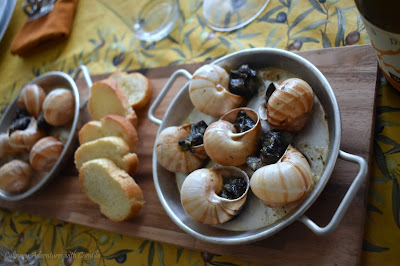 Aged long on the lees, this Gewurztraminer is big on richness and aroma and light on tannins. It's weight makes it as satisfying as many red wines when it comes to pairing with meat. 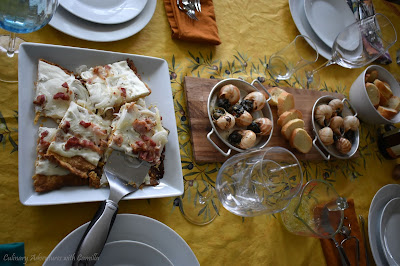 It was a little bit sweet for my tastes, but, in this case, I decided to match it with buttery, garlicky escargot and cheesy, salty Tarte Flambée to kick off the dinner party. 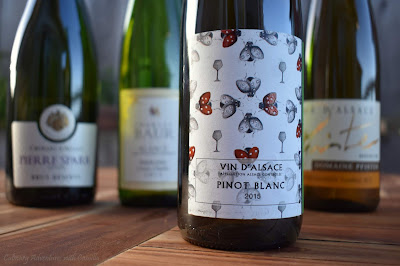 La Cave de Ribeauvillé is the oldest wine co-op in France and is comprised of over 650 acres with a variety of soil types. The cooperative makes all seven of the classic Alsace varieties operates under a unique quality charter that requires 100% parcel traceability, strict yield control, and total organic or sustainable farming. Evelyne Bleger-Dondelinger is currently the head winemaker of Cave de Ribeauvillé. 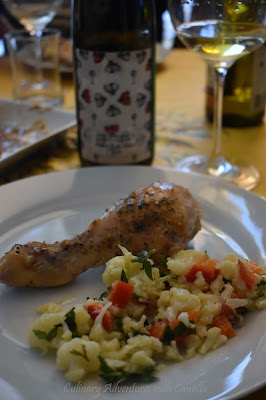 Made from hand-harvested grapes, this wine has good structure. With an intense nose, I thought it would make a nice pairing for our main course when I served Farmhouse Chicken in Vinegar Sauce with Alsatian Salad. It did. 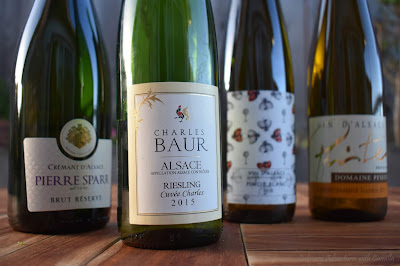 Located in Eguisheim, in the heart of Alsace, the Charles Baur estate has been in the family since the early 1700s and is currently being managed by Arnaud Baur who joined the family business in 2009 after earning his degree in agricultural engineering with a specialization in oenology.

This wine, a 100% Riesling, is made from 25 -year -old vines grown in sandy soil. After being hand-harvested and hand-sorted, the grapes are pneumatically pressed and fermented slowly with indigenous yeasts. After fermentation, the wine matures on its lees for several months before being bottled in August. Named for the founder, Charles Baur, the 'Cuvée Charles' strives to be the most representative Riesling of the vintage. 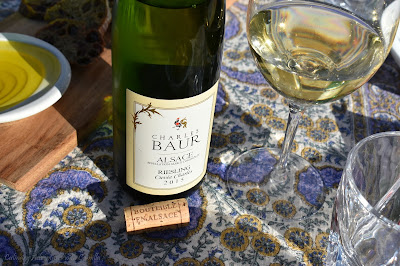 On the nose, there's a playful mingling of flowers and citrus. On the tongue it's fresh, crisp, and dry  with a balanced finish. It paired nicely with the rabbit and dumplings. 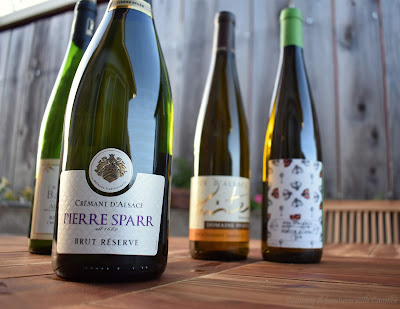 Alsace has been renowned for its dry white wines. And, in the heart of Alsace’s Haut-Rhin, Maison Pierre Sparr follows a 300-year-old tradition of winemaking that began during the reign of King Louis XIV. Since late 17th century, the Sparr family has passed its passion for viticulture and winemaking down through the generations.

Made with whole-cluster pressing, the first fermentation transforms the must into still wine. Six months later, the two different grape varieties are blended to achieve the distinct flavor profile of brut réserve. Then the blended wine is bottled with yeast to launch the second fermentation in the bottle. 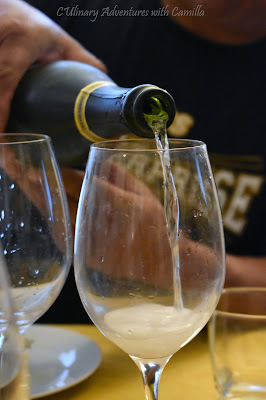 To the eye this wine is pale yellow with green lights. To the nose, the wine offers aromas of summer melon with hints of nuts. On the palate, it's racy, crisp, and lemony. 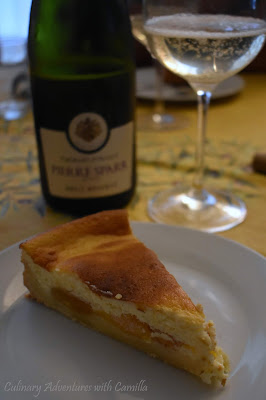 I had thought to open up the evening with this and a cheese platter. But I decided to end with bubbles and serve this with slices of Käsküeche (Alsatian Cheesecake with Boozy Fruits). The limoncello-soaked apricots matched the bubbles perfectly! 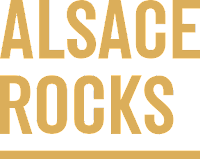 Alsace Rocks on the web