The Foodie Edition with Nancy, Ruth, and Evan

By Camilla M. Mann May 26, 2017
Last week I had the chance to attend "The Foodie Edition", a benefit for the Carmel Public Library Foundation. Through work, but not for work, it was nice to be there just for fun. Though, truth be told, I did whip out a notepad and pen because these gals were such a riot and I wanted to be sure to remember some of their comments. The speakers were Nancy, Ruth, and Evan.

That's Nancy Silverton, Ruth Reichl, and Evan Kleiman. I jokingly only wrote their first names in the title of the post because there was a point when they joked about some chefs needing only a first name: Alice (Waters) and Wolfgang (Puck), for instance.

The format of the event included an hour of wine and mingling, a cooking demonstration, and a panel discussion. I didn't take any photos because (1) I wasn't working and (2) didn't have a press pass or explicit permission to photograph in the venue. That didn't stop many people in the audience from snapping away on their phones, but I always feel odd about pulling out a big Nikon for a point-and-shoot moment, especially when trying to capture a moment surreptitiously. 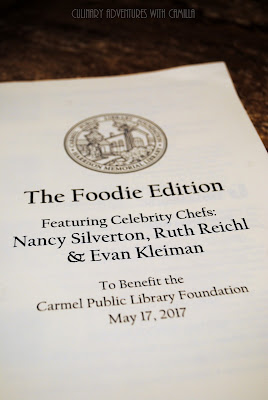 Just thought I'd post some of the gems they shared. While I didn't find their recipes or sentiments earth-shattering, it was an entertaining evening. It was like peeking into one of their dining rooms for a private party as they have been friends for four decades. There was a familiarity there that made for a casual - almost silly - atmosphere. While they each created their own dishes, the phrase "too many cooks in the kitchen" did pop into my head a couple of times.

Evan made a ricotta gnocchi colored with beets. That's one of D's favorite recipes already; check out his Roasted Beet Gnocchi with Wilted Beet Greens that he made for Valentines' Day. Instead of rolling the dough into ropes and cutting them, Evan simply dropped spoonfuls onto a floured tray and rolled each gnocchi by hand. We might try that next time. 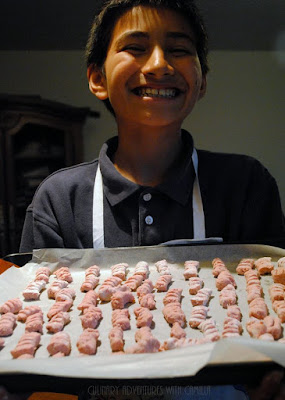 I do plan to try the recipe Nancy demonstrated, Egg Salad with Anchovy Toasts. Soon!

And Ruth shared her Cochinita Pibil. That is another recipe I'll have to try because, I agree, anything roasted in banana leaves is magical. I did learn that I should toast the leaves. Even from the audience, you could watch the leaves change color as she toasted them. I bet that would enhance the flavor even more.

Okay, just a few soundbites from the evening...

Evan: "Food is not just about the taste. It's about the sound."

Ruth: "I like tasting menus. I think they show me the chef's vision. It's their personality on a plate."

But the single thing that stood out for me was the discussion of the "new" foodies. I am not sure if they were talking about GenY, Millennials (Wait! Are those the same thing?), or whatever they are calling my kids' generation. GenZ?? But they were hopeful. They commented on how this new generation is one of the most informed about sustainability and conscious eating.

Where my generation, GenX, was all about fast food and convenience, my kids are well-entrenched in the slow food movement. My kids read labels. They ask questions about our food sources. They cook. They give me hope. Obviously they give others hope, too.