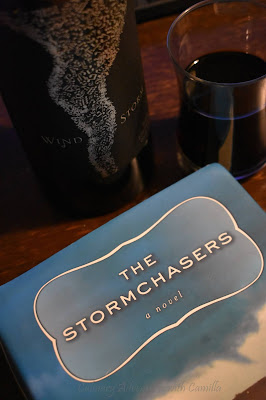 Last month I took part in a virtual dinner party and read The Lost Family by Jenna Blum. And, as always, when I really enjoy an author's work, I jump in grab as many of their books as I can. In this case, I picked up the two that I could find and dug into The Stormchasers* immediately. 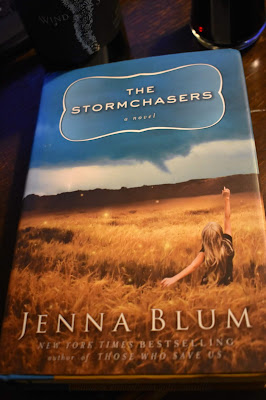 On the Page
The Stormchasers was a very quick read; I think I read it in just two sittings. The story centers on fraternal twins Karena and Charles who haven't seen each other in twenty years when a tragedy drives a wedge between them just after their eighteenth birthday. Fast forward two decades and Karena receives a phone call from a hospital that her brother is there. Charles is a storm chaser (think Twister!) who follows tornadoes and relates them to the storms in his head; he has bipolar disorder. So, she drops everything and rushes to the hospital, not knowing what she'll find. By the time she arrives, he has checked himself out.

So, Karena, a seasoned reporter, joins a storm chasing group - under the auspices of doing a piece about them - and heads into the storms herself. I'm not going to spoil the book for you. Let me just say that Jenna Blum has a gift for revealing a character the way that you peel away the leaves of an artichoke. As you delve deeper into her stories and her characters, they get softer until she has revealed their heart. She's a masterful storyteller who draws you in to whatever world she's created.

In this case, I was transported to the world of the storm chasers.

True story: I lived in Oklahoma for thirteen months. One day, I was finally getting used to living in the Midwest. We had spent the day at a great natural history museum with the boys and I remember speaking these aloud words to my husband: "It's not so bad. I think I can live here."

That very same afternoon, a tornado struck and touched down less than a quarter of a mile from our house. I was in the innermost room of the house with a baby strapped to my chest and a toddler at my hip. All of us were wearing bike helmets listening a tiny, handheld radio. Meanwhile my curious husband was out on the porch taking photos. Needless to say, I was stressed. And though the storm passed without incident to our property, I decided I was not cut out to live in tornado country. We moved back to California a month later. 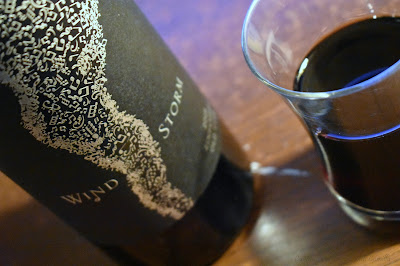 In the Glass
There wasn't much in the way of food inspiration in the novel. I mean they mention food...

"Karena makes herself a rootbeer float, Charles's favorite drink, and carries it outside to where Fern and Alicia and Marla, and Scout are sitting on the wall of ice-melt bags piled against the convenience store. The women fan themselves and eat candy Marla passes out, Mallo Cups and Nut Goodies and Cherry Mash" (pg. 125).

"She opens the refrigerator to buy time. Besides, she's thirsty. The cigarettes and beer have dried her mouth out. But Siri has drunk all Karena's Diet Pepsi. There's only one half-open can left, and it will be flat. Otherwise the fridge is lettered with mystery dishes, Bakelite bowls containing two carrots, a handful of canned string beans, Jell-O. A moldy stack of olive loaf. Karena slams the door" (pg 175).

But nothing was really compelling me into the kitchen. Then, when I was at a small local deli, I noticed a bottle of wine that I had never seen before - Windstorm Vineyards' Old Vine Zinfandel. I decided to share tasting notes on that instead of making a storm chaser-inspired dish.


Located in Lodi, Windstorm sources Zinfandel from both Lodi and Madera. This wine has a deep garnet hue with big jammy aromas of red berries and licorice. With soft tannins and oak notes, this was a great match for a grilled steak!

Here's what everyone else read in June 2018: here.