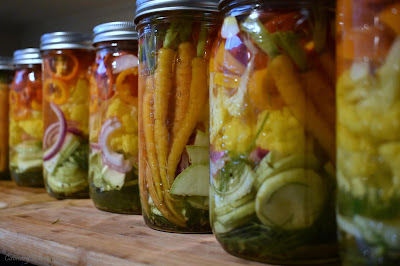 For R's fundraising dinner, I wanted to kick off the evening with plates of marinated olives and homemade giardiniera. As I was cooking and plating like a madwoman, I relied on the boys to serve and, when they felt like it, take photos. I'm not sure which on of them took this shot [below], but I like it! These need to marinate for at least three days. So, we headed to the farmers' market on Tuesday, jarred them, and they were perfect for our Sunday dinner! 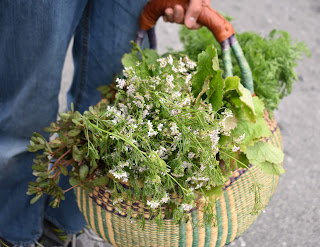 I had the boys pick vegetables based on color. I wanted to make a rainbow! We ended up with red onions, red and orange peppers, baby carrots, yellow cauliflower, and green summer squash. Then I added in fresh fennel, fresh dill, and some spices. Easy peasy. 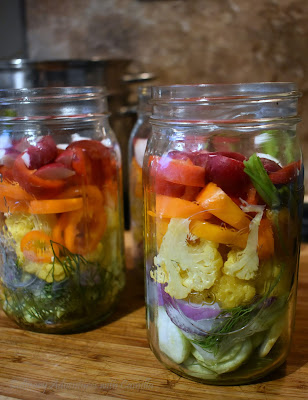 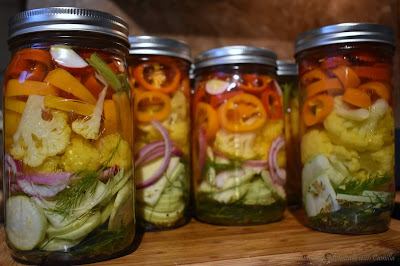 Quickly blanch the harder vegetables. I blanched the carrots and cauliflower; I used the rest raw. And when they're cool enough to handle, pack the veggies into the jars as tightly as you can. I layered in approximately 1/2 C of each kind of veggie, pressed down as tightly as I could.

In a large pot, stir together the vinegar, water, salt and sugar. Bring to a boil. Ladle the boiling bring over the veggies. Pour a glug of olive oil over the top, then cap the jars with lids and rims and tighten to finger-tight. Invert jars on a towel-lined surface to move the spices throughout the jars.

Place in a hot water bath. Simmer for 10 minutes to process. Remove to a towel-lined counter and let cool for 12 to 24 hours. Test jars for a good seal. Refrigerate any jars that do not seal properly. Let pickles ferment for at least 3 to 4 days before eating. 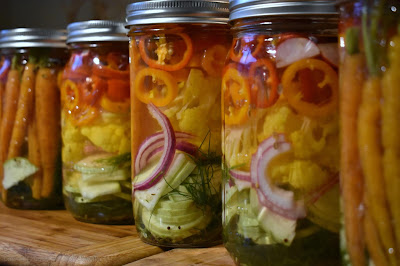 Funny story: I had prizes for the fundraising dinner and my mom opted to run it with some Italian trivia. I had some of my favorite Italian cookbooks ready to give away. And there were no takers. We picked three winners and they all declined the books. But when I offered leftover jars of the giardiniera, they wanted to play again!