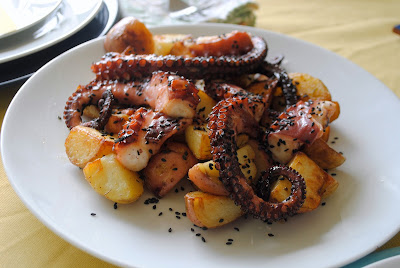 This was a dish that my son picked for his fifteenth birthday celebration (menu). While the kids drank sparkling water and homemade soda, my husband and I opened up a bottle of Donkey & Goat's Pet Nat. What a lovely, summery pairing! 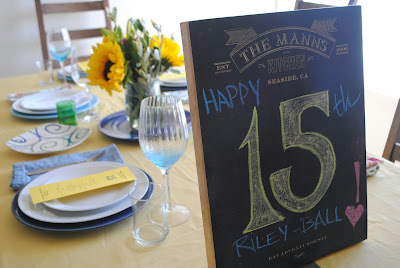 Since I invited the #WinePW crew to pair grilled foods with wine, I decided to share my octopus dish. You can read my invitation here. And if you're reading this early enough, we'll be chatting live on Twitter, Saturday the 10th, at 8am Pacific time. Follow the hashtag #WinePW.

We have some fun summer pairings and topics planned, so stay tuned. The #WinePW crew will be talking "Summer Suppers and Wine" with Nancy from Pull That Cork in July; August has us pouring Rosés with Lori of Dracaena Wines; and we'll be headed to the Iberian Peninsula to explore Spanish wines with Gwendolyn of Wine Predator in September. What a fun line-up!

Here's what the #WinePW bloggers grilled and poured...
In My Glass... 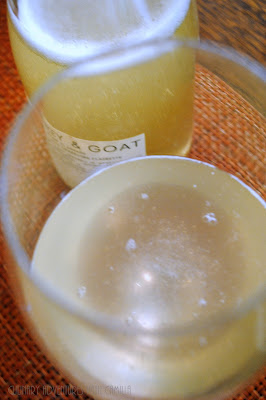 Actually I have to admit that before we finally made it to Donkey & Goat's tasting room in April, I had never heard of a Pet Nat. 'Pet Nat' is short for pétillant naturel and can be made from any grape variety and is an ancient way to make sparkling wine. For the 2016 Donkey & Goat used Chardonnay grapes for their exotic, explosive wine; the 2015 Pet Nat was made with Clairette grapes. 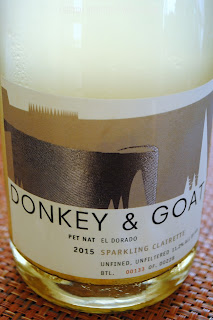 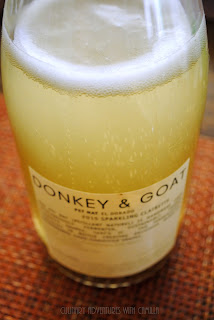 This was a wonderfully aromatic wine whose floral notes immediately tell you it's not for the faint of palate. Think heady honeysuckle and jazzy jasmine. As it gets more air, more brightness and melon and pear notes reveal themselves. And while the bubbles are part of the wine's charm, it still retains a silky almost guzzleable (I'm making that word up, but you know what I mean, right?) quality. 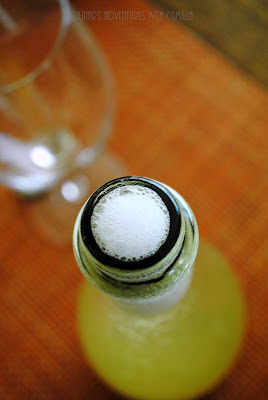 But, resist. Don't guzzle this! Sip it, savor it, and enjoy every drop...preferably with your toes in the sand. 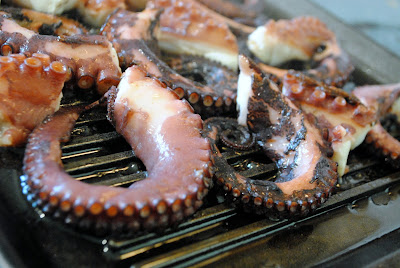 Grilled octopus is something that I first tried in college when one of my philosophy TAs invited us over to his house for a barbeque. He pulled the octopus out of bucket and tossed it on the grill. I was in love...with the dish, not the TA! Just wanted to be clear.


It does take time as the octopus is braised, then marinated before it's grilled just before serving. But, I think, it's worth the effort! 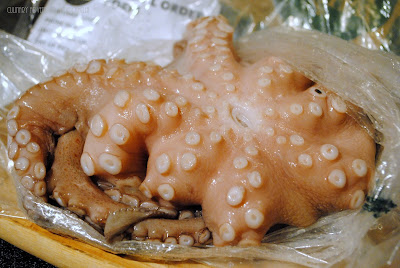 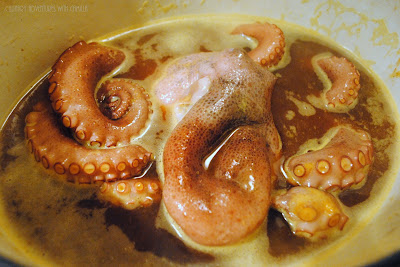 Pour sesame oil into the cooking liquid. Let both the octopus and the liquid cool. Then pour the liquid over the octopus in a dish with a lid and marinate in the refrigerator overnight, or at least 4 hours. Bring the octopus to room temperature before cooking. While the octopus is warming, roast your potatoes. 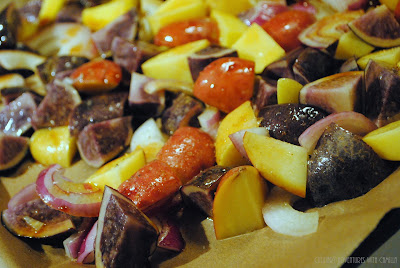 Preheat oven to 400 degrees F. Place bite-sized pieces of potato and onion in a large mixing bowl. Drizzle with olive oil and toss to coat. Turn the potatoes onto a parchment-lined piece of paper. Sprinkle with salt and pepper. Roast for 40 minutes. The potatoes will be browned and crisped on the outside, soft on the inside. 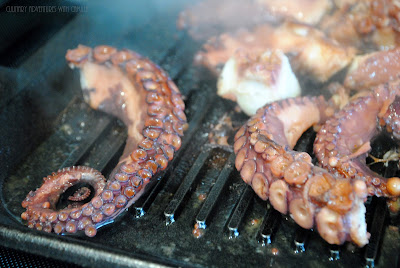 Octopus
Heat a large skillet or a grill pan, preferably cast iron, over medium-high heat. Slice the octopus into large pieces - I like to keep the tentacles mostly intact and cut the body into 2" cubes or so. Grill to get nice char marks on the octopus.


To Serve
Place the potatoes on individual serving plates. Lay octopus pieces over the top and serve immediately.