Can I Live [with a question mark] Collaborative Pop-Up 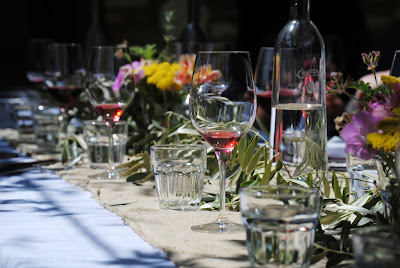 On a sun-kissed afternoon in Carmel Valley, some talented, passionate guys pulled together a collaborative pop-up lunch. But it was not for the faint of heart or palate. We're talking four hours, ten courses, a cocktail, and four different wines. It was a culinary marathon and it reminded me, very much, of my favorite restaurant from when I lived in Rome. There are no menus; there are no choices. You eat what they bring you. And, as Klaus stated, "If you don't like one dish, or can't eat it for dietary reasons, there's another course coming." Remember: ten courses!

The trio behind this Can I Live luncheon: Klaus Georis who has spent the past few years cooking over seas; Jordan Snyder of M.H Bread and Butter in San Anselmo; and David Baron of the soon-to-open Salt Wood Kitchen and Oysterette in Marina. 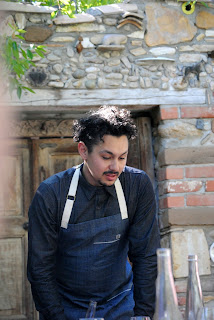 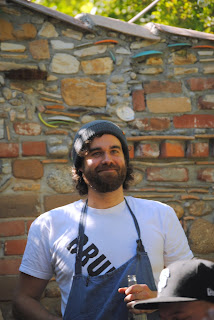 When asked about the name of the event - Can I Live - chef David said that the idea came about when they all had bosses who determined or, at least, guided and approved their menus. David explained, "We just wanted to cook what we wanted and the 'Can I Live' is more an expression of us being able to get creative in the kitchen how we want." So, asked another food writer, why isn't there a question mark in the name? Shouldn't there be a question mark? 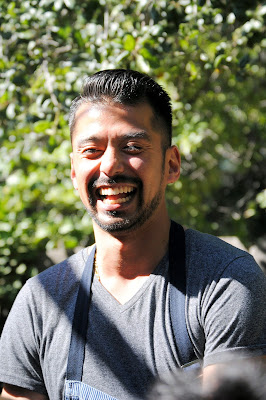 "Yeah, I guess so," assented the chef. That's just another example of the laissez-faire attitude that pervaded the event. But 'laid-back' isn't exactly how I'd describe the crew who cooked, plated, and served ten different dishes in the garden at the old Georis wine tasting room. 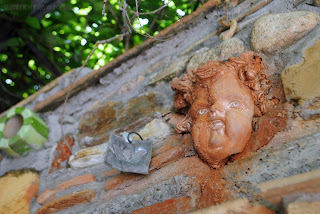 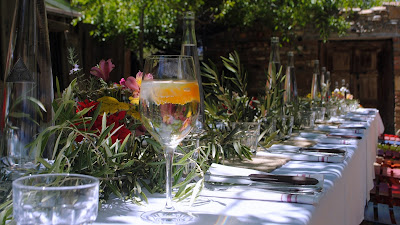 They were clearly having fun, flexing their culinary muscles, and pushing the envelope with different tastes, textures, and techniques on every plate.

Visually, all of the dishes were stunning; it was veritable art on a plate with contrasting colors and shapes. For example, the single roasted clam with kimchi butter sat atop its throne of shells, driftwood, sea-tumbled glass, and salt. And the rich, jewel tones of the grilled summer cherries and stone fruit against a silky pillow of white chocolate were luscious.

Many of the dishes were playful on the tongue. I was reminded of the Italian word 'saltimbocca' - not the pounded veal dish from Rome, but the actual word. While 'saltimbocca' does refer to a specifc dish, the word itself just means 'leaps in the mouth.' That's what I mean in this case. Mouth acrobatics. In the summer squash dish, they used both grilled and pickled vegetables. The resulting bite was an exotic mix of smoky and tangy. Then, they grated bottarga, cured fish roe, over the top to add an alluring saltiness to the dish.

But, as happens when you stretch to create something unusual, some things just don't work. Grilled purslane, for instance. Purslane is a succulent and lends itself well to pickling and is delicious raw. I can honestly say that their Lamb Tartare was a first for me in many different ways as I have never had raw lamb and I have never had cooked purslane. It didn't work for me. But, as Klaus suggested - if you don't like something, just wait, more is coming.

Over the course of the afternoon, we chatted with our tablemates and debated our favorites. Tough call, really tough call. What was evident: all of us appreciated something different about the dishes. It really was a 'something for everyone' meal. But, if I had to pick my personal favorite, I would say the Morels with Miso. 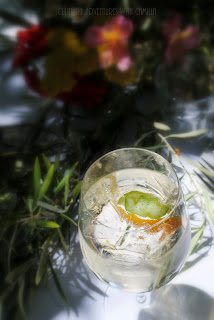 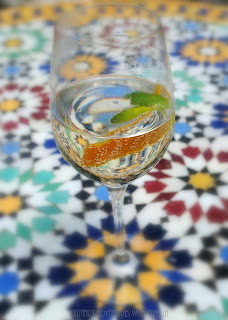 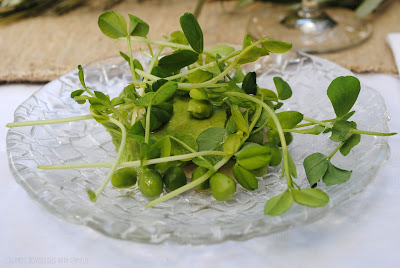 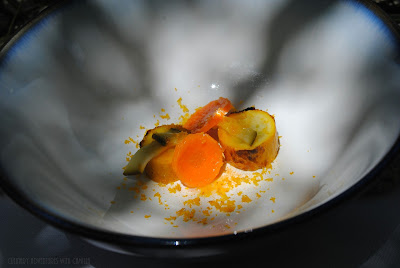 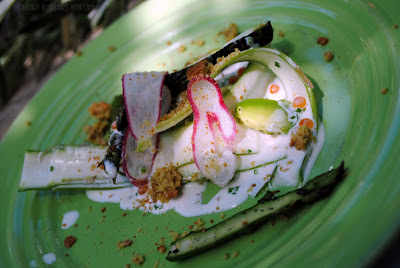 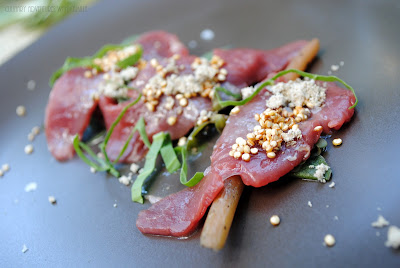 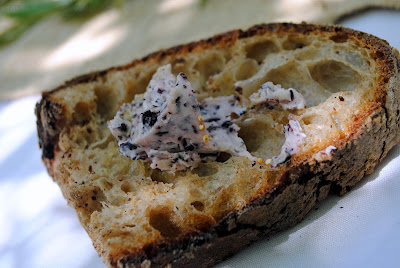 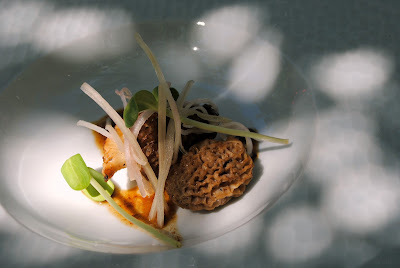 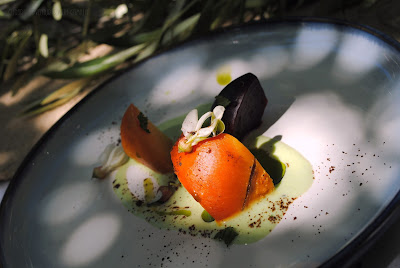 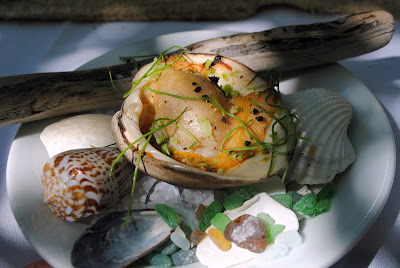 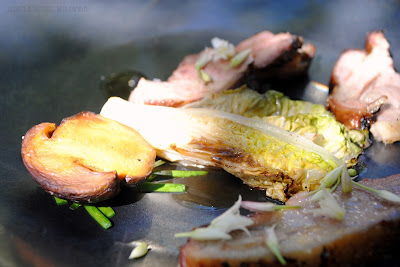 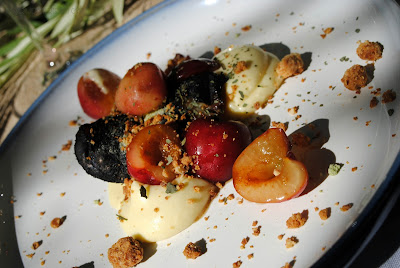 Along with the multiple courses, we had multiple pairings with selections from Cowgirl Winery and Georis Winery. They poured the Cowgirl Picpoul; the Georis Les Abeilles, an elegant, crisp rosé that Damien Georis said was 'a rosé for red wine drinkers'; the Georis Chardonnay was poured for both a savory and the dessert; and the Georis Pinot Noir rounded out the offerings. 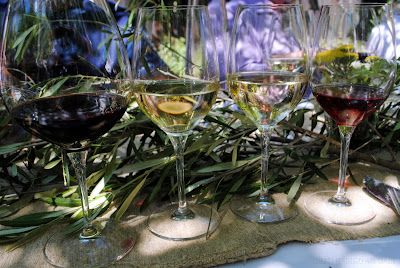 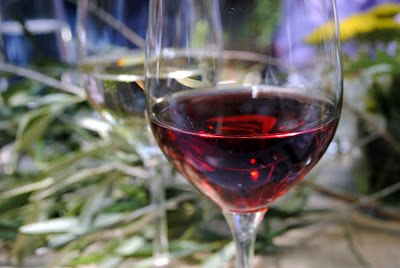 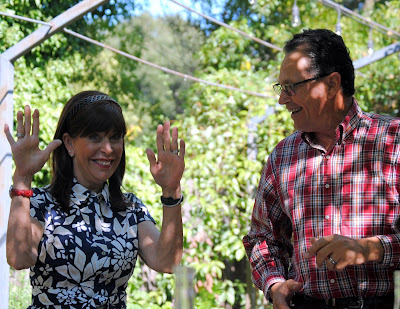 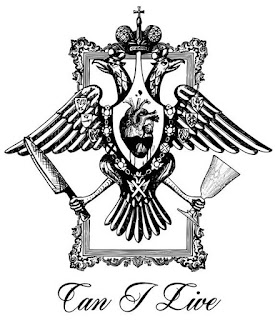