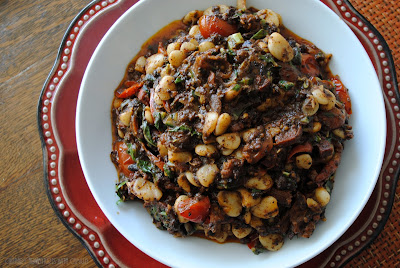 This month's Food'N'Flix event was hosted by my friend Evelyne over at CulturEatz. You can read her invitation: here. She asked us to watch Volver.*

The title of the movie didn't sound familiar, but once I popped in the DVD, I kept having strange déjà vu. About the third time I thought to myself "______ is about to happen," and it did, I had to admit that I must have watched it before!

The instant the movie begins, you have a sense it's going to be a strange one. The boys were coming in and out when I was watching it, asking, "Why are you watching a telenovela?"

It's not a telenovela.

It does, actually. There's sex, scandals, heartbreak, and death.

This film, to pull from one scene when there's blood on Raimunda (played by Penelope Cruz), is about "women's troubles." It's about women across generations helping each other, hurting each other, and forgiving each other. Think incest, murder, extramarital affairs, and secrets. Lots of secrets. There are comedic moments; there are dramatic moments. There's a supernatural element in the form of the insanity-inducing East wind. 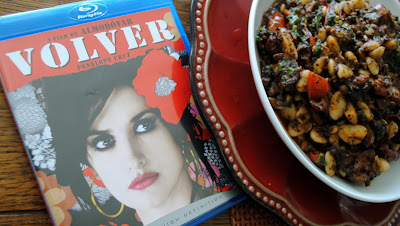 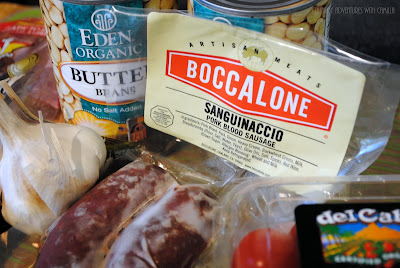 On the Plate...
There was plenty of food inspiration to be found. On a trip to their village, Raimunda, her daughter, and her sister eat donuts; and while at Aunt Paula's, they devour wafers. They call them wafers, at least in the subtitles, but they look like churros.

Raimunda does take over a local restaurant and caters for a film crew. We see her cooking, her menus, and a dinner party. On the menu I saw: Tortilla y Morcilla, Mojito, Authentica Caipirhna, and more.


I already mentioned the scene of her chopping bell peppers and there was one shot of her unmolding a giant flan. 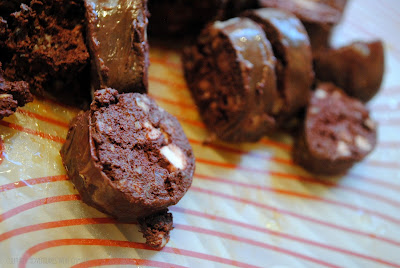 I was inspired to make Fabada Asturiana, often simply known as fabada, a hearty Spanish bean stew made with morcilla. Well, sort of. Morcilla is a Spanish blood sausage. I got my hands on some sanguinaccio which is an Italian blood sausage. While the Spanish version usually includes rice, this version, from Boccalone, uses buckwheat groats. Close enough. This recipe is originally from the province of Asturias, but it's now widely available throughout the whole of Spain. 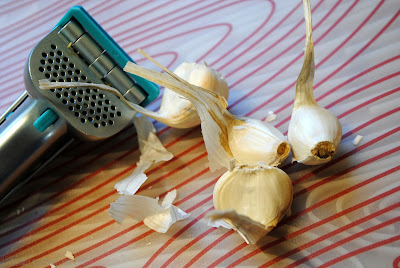 Procedure
Melt butter in olive oil in a heavy, lidded pan. Add the garlic and cook until the garlic is fragrant, but not browning. Stir in the chorizo and blood sausage. Cook until the blood sausage is firm; it might crumble and not longer be in the shape of the coins - that's fine! 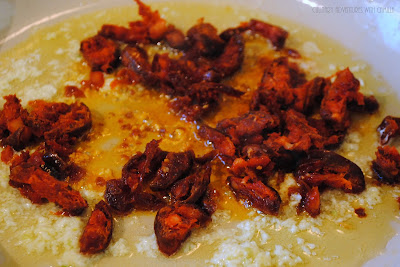 Stir in the tomatoes and cook until they begin to soften and lose their shape. Pour in the red wine and stir in the bay leaves and thyme sprigs. Simmer for 10 to 15 minutes.

Add in the cooked beans and stir to combine. Pour in the water and bring to a boil. Reduce heat to a simmer and cover. Simmer for 25 to 30 minutes. Everything is fully cooked, at this point, you're just letting the flavors meld. Remove the bay leaves and thyme stems. Spoon into a serving dish. 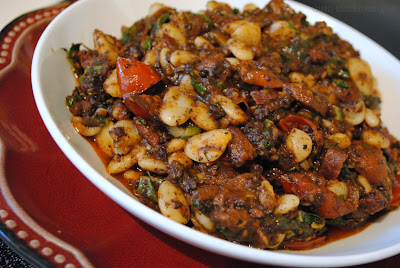 Serve the fabada with a side of crusty bread and a glass of the red you used to cook the dish. Salud! 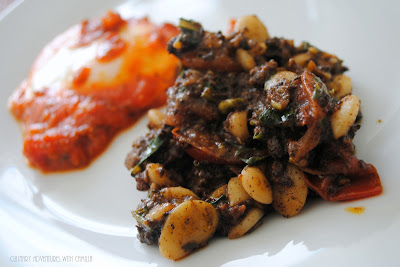 You still have a week or so if you want to join Volver fun. Or, next month, Sarah from Chef Sarah Elizabeth will be hosting Dirty Dancing. Stay tuned for more information about that.