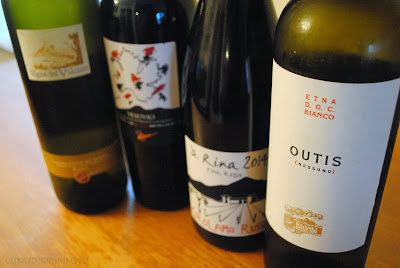 When I extended an invitation to the #ItalianFWT bloggers last month, I wasn't sure what I planned to uncork and pair as we talked about scorched terroir, volcanic wines, Sicily, and Campania. So. Many. Possibilities. And all of those topics were fair game.

Here's what the #ItalianFWT bloggers have in store for you...

As for Me...
I did what I always do when I need expert Italian wine advice: I asked my friend who lived in Italy for many years, is married to an Italian, and owns two Italian restaurants. Yep, she's my go-to gal and I am grateful for her expertise and generosity. 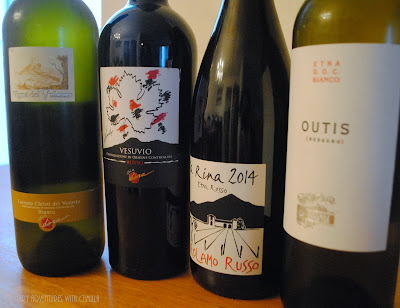 So, I have four bottles from around Mt. Etna in Sicily and Mr. Vesuvius in Campania. One red and one white from each region. I will be publishing the recipes separately so this post doesn't grow to Iliad-lengths.


To Etna
Vineyards have flourished on the slopes of Mt. Etna since as far back as the 6th century BC when Greeks first colonized Sicily. Despite that, Etna wines languished in obscurity for much of the modern era. And though Mt. Etna received DOC status in the mid-20th century, it's been fairly recent that the region has begun to reestablish itself as a major player in premier wine production.

Etna’s primary grape-growing zone lies on the slopes of Mount Etna at 3500 feet or more. The steep slopes and terraced vineyards make access difficult, so much of the tending and harvesting of the vines is done by hand. It's arduous and expensive. But the elevation and severe temperature variations from day to night add complexity to the flavors of the grapes. And the soil on Etna is rich with volcanic nutrients. 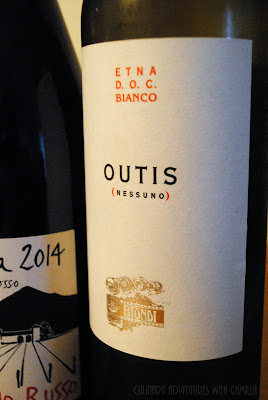 I know what 'nessuno' means. No one. Nobody. Outis is the word for 'nobody' in ancient Greek. And, in Homer's Odyssey, it's the name Odysseus gives himself when fleeing from the cave of Polyphemus the Cyclops on Mt. Etna. Odysseus encountered Polyphemus and became trapped in the cyclop's cave. To escape Odysseus plied him with wine and, then, plunged a burning stake into the creature's only eye.

Winemaker Ciro Biondi allows the distinct terroir of Etna’s steep southeastern slope to speak through his wines. Outis Etna Bianco is made predominately from the Carricante grape and blended with softer indigenous grapes. Carricante, an ancient white wine grape, is said to have been growing on Etna for over a millennium.

The first word that comes to mind to describe this wine is 'racy.' While I get energizing aromas of ginger and pepper, on the palate the wine is remarkably tender with the sweetness of ripe summer stone fruits. But it's the mineral finish that sold me on this wine. 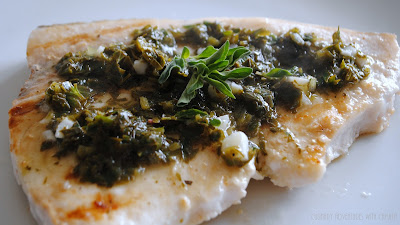 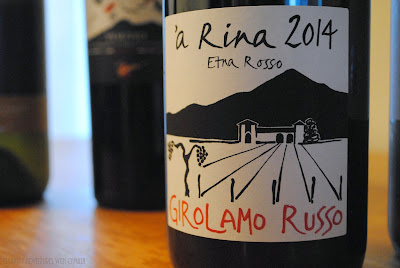 This classic Etna Rosso blends the ancient indigenous grape varieties of Nerello Mascalese and Nerello Cappuccio; both are grown on the volcanic slope of Mt. Etna and some of the vines are over a century old. 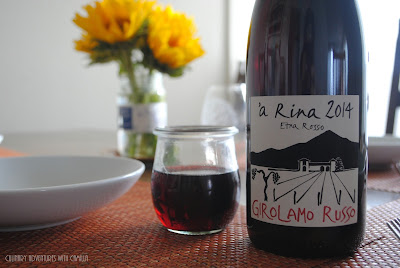 'A Rina is beautifully colored with an intense ruby hue. On the nose it's intense with aromas of cherry and tobacco. I would describe it as 'Rubenesque,' as in, you know, pleasingly full and round and simultaneously supple and silky. 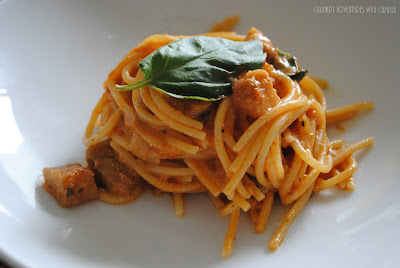 I paired 'a Rina with Pasta alla Norma.

According to historic texts, winemaking on the slopes of Vesuvius pre-date Christ by many centuries. Aristotle wrote that the ancient Thessalians planted the first vineyards in the 5th century BC. After the rise of Christianity, monks who lived nearby continued to cultivate grapes and make wine.

The vines of Mt. Vesuvius are directly descended from those brought to Italy by the people of ancient Thessaly. The volcanic soil is dark and porous. The porosity allows vines to remain unirrigated as the soil retains its moisture for long periods of time. 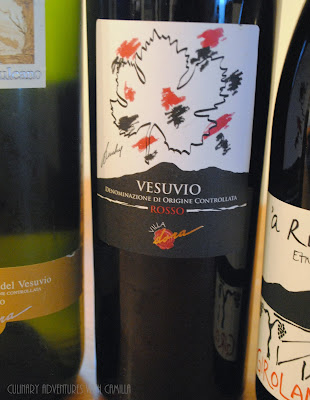 The Villa Dora Vesuvio Rosso is a red wine from Vesuvio made from Piedirosso and Aglianico grapes. With a vibrant red color and purple reflections, I got cherries on the nose and velvet on the tongue. 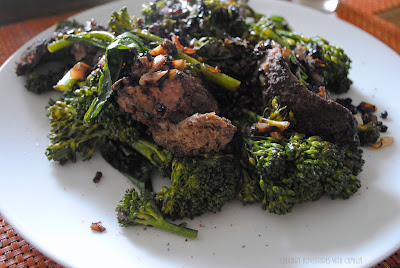 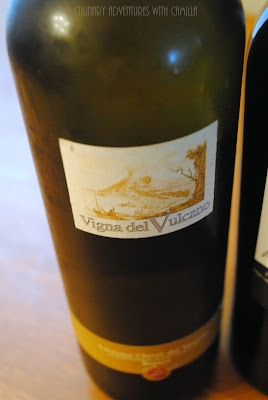 
The first time I had Lacryma Christi, I had just spent the day exploring Pompeii with two other au pairs. It turns out that we had all taken Latin in high school. Me in America, Rikke in Denmark, and Catherine in England. And, despite the distance between all of our schools, we had all used the same books. Caecillius est pater. Matella est mater. Quintus est filius. Are you with me?? Then you probably took Latin, too.

We had wandered the ruins, reading everything we could find, feeling accomplished that we understood the writing on the ruins. It was a thrilling, but exhausting day. So, before the long ride back to Rome, we grabbed a couple of bottles of red wine for the train. We had no idea what we were getting. We had just ducked into a store and asked, in Italian, for the wine that they would drink after work. Sitting at the train station, we were intrigued by the name. 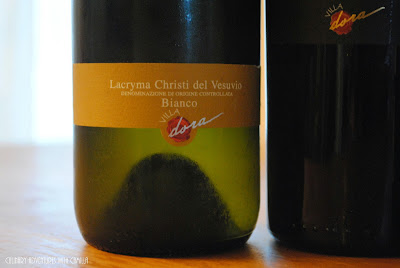 The name Lacryma Christi means 'tears of Christ' and it has its roots in a number of legends. The most repeated, however, is that when Lucifer was cast out, he took a piece of heaven. When Christ saw Italy's Gulf of Naples, he recognized it as the stolen piece and wept over the loss. Legend has it that vines of Lacryma Christi sprang miraculously from the ground where his tears had fallen.

Anna had told me that this was going to be the most complex of the wines she was suggesting. Also, it was one of the last bottles of the last case of this vintage. Wow. And she was correct; it's almost indescribable.

This is an interesting wine - and I mean that in the best possible way. There are so many different flavors at play, but they all manage meld together into something fantastic. 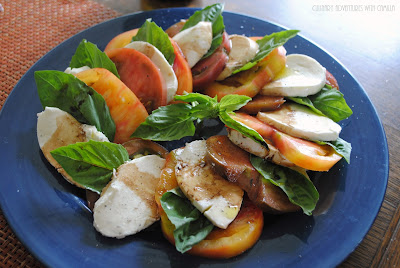 I paired Vigna del Vulcano with a simple Insalata Caprese

Here are the next few months of #ItalianFWT.