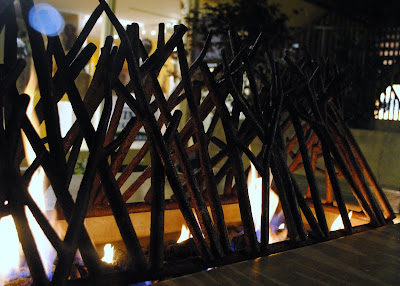 Carmel is home to a ridiculous number of restaurants. And they run the gamut: a few are fantastic, many are good, several are mediocre, and - truth be told - there are some that are only for tourists. That's just the reality.

Jake and I have a handful of favorite spots we frequent over and over. There are restaurants we have only eaten at once. And there are some places that have never even made the list. When the boys were smaller, I would ask myself: Is it worth the cost of the babysitter plus the restaurant bill? Now that they're older, I look at the quality and creativity of food. I look to be wowed. And I'm pretty tough to impress.

So, with all the press around CULTURA - Comida y Bebida, Carmel's newest restaurant, I wondered if it would live up to the hype. After all, it does have some amazing culinary heavyweights behind it. Read one of Edible Monterey Bay's pieces about the team: here.

When we dropped the boys off at a friend's birthday party last night, we hightailed it over to CULTURA. As I pulled into a parking spot, I asked Jake, "Do you have your adventure pants on? We're going to eat grasshoppers."

I guess we've been together long enough that he didn't even raise an eyebrow to that. I'm ready, he declared.

Oh, before I get to all my tasting notes. I'll just sum it up first: Yes, CULTURA deserves all the attention it's getting. If you have kids that need a babysitter, book one. And, if you want to double-date, call me. I'll go back any day. Preferably soon. Okay? Now that that's out of the way... 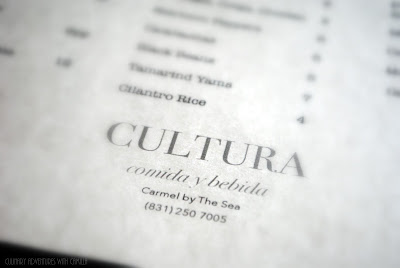 I was serious about the grasshoppers. And they are first on the menu. Chapulines, it reads. I ordered a basket. 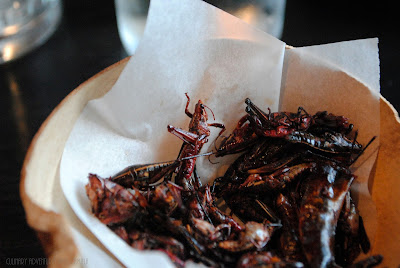 When Nicole, our amazing server brought them, I realized that Jake actually thought I had been kidding. "You ordered those?" Yes. I told you I was going to order grasshoppers. "Okay. I didn't think you were being serious." I'm always serious about food. While I started talking about insects as a good protein source, he popped one in his mouth. 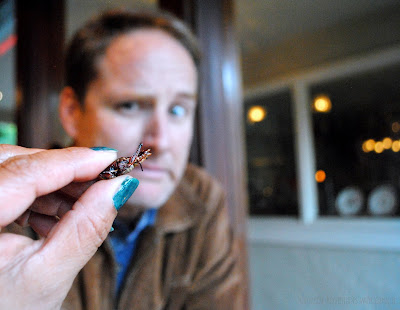 We actually took a small container of them with us and brought them in to the birthday party when we picked up the boys. A few kids were intrigued. In fact, they were more willing than the adults to give them a try. "You ordered these at a restaurant?" one boy asked, incredulously. Yes. "Will you email my mom where it was, please? I need more!" Sure will. 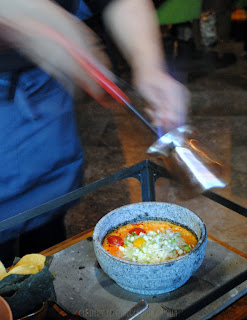 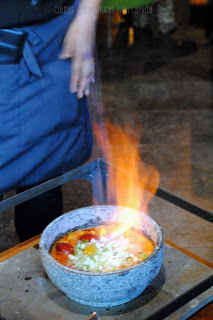 I'll admit: anything prepared tableside that gets set on fire is always going to be at the top of my list. 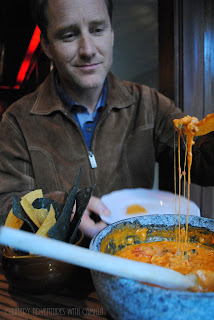 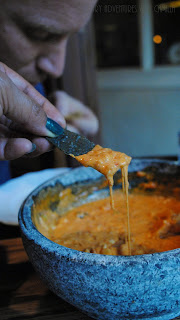 It's smoky, boozy, and cheesy. Plus the cool factor is pretty high on this dish. Enough said. 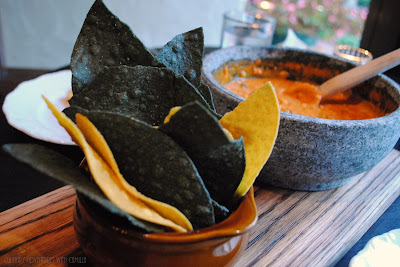 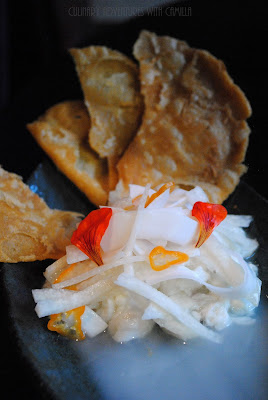 Of all the dishes we tried, this was my least favorite. Not that it wasn't good, it was. But I prefer my ceviche with more sour and more heat. Still, the halibut had the perfect texture and the homemade crisped tortillas were delicious. 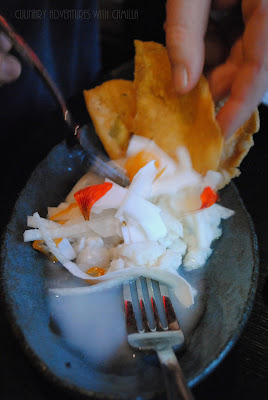 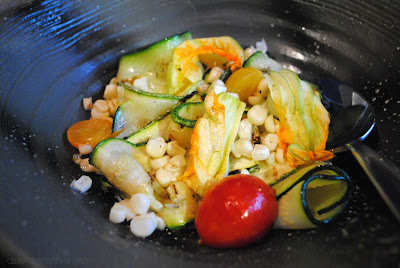 This has all the flavors of summer in a bowl - roasted zucchini, fresh corn, squash blossoms, cherry tomatoes. Tasty and beautiful. 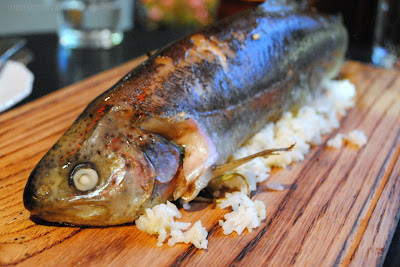 If there is a whole fish on the menu, I'll order it. Every time. 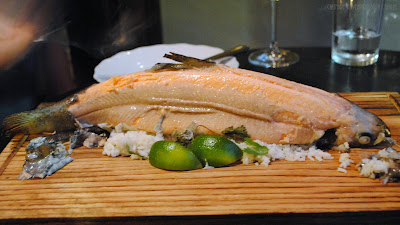 This did not disappoint. It was cooked to perfection and its flavors were subtle and delicate.

If you read my blog even somewhat regularly, you'll know that I am much more of a savory gal. I don't eat a lot of sweets. Jake, on the other hand, I adoringly call my 'sugar pig.' "Did you save room for dessert?" I asked. I was pretty stuffed. I always have room for dessert! he answered. "I figured." 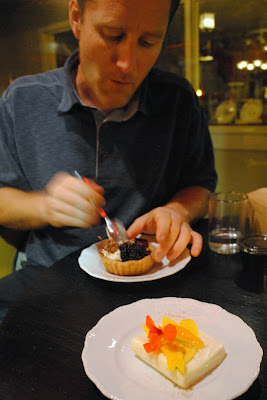 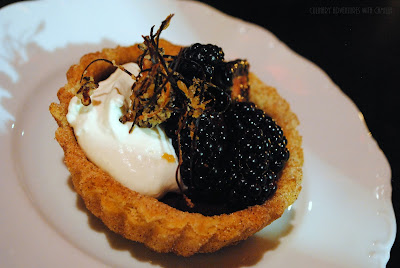 Those four words are deceptively simple. Spiced. Oaxacan. Chocolate. Tart. I don't know what I was expecting, but it wasn't this. I typically taste desserts. One bite. If I really like it, I'll take two. But I wanted to lick the plate. And I probably would have if we weren't in public!

The crust is flaky and cinnamon-laden - like a churro. Then it was filled with chocolate, topped with an anise-whipped cream, fresh blackberries, and candied chile threads. It had so many flavors going on and they all worked well together. 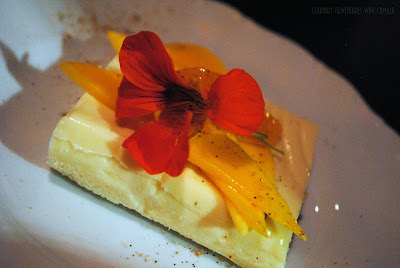 I was first introduced to cremeux by Chef John Cox when he headed the kitchen at Sierra Mar at Post Ranch. It's been a favorite ever since; D even made 25 individual cremeux as his birthday treat at school one year. D wouldn't care for this one because the tequila is so pronounced, but we loved it. Jake and I battled over every last bite. He did willingly give me the nasturtium from the top. 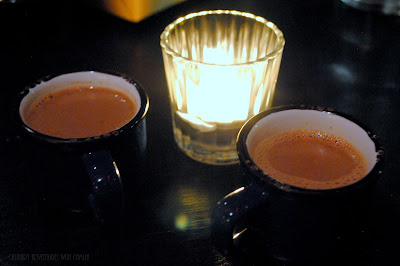 While the desserts were sweet, decadent, and extravagant - everything you want in a dessert, right? - these sipping chocolates were understated and almost savory. They were the perfect accompaniment to all that sugar.

And, lastly, we had to have a Mezcal cocktail. CULTURA has nearly three dozen Mezcals on its menu. Three dozen. Let that sink in for a second. They have everything from Wahaka's 8 year Espadin which is $92 for a 2-ounce pour to Vago's Elote-Aquilino Garcia which will run you less than $20. We opted to taste one of their signature cocktails. 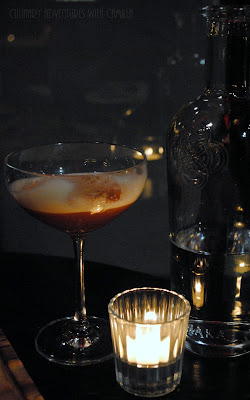 I sneaked two sips, but was the designated driver for the evening. So, Jake enjoyed it. But two sips were all I needed; it was a potent - and delicious - cocktail. We'll definitely go back to explore more of those creative libations. El Destilado - The Distilled with its almond-infused Mezcal, fino sherry, chamomile, and elderflower caught my eye. 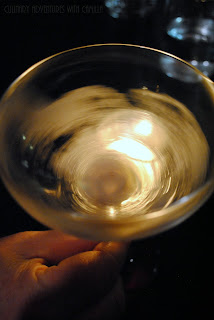 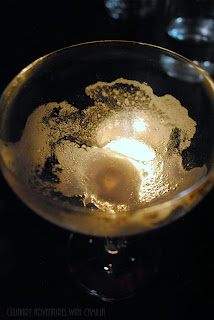 So, that's a wrap on our culinary adventure at CULTURA. All the press and the hype are well-deserved. The food is innovative, well-done, and at a reasonable price-point. The vibe is hip but cozy. I'd go back in a heartbeat. Thanks to our server Nicole. And hats off to everyone behind the restaurant. Great job. Really. Bravi.