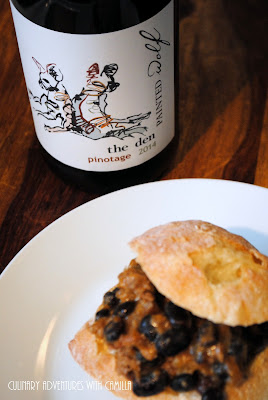 This weekend, the Wine Pairing Weekend crew - #WinePW on social media - is on a virtual journey to South Africa. This month Sarah of Curious Cuisiniere is hosting; read her invitation. Join the conversation on Twitter on Saturday, August 13th, at 8am Pacific.

What the #WinePW Crew is Pouring... 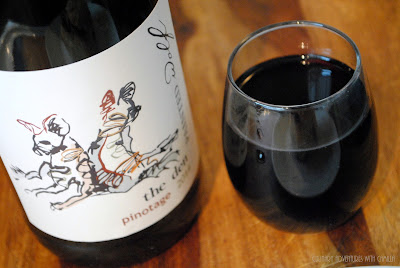 In My Glass...
The two quintessential varietals in South Africa seem to be Chenin Blanc and Pinotage. I found a 2014 Pinotage from Painted Wolf Wines and was thrilled with my selection. Pinotage is completely new to me. It's a red wine grape that was bred in South Africa in the early 20th century. It's a cross between Pinot Noir and Cinsaut which is also called 'Hermitage' hence the portmanteau name of Pinotage.

Painted Wolf Wines produce wines from grapes that are mostly dry-farmed and produced organically or with minimal non-organic inputs. The grapes for their Pinotage were harvested over a two-week period in early 2014 from Kasteelsig in Malmesbury and from Leeuwenkuil on the Agter Paarl-Swartland border.

I found the Pinotage beautifully rounded with bushels of berry notes paired with some spice and earthy wood tones from its time in oak barrels. 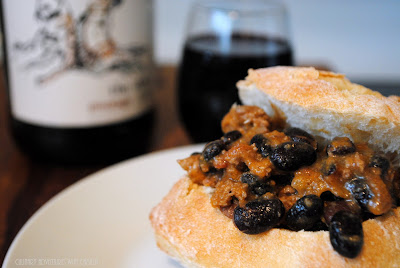 On My Plate...
We have cooked South African cuisine before and it's always been a hit. In fact, I did a South African Soirée for one of my best friends' birthdays years ago (I think it was six years ago now). I made boontjiesop, bobotie, geelrys, three different sambals, melktert and poured cordials of Amarula liqueur for dessert. We also made a version of bobotie when we made a dinner from Lesotho, a country completely surrounded by South Africa. So, I wanted to try something new.

Enter Bunny Chow. It's a well-loved dish that originated a hundred years ago in the curry houses of Durban, a South African city that houses the largest Indian population outside of India. Bunny Chow is a hollowed out piece of white bread filled with a spicy curry. Its portability circumvented one of the race laws that banned African diners from eating inside Indian or Malay restaurants.

But, about the name, the cheapest curry that was sold - for half a penny! - was made by the Bania caste in Durban. The curry was made of dried sugarbeans and, since some poor South Africans didn't have plates or utensils, they asked the sellers to spoon the bean curry into hollowed out bread whose top was, then, used as a spoon. 'Chow' just referred to food. So Bania Chow transformed into Bunny Chow. There is no rabbit in the dish though I am sure that would be tasty, too.

Procedure
In a large, flat-bottom pan toast the star anise, cinnamon stick, cardamom pods, fennel seeds, and cumin seeds until dry and fragrant. Let cool, then grind with a mortar and pestle or in a spice grinder. Set aside.

In a large pot, cook the onions, garlic, and ginger until the onions are softened and translucent. Add in the toasted spices and cook for 2 to 3 minutes. Add in the ground lamb and cook until browned. Stir in the cooked beans. Pour in the tomato sauce and wine. Stir in remaining spices and bring to a boil. Reduce heat to a simmer and cook until the sauce is thickened and reduced, approximately 30 to 35 minutes.

To serve, cut the top of the roll off and scoop out some of the inside bread. Spoon the curry into the bowl and serve immediately. 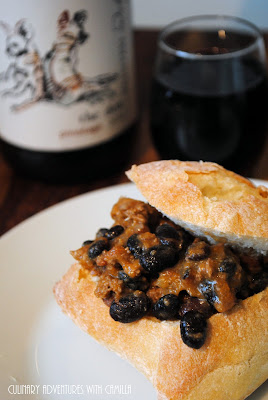 Coming Up for #WinePW
Our September #winePW theme will be “Grüner Veltliner Pairings,” on September 10th, 2016. The event will be hosted by Martin at ENOFYLZ Wine Blog, so keep an eye out for details!

For a list of past and upcoming #winePW event, visit the Wine Pairing Weekend calendar. We’d love to have you online with us!