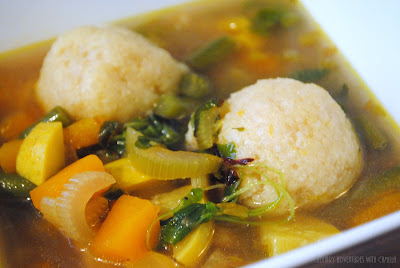 This month, for August's Food'N'Flix, Kimberly at Coffee and Casseroles is hosting us as we watch Hotel Transylvania 2.* Here's her invitation.

Kimberly readily admits: "Okay, while not a 'foodie' movie by some standards, there is plenty of food ideas running around here. Many, which are talked about more than seen, and many that are 'monster versions'.  I thought with the timing of season, a lighter film would be good for all. And take note, it is a sequel, but no you do not have to have seen the first to enjoy the second."

My boys were all too thrilled to watch this movie again, especially for me to sit and cuddle with them even if I did have a notepad in my hand.

Next month, Eliot's Eats hosts as we watch Frida. Stay tuned for more on that next month.

On the Screen...
We have seen Hotel Transylvania 2 before, but we settled into the couch and re-watched it with our foodie glasses on this time. The gist of the plot: Mavis, a vampire, marries Johnny, a human, and they have little Dennis who is about to turn five. Mavis' father, Dracula, is concerned that his grandson is not a vampire though he consistently says that Dennis is just a "late-fanger." While Hotel Transylvania 2 is admittedly strangely-plotted and races through years in mere minutes, this actually works well for the movie.

There was, surprisingly, a lot of food - from avocados ("they are a good fat, whatever that means!") to slurpees and slushies and from screaming wedding cake to blood substitutes in tetras - but the boys were unanimous when it came to what they wanted to make: Monster Ball Soup.


In the movie, Dracula tries to tempt a pregnant Mavis with all her favorite foods. He brings her a bowl of monster ball soup, complete with wailing monster balls.


In the Bowl...
We opted to make Monster Ball Soup because we really do love matzo ball soup. So, it was an easy pick. The only complication for me: my husband is now gluten-free, so I was dreading having to make gluten-free matzo and crush it into meal. Or so I thought. Then I was on one of my favorite online food purveyors and saw gluten-free matzo meal. Easy peasy! 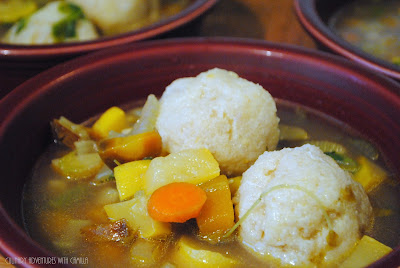 We like our matzo ball soup teeming with vegetables, so I chopped up all of the vegetables I had leftover from last week's CSA box. Also, while the gluten-free matzo meal came with a soup mix, I made everything else from scratch. 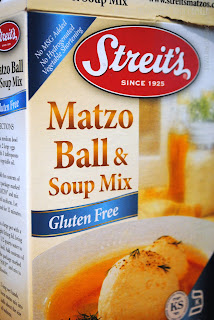 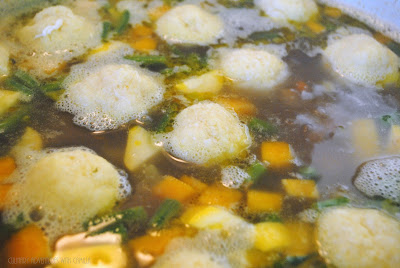 Procedure
Place celery, carrots, and onions in a large souppot or Dutch oven. Add a splash of olive oil and cook until the onions are softened and translucent.

In the meantime, place the gluten-free matzo meal in a small mixing bowl. Whisk in the eggs and oil. Stir until everything is moistened. Cover and refrigerate for at least 20 minutes. 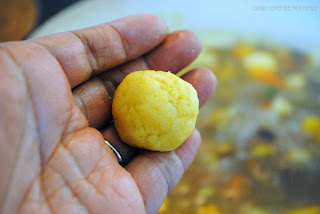 Moisten your hands and form walnut-size balls out of matzo mixture, dropping each one into the boiling liquid immediately. Once all balls have been dropped into the broth, reduce the heat, cover and gently simmer for 30 minutes. The matzo balls will expand...don't be alarmed.

Add in whatever fresh herbs and greens you have. Just let them barely wilt. Season to taste with salt and pepper. Ladle soup into bowls and serve immediately.