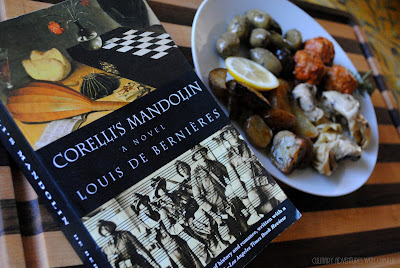 It's hard to believe that our year-long journey of the Book Club Cookbook Cooking Project is drawing to a close. And, to finish off the year, I chose Corelli's Mandolin by Louis de Bernières. Click to read my invitation. And stay tuned for a wrap-up of all the recipes from this book. Soon. 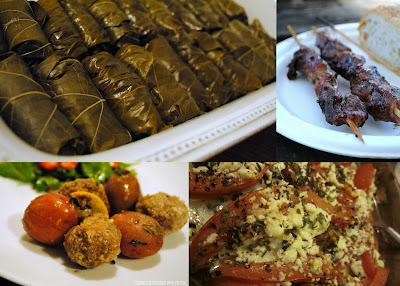 We love Greek food and have made a fair number of recipes, including Stuffed Grape Leaves, Souvlaki Arni, Bouyourdi, Befteki and Potatoes. So I was excited to read the book (again) and find inspiration in the pages. 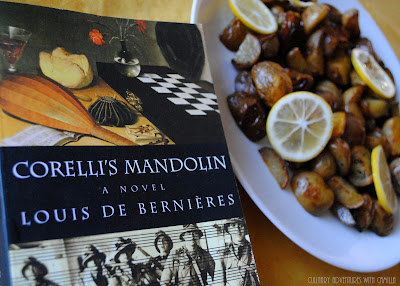 I had read the book years ago - and saw the movie right after that. I wanted to re-read it with an eye on the food. Even still, I was captivated by the story. And I really can't categorize the story into a single category. It's a historical novel; it's a tragedy; and it's a love story. Antonio Corelli is an Italian soldier who, under Mussolini's orders, has occupied the small Greek island of Cephalonia. Corelli is billeted in the house of Dr. Iannis and his daughter Pelagia. The story plans over five decades from the invasion of the island till Corelli and Pelagia are old and grey. And, like any epic love story, it's not without its roadblocks. 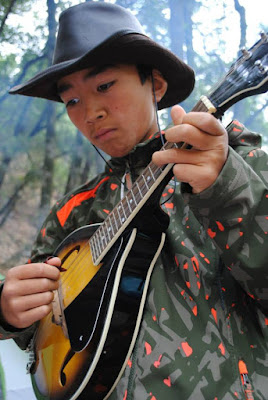 I will say that the mandolin, specifically its strings, save Corelli's life. I can never look at my son's mandolin the same again!

One of my favorite passages from the book...

All their lovers' talk began with the phrase "After the war".

On the Strings...
I already mentioned that my Precise Kitchen Elf plays the mandolin; it was the instrument he asked picked for his 8th birthday. I remember thinking, "Really? You can't pick an instrument that I can actually find somewhere locally?!?" But he was adamant. His first grade teacher played the mandolin and he'd had it in his head since then that he was going to play it, too. So, with some birthday money from both sets of grandparents, he bought his mandolin. He's been playing ever since. He just turned 14 and is so, so good now. Am I allowed to say that...since I'm his mom?!?

I really love when he bring his mandolin on our camping trips! 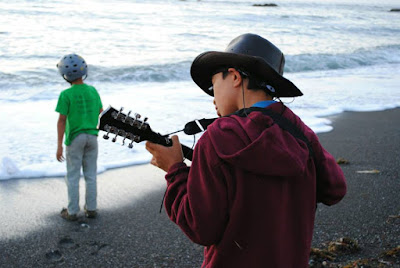 I'm wondering if anyone else can get to this (I don't know where this video lives besides on Facebook!): R and his teacher playing Zorongo back in 2011. And Pipeline, also in 2011. I definitely need to get a new clip of him playing. I had intended to do that this month - for this post - but it's been crazy around here. I'll get a recording one of these days. But this post is about the book and the food. 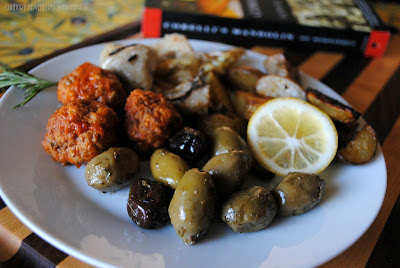 On the Plate...
Though I really did want to make the Spanokopita in the cookbook, I have yet to find gluten-free phyllo dough and I didn't want Jake to miss out. So, I went a different direction and wanted to make some new-to-us recipes. I settled on two and served them with Greek Olives and a salad. Dinner! 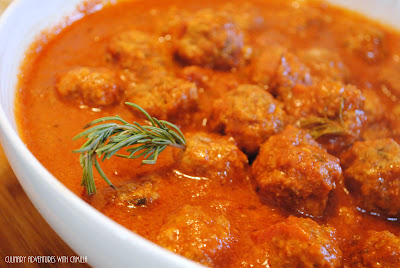 Procedure
Meatballs
In a large mixing bowl, combine the ground meat with all of the other ingredients. Mix until thoroughly blended. Cover and place in the refrigerator for 1 to 2 hours to let the flavors blend. Remove the meat from the fridge and let stand on the counter for another 30 minutes.

Sauce
Place tomatoes into a blender or food processor and blend until smooth. Pour the tomatoes into a large, flat-bottom pan. Add the remaining ingredients and bring to a simmer. By then the meat should be ready for forming into meatballs.

Meatballs
With moistened hands, pinch off walnut-sized pieces of meat and shape into balls. Drop the meatballs into the simmering sauce. Stirring occasionally, simmer until the meatballs are firm to the touch, approximately 30 minutes. 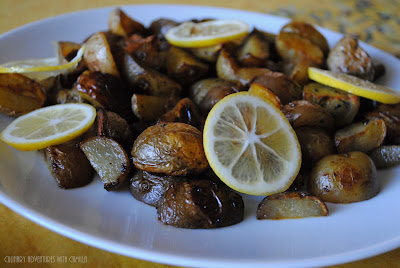 Procedure
Preheat oven to 400 degrees F. Place bite-sized pieces of potato and crushed garlic in a large mixing bowl. Drizzle with olive oil and lemon juice; toss to coat. Turn the potatoes onto a parchment or silicone-lined baking sheet. Sprinkle with salt and pepper. Roast for 40 minutes. The potatoes will be browned and crisped on the outside, soft on the inside. Serve immediately with slices of fresh lemon.

Giveaway
This month I, as this month's host and the final host, am giving away two copies of the book.* Enter to win a copy of the cookbook!

TWO of our lucky readers - US and Canada only! - can enter to win a copy of The Book Club Cookbook, Revised Edition: Recipes and Food for Thought from Your Book Club's Favorite Books and Authors by Judy Gelman and Vicki Levy Krupp, courtesy of Tarcher-Penguin. Giveaway runs from July 1st till August 1st at 6 o'clock PM, Pacific time. Please see terms and conditions in the rafflecopter widget below. Many thanks to Tarcher Books. You may find Tarcher: on the web, on Facebook, on Twitter, and on Pinterest.

a Rafflecopter giveaway
*Disclosure: I received a complimentary copy of The Book Club Cookbook, Revised Edition: Recipes and Food for Thought from Your Book Club's Favorite Books and Authors by Judy Gelman and Vicki Levy Krupp as an opportunity to give two copies away. Opinions are our own. We received no further compensation for our posts.

**This blog currently has a partnership with Amazon.com in their affiliate program, which gives me a small percentage of sales if you buy a product through a link on my blog. It doesn't cost you anything more. If you are uncomfortable with this, feel free to go directly to Amazon.com and search for the item of your choice.