By Camilla M. Mann July 27, 2016
Not all pizza is created equal. And, I'll be honest: I'm a pizza snob. Having lived in Italy for over a year after I graduated from college, I have had a lot of pizza. A lot. 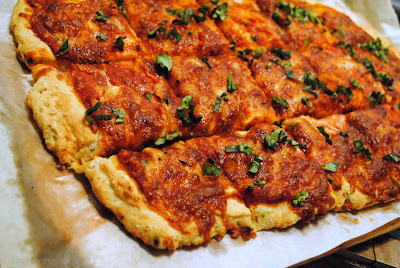 Pizza was my go-to snack with the kids for whom I was an au pair. And, after my work contract ended and I rented an apartment in Trastevere for my final two months in Italy, there was a rosticceria just around the corner that became a favorite spot to grab dinner when it was too hot to cook in my house which was remarkably often in the middle of the summer.

The (literal) hole-in-the-wall only did takeaway pizza al taglio sold by weight, roasted chicken and potatoes, and supplì. It was fabulous. Additionally, there was an enoteca just next door to it. So, I could grab pizza and wine, sit in the piazza, and read a book or watch people go by.

Roman pizza is thin crust and shaped in a rectangle. You buy it by the weight and they fold it in half - like a sandwich - and wrap it in parchment for you. On any given day, they would have half a dozen different kinds of pizza. My favorites were porcini mushroom, pizza bianca, zucchini, and potato.

When Jake went gluten-free last year, I struggled with the loss of our pizza nights. I tried cornmeal crusts. I made cauliflower crusts. They were okay. Passable. But they weren't great.

Now, after many months of experimentation, all three of my boys - my gluten-free husband and my gluten-loving kitchen elves - like my gluten-free dough. I still think it needs work. It's thicker than I would like, but it'll do. And, I dare say, if you didn't mention it was gluten-free, they might not know. That's something, right?!?

Something to note: this gluten-free dough does not look or act like regular dough. It's not elastic. It's more like a really, thick batter. But, when baked, it is remarkably like regular pizza.

One thing I've found a necessity when making gluten-free pizza: pre-bake the crust, then top, then bake again. It prevents the finished pizza from being gummy. The only time I don't pre-bake is when I make a potato pizza. But that recipe is for another post.


Pour milk and water into a saucepan and heat until warm to the touch, approximately one minute. Stir in the yeast and brown sugar and let bloom for 5 minutes.

Pour the milk mixture into the flour mixture and beat with a wooden spoon. Stir in one egg and olive oil. Beat till smooth. If the dough looks too dry, add another egg. This dough should be smooth and thick. Cover and let stand for at least 20 minutes.

Preheat oven to 400°F while the dough rests. Line your baking sheet with parchment paper. 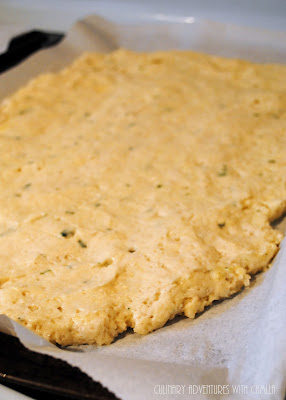 After the dough has rested, scrape the dough onto the parchment-lined pan. Drizzle the ball with olive oil, then press and stretch into a rectangle that's about 1/4" thick. Let rest for 5 to 10 minutes.

Bake until the top is puffed and firm and the underside is crisped, approximately 8 to 10 minutes. Remove from the oven and raise the temperature to 450°F.

Spread sauce over the crust, leaving a slight border around the edge. Sprinkle with mozzarella cheese. Drizzle olive oil over the whole thing and place it back in the oven. Bake until the cheese is bubbling and browned in places. The crust should be golden brown after approximately 6 to 8 minutes.

Remove from oven, drizzle with olive oil, and scatter with fresh basil. Slice and serve immediately.