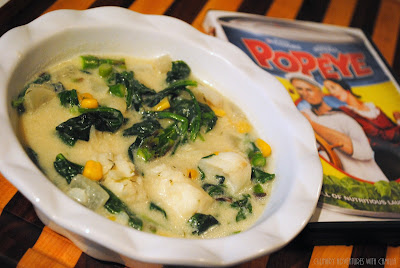 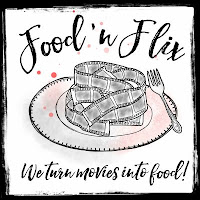 This month Elizabeth from The Lawyer's Cookbook is hosting Food'N'Flix. Here's her invitation. She invited us to watch Popeye.*

On the Screen...
Just like last month's selection, this one was completely new-to-me. I mean, I do know who Popeye is, but I've never seen this movie.

After a long day of unpacking, I asked if the boys would want to watch it with me; and they did. Almost immediately, there was groaning involved. "Mom, I can't understand what he's saying. Why does he have to talk with that pipe in his mouth?"

"Mom, the singing is not so great."

But they sat through it, though my husband declared definitively, "'Baghead' is no longer the worst movie I've ever seen." Great.

So, I won't talk too much about the movie as we really didn't enjoy it. Sorry, Elizabeth!


Popeye (played by Robin Williams) lands in a strange seaside town called Sweethaven. There he rents a room from the Oyls whose daughter Olive (played by Shelley Duvall) is engaged to a surly pirate-type named Bluto. Long story short: Olive breaks her engagement, Popeye and Olive end up together, and they raise a baby that they found in a basket as their own. Along the way Popeye finds his long-lost father and ousts the tax-man who has been harassing the residents of Sweethaven.

Next month, Kimberly at Coffee and Casseroles is hosting us as we watch Hotel Transylvania 2.*

In the Bowls...
The boys asked if I wanted to try to make a 'soup burger' like they served at the Rough House Cafe. They were envisioning something like a sloppy joe. "But," I objected, "it's Popeye. I have to make something with spinach!" It's part of the song: He's strong to the finish 'cause he eats his spinach!  They rolled their eyes and asked if I had been paying attention; Popeye didn't like his spinach in this movie. True, true.

However, my crew loves spinach, so I ran with it. I decided to make a quick chowder with lots of spinach. It was a hit! But first a quick story about spinach. 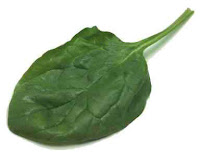 Now that's not a statement you hear often from a child. But for several months, that assertion escaped the lips of both my children more times than I care to recount.

It was always a response to "What kind of leaf is that, Mommy?" If I answered chard, kale, or any green other than spinach, their little noses wrinkled, eyes scrunched, and they would say in annoying unison, "I only like spinach."

Fine! So, I told little green lies. It was all spinach! When I had rough-chopped kale mixed into creamy risotto, when I served oven-roasted tomatoes over a bed of chard, when I chopped beet greens into minestrone...it was all spinach.

We have mercifully moved past that madness and I can finally tell the truth about all of the fabulous greens they are eating. Still, spinach does grace our dinner table at least once a week. 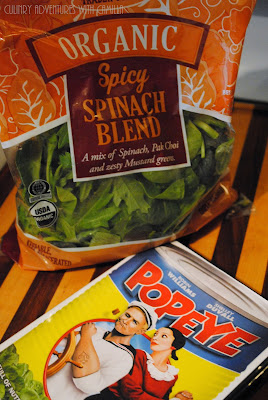 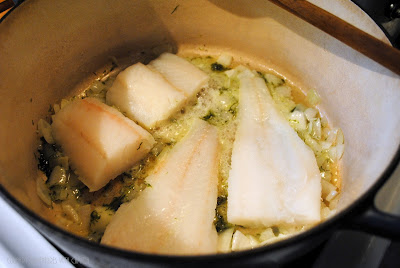 In a large souppot, place the smoked fish and half-and-half. Bring to a gentle simmer over medium heat. Once bubbles begin to form around the edges, take the pot off the heat and allow to infuse until it is cool to the touch. Pour the mixture into a large bowl so you can use the same pot.

Cook onions in a splash of olive oil until softened, approximately 10 minutes. Stir in 1/4 C of the fresh herbs. Place the fish on top of the onions.

Pour the infused half-and-half back into the pot; pour in the fish stock and milk. Add the potatoes. Simmer for approximately 10 minutes. Add in the corn and asparagus. They will cook quickly. Fold in the greens and stir until they are just wilted. 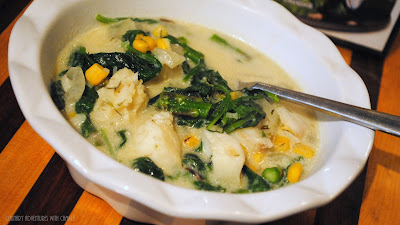 Season to taste with freshly ground pepper. Fold in the remaining fresh herbs and serve immediately. 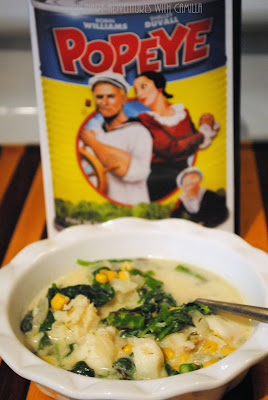