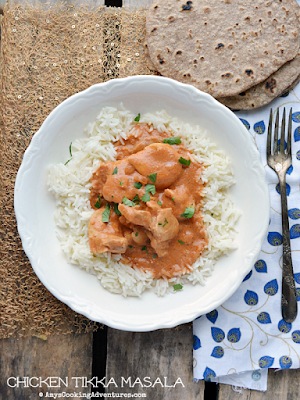 Though the book bored her to tears and the movie totally lost her about half way through, Amy did find food inspiration in both and posted a cross-over post for both events. She writes "Happily enough for me, I was able to find food inspirations in both the book and the movie.  In both, there is the opportunity to focus on French, Indian, or fusion cuisine.  Since I recently tackled French with Classic Croissants, I decided to push myself way out of my comfort zone and try my hand at (probably not very authentic) Indian food." 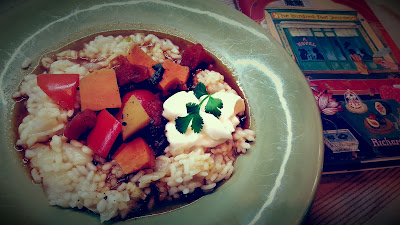 Debra admits something she never thought she'd say: "I think I enjoyed the film more than the book."
She found the film more upbeat and joyous than the book and she was struck by the other worldly look of the scenery. Adding to the dreamlike timelessness was that Hassan’s unique and inherent culinary talent almost borders on fantasy. She shared a spicy Indian dish that features some of her home-grown sweet potatoes. 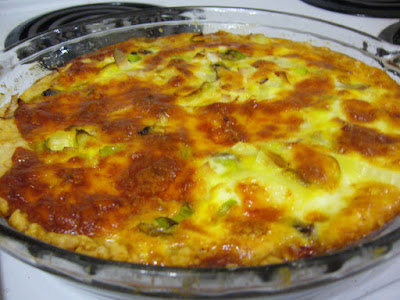 
Bacon-Wrapped Asparagus
by Terri at Our Good Life 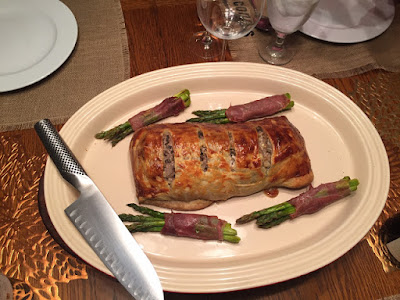 She writes that Hassan's passion for French haute cuisine combine with his mysteriously talent to combine the two cultures. Terri opted for a simple but classic French vegetable preparation of asparagus and bacon, inspired by this cookbook:  Around My French Table. 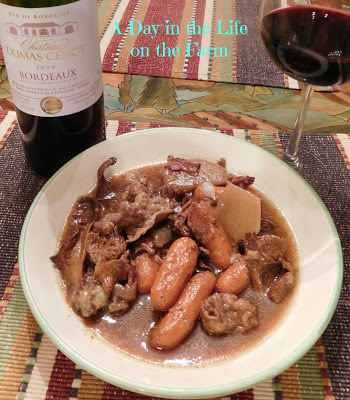 Wendy gushes: "I loved this movie and can't believe I had never even heard of it.  It is one of those movies that I wouldn't mind watching over and over again.  And the food!  The entire movie is a feast for the eyes. I was overwhelmed and wanted to make everything!!" She decided on a fusion of flavors and made an Indian Spiced Beef Bordeaux. 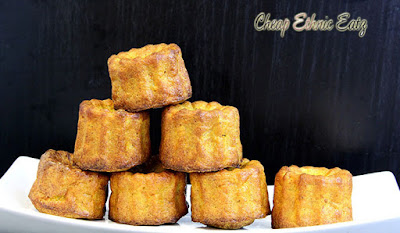 Evelyne fused together both Indian and French flavors. She shares: "I wanted the French side of my recipe to represent a nearby culinary tradition. Canelés are best know as sweet confections that are baked in a special mold called canelé, which means fluted. They are know for a dark golden crisp exterior. These are called canelé bordelais as they come from the region of Bordeaux, which is next to the Midi-Pyrénées."

Her Carrot Curry Canelés are a perfect savory treat, combining flavors of vegetables and perfumed Indian spices in a completely French package. And they inspired me to order some canelé molds. Fingers crossed mine look as tasty as these.


Masala Omelette
by Heather at All Roads Leads to the Kitchen 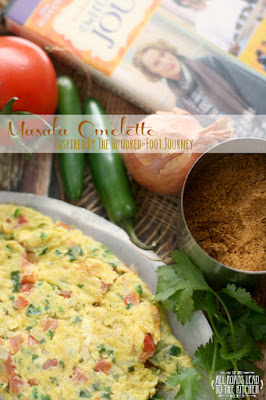 As a nod to Hassan's confidence and talent,Heather shared an omelette inspired by The Hundred-Foot Journey. Her description had me drooling on my keyboard: "Studded generously with bits of shallot, chile pepper, cilantro and tomato, and laced with the essence of garam masala, it is a pleasant assault on the senses. After one bite, I decided that I wanted to eat my omelette's this way all the time. I wish I'd known how well eggs and garam masala go together before now!" I can't wait to try her recipe. 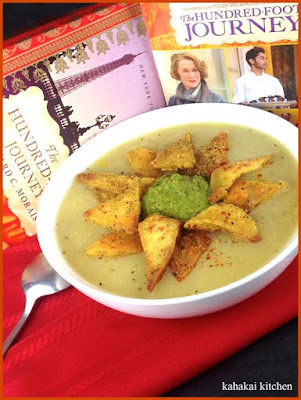 My co-hostess for this double feature also preferred the movie to the book. And about her culinary creations, she posts: "For a somewhat loosely-inspired dish, based mainly on shortening the distance between the French & Indian cuisines featured, I decided to take a French classic soup that I happen to love, Potage Parmentier (potato leek soup), using a Jacques Pépin recipe and then bring some Indian-inspired flavor to the dish by topping my soup with some curried naan bread croutons and a pleasantly-spicy pistou (or pesto) of cilantro and cashews."

I was foiled in getting sea urchin. My Enthusiastic Kitchen Elf and I wanted to re-make D's Spiced Coconut-Sea Urchin Soup that he made when we first saw this movie a year ago. But, there was no sea urchin to be had anywhere locally. So, we made a riff on that soup with another Southeast Asian inspiration: Kaffir limes. Do you know what a Kaffir lime is? It looks like a little green brain and tastes like a mix of a lime and lemongrass.

Looking Ahead
Next month, Kimberly of Coffee and Casseroles will be hosting with The Jane Austen Book Club. Keep an eye out for her invitation. I do not think I've ever seen that movie. Fun!