When I started talking about what to make for this month's Food'N'Flix which is a double feature with Cook the Books of The Hundred Foot Journey*, the Enthusiastic Kitchen Elf really wanted to re-do his Spiced Coconut Sea Urchin Soup.

You can read the invitation by Deb of Kahakai Kitchen for the Cook the Books portion. Here's her invitation; here's what D and I made for that event: our version of Sungta ani Bende Kodi.

But, in our attempt to re-do the urchin soup, we were foiled in sourcing urchin locally. I heard buzzings about an echinoderm epidemic; I also heard it was due to the oil spill in Santa Barbara earlier in the year. Whatever the cause, there have been no urchin to be had. I did think we caught a break when a local seafood purveyor was taking advanced orders for urchin. I placed my order, but kept getting emails - "not this week, maybe next week." I was holding out, hoping that we would get ours before the deadline for this post. But, it was not to be. So, D and I will make urchin soup sometime soon. Just not for this.

So, this is a riff on that soup with another Southeast Asian inspiration: Kaffir limes. Do you know what a Kaffir lime is? It looks like a little green brain and tastes like a mix of a lime and lemongrass. 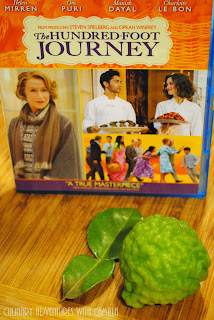 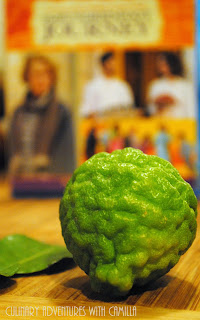 I also used Kaffir lime leaves which are oddly double leaves. I wanted to add in some cèpes, like they collected in the movie. Porcini mushrooms were the closest I could think of, but I couldn't find any fresh ones; I substituted some fresh local chanterelles. 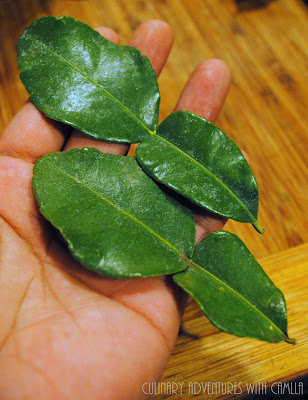 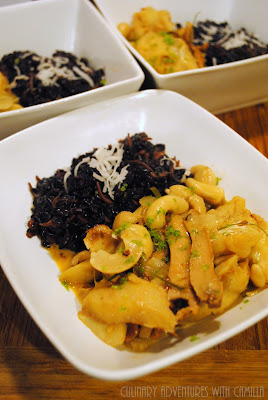 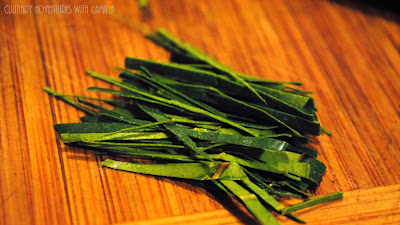 Procedure
In a large souppot, melt butter in a splash of olive oil. Soften the shallots, garlic, lemongrass, and Kaffir lime leaves in the butter-oil mixture. Add in the mushrooms and saute for a few minutes.

Pour in the clam juice, fish stock; add cashews. Season with saffron, curry powder, paprika, and turmeric. Bring to a boil, reduce heat, and cover. Simmer for 10-15 minutes. Pour in the coconut milk and bring to a simmer again. Place the cod piece in the broth. Cook until the fish is firm and opaque. Season to taste with salt and pepper. Stir in the fresh cilantro and remove from the heat.

To serve: fold shredded coconut into the steamed forbidden rice. Scoop into one side of a bowl. Spoon the cod into the other side of the bowl and add a bit of the sauce. Drizzle with a squeeze of Kaffir lime juice and a sprinkling of zest. Serve immediately. 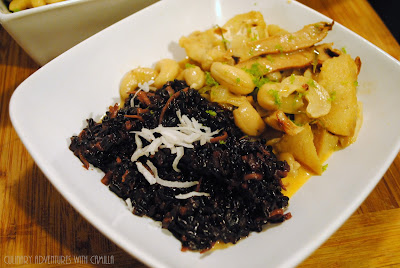