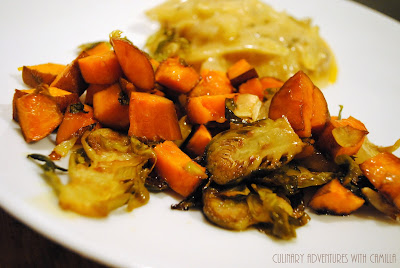 'Hash'. It's something I've seen on menus and I eaten at other people's houses. But I really had no idea what designates something as a 'hash'. Turns out, the name is derived from the French word 'hacher', to chop. So, really, it's anything that's chopped and all mixed together.

This was a super simple sidedish that was a hit with everyone at the table. And, it's detox friendly. Gotta love that.

Procedure
Preheat oven to 350 degrees F. In a large mixing bowl, toss all of the ingredients together until well-coated. Turn everything out onto a parchment-lined baking sheet. 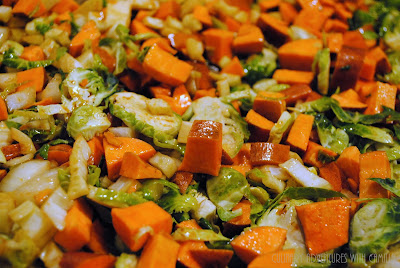 Bake, uncovered, for 50 to 55 minutes. It's done when the sweet potatoes are fork-tender and Brussels sprouts are nicely brown with some crisp edges. Serve immediately.