Another stop on the Rockridge Food Tour was La Farine — Boulangerie Patisserie. We crowded around a table and sampled their morning buns. Think buttery croissant dough rolled thin and spread with brown sugar and cinnamon, then baked in muffin pans for a portable decadent bite. Yes, it was as delicious as it sounds! And, yes, I will be trying to replicate it as soon as possible. 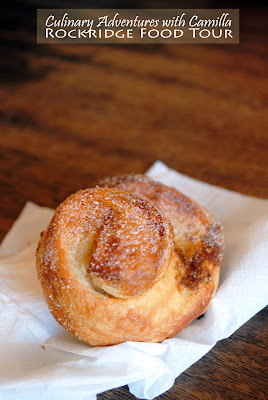 Almost as old as my husband - I'm allowed to write that because I'm older than he is! - La Farine was on an undeveloped part of College Avenue, had only a handful of employees, and served mostly people who lived in the neighborhood. Now there are three locations and nearly 100 employees. But, La Farine's roots remain. They serve high-quality French baked goods. And, in keeping with their commitment to the neighborhood, La Farine donates leftover products to area food banks and senior centers. Amazing baked goods with a generous spirit. You can't beat that.
Posted by Camilla M. Mann at 3:29 PM