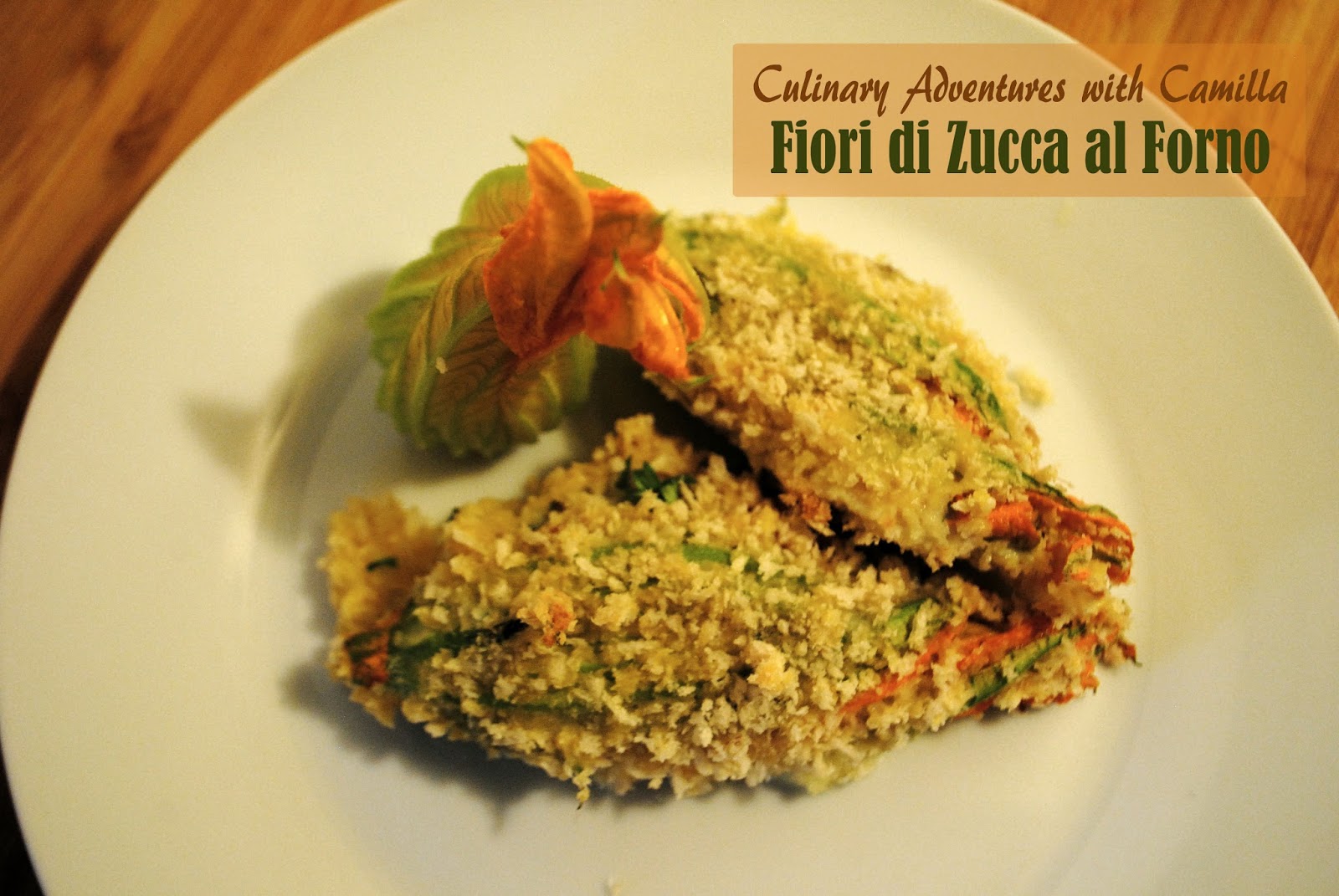 This round Debra, at Eliot's Eats, selected A Thousand Days in Venice by Marlena De Blasi for our August-September 2014 Cook the Books project. Click to see Debra's announcement post and invitation: here.


This post contains an Amazon-affiliate link at the bottom - for the book.

Setting the Scene
After my year-long contract in Rome was up, I explored more places in Italy before heading home to tell my parents that I had purposefully let my LSAT scores expire and I was not going to law school.

I spent, though not a thousand days in Venice, time enough to understand her appeal. Yes, I wrote 'her'. Venice, the Dame. La Serenissima. The most serene. There is something magical about an entire city that exists on the water.

While I do understand the draw, I vastly preferred the islands in the lagoon to the city itself. Venice lies within a lagoon that is surrounded by other islands and is separated from the Adriatic by the Lido, where Fernando the Stranger lives.

Each island has its own history and its story.  Murano is known for glass making.  Burano is noted for its delicate laces. You get the idea.

My husband was intrigued by the photographs I took during my stay in the Venetian lagoon and created these paintings. Two very different feels from two very different islands. These began as pochades (French for "rough sketch") from my photographs, then transitioned into complete works of their own.

There was a time, nearly 1,500 years ago, when Torcello was the largest and most important settlement in the Venetian Lagoon. Those days are long gone: As silt from rivers on the mainland filled up the shallow waters around Torcello, trade became more difficult and malarial mosquitoes bred. The 20,000 or so inhabitants gradually made their way to Venice, and today only a few dozen innkeepers, farmers, and other hardy souls live on the largely abandoned island. I visited at dusk one day and took a photograph that inspired the painting on the left.

Giudecca lies immediately south of the central islands of Venice.  Historically an area of large palaces with gardens, the island became an industrial area in the early twentieth century with shipyards and factories in addition to a film studio. Much of the industry went into decline after World War II, but it is now once more regarded as an exclusive residential area. It is known for its long dock and its churches, including Il Redentore. I was staying at a convent/hostel on Giudecca and walked out one morning to a glistening, golden view, painting on the right.

From the Book
What an bizarre combination of feelings I had reading while this book. First, there was nostalgia - for the country I love and consider my home away from home...and for the food. There's something simple, elegant, and distinctive about Italian food. Her descriptions of the market made me utterly homesick...

I walk to the pescheria, fish market, a clamorous hall full of the stinging, dizzying perfumes of sea salt and fish blood where every writhing, slithering, slinking, swimming, crawling, sea-breathing, jewel-eyed creature that would be hauled up from the Adriatic glitters on thick marble pallets. I look in on the macellerie, butchers, who are cutting nearly transparent steaks behind their macabre curtains of rabbits, wild and tame, hung from their hind legs, with tufts of fur left clinging at their haunches to serve as proof that they are not feline.

Second, there was indifference to the story. I do believe in love at first sight. But I can't say that her falling in love with the blueberry-eyed stranger was convincing or compelling. I never felt that she conveyed an overwhelming passion that would cause someone to, first, bring a stranger home - from another country - less than a month after meeting and, second, uproot and follow that stranger to a foreign land for good. While her actions were of a woman consumed, for certain, her words, about Fernando, were tepid, not scorched.

We exchange number and business cards and addresses, having no more powerful amulets. ...He asked when I'll be returning home, and I tell him.

I definitely didn't adore this book. Still it had its moments of delight. And, as I said, for the descriptions of the food and markets, I would recommend it. 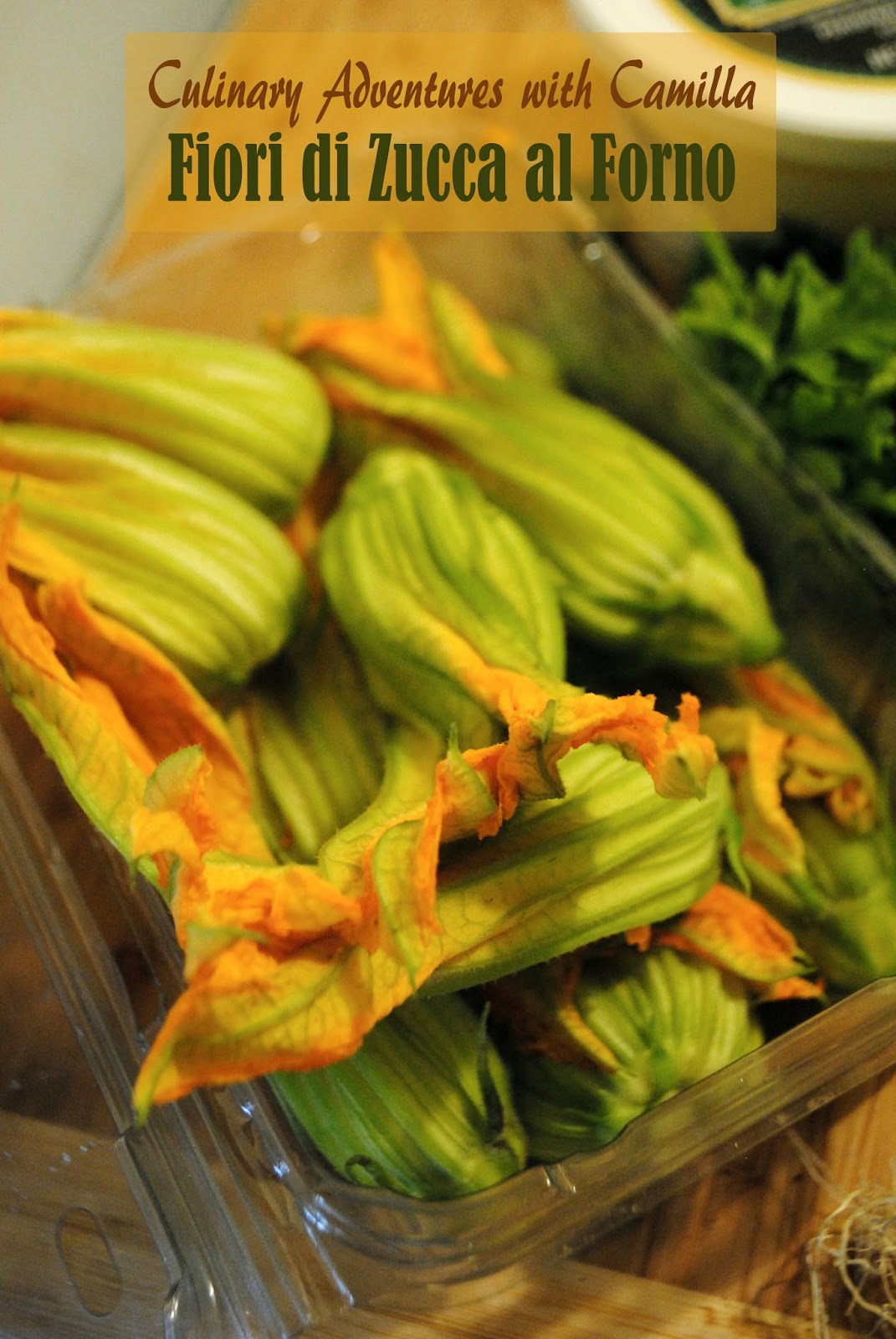 On Our Plates
I knew that I had to make something with seafood. Some of my favorite memories of Venice are of the lively fish market on the Rialto Bridge: il mercato del pesce. It's chaotic and fishy, but it's a sight you'll never forget. I considered making Baccalà Mantecato (dried cod mousse). I thought about getting some fresh sardines - because those are important to this area's history - and making probably one of the most typical Venetian dishes: Sarde in Saòr. You will find it in any restaurant or osteria in the lagoon.

But, when I was at the farmers' market and found squash blossoms, my mind was changed. One of the pleasures of summer in Italy is being able to eat fried stuffed zucchini flowers—the cheese and anchovies ooze out of the thin, crisp fiori. I decided to try a baked version. 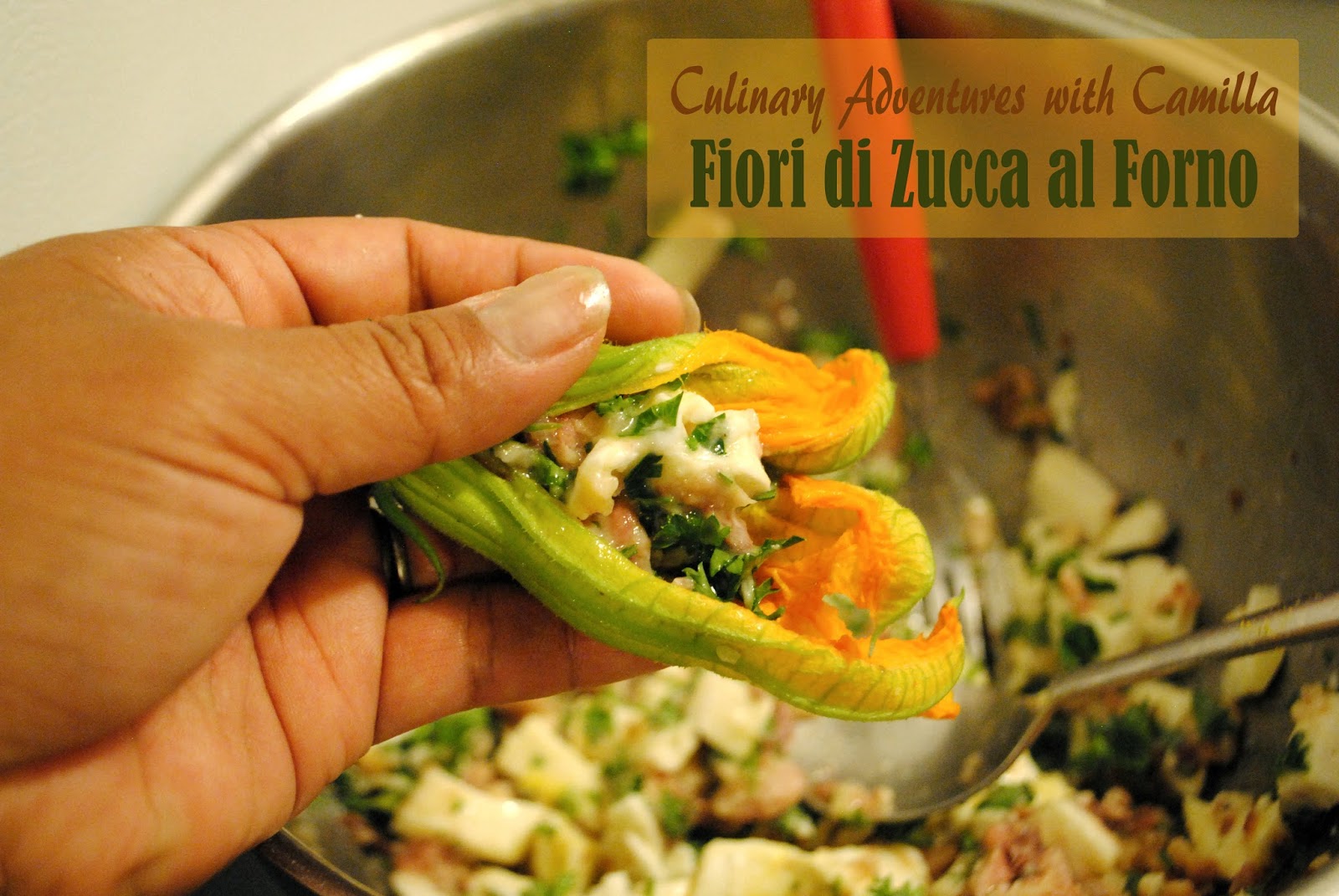 Procedure
Preheat the oven to 400 degrees F. Mix together mozzarella, anchovies, and parsley. Season with freshly ground pepper. Place 2 eggs in a bowl and whisk. Put the breadcrumbs in another bowl. 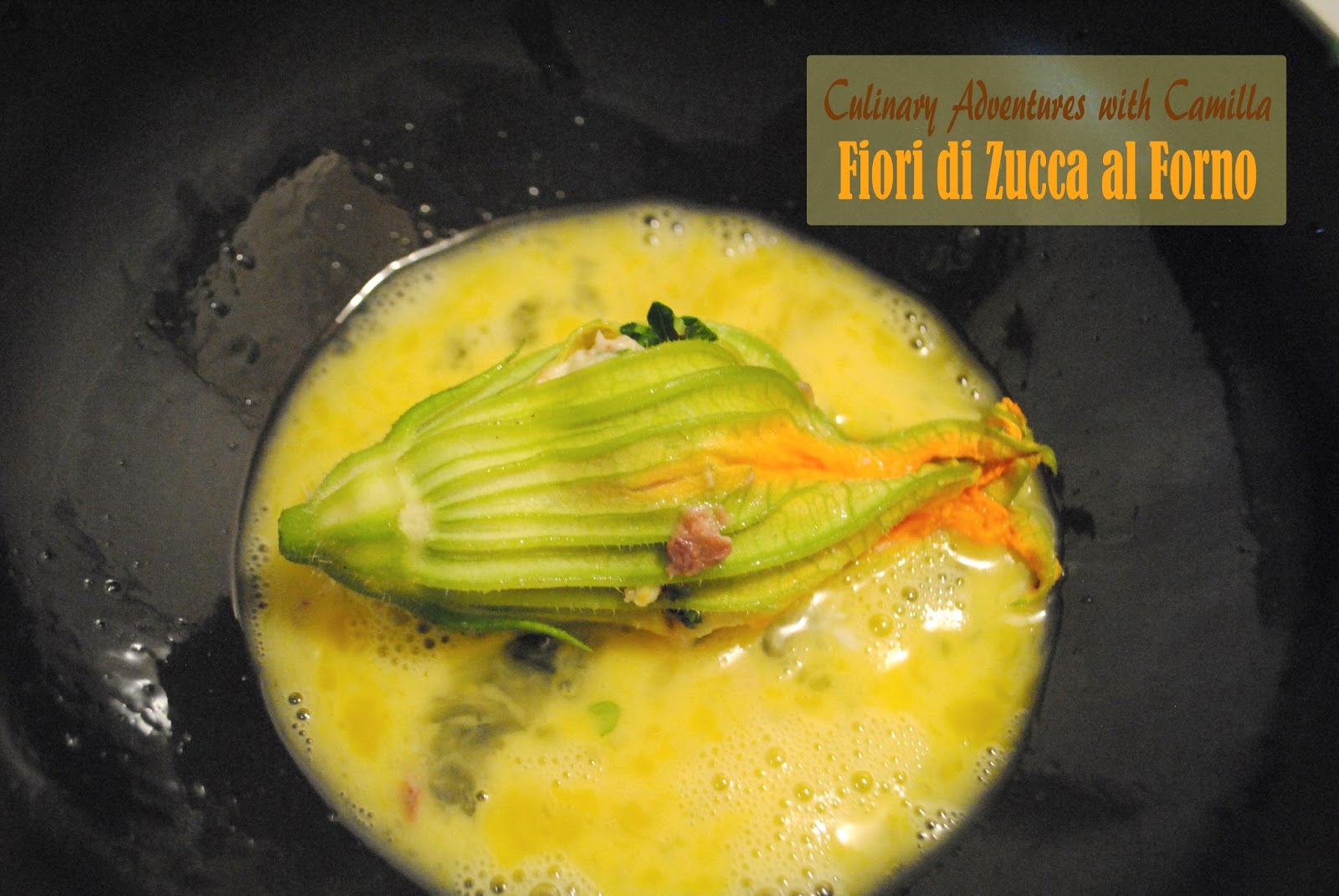 Dip each stuffed squash blossom in egg, then breadcrumbs. 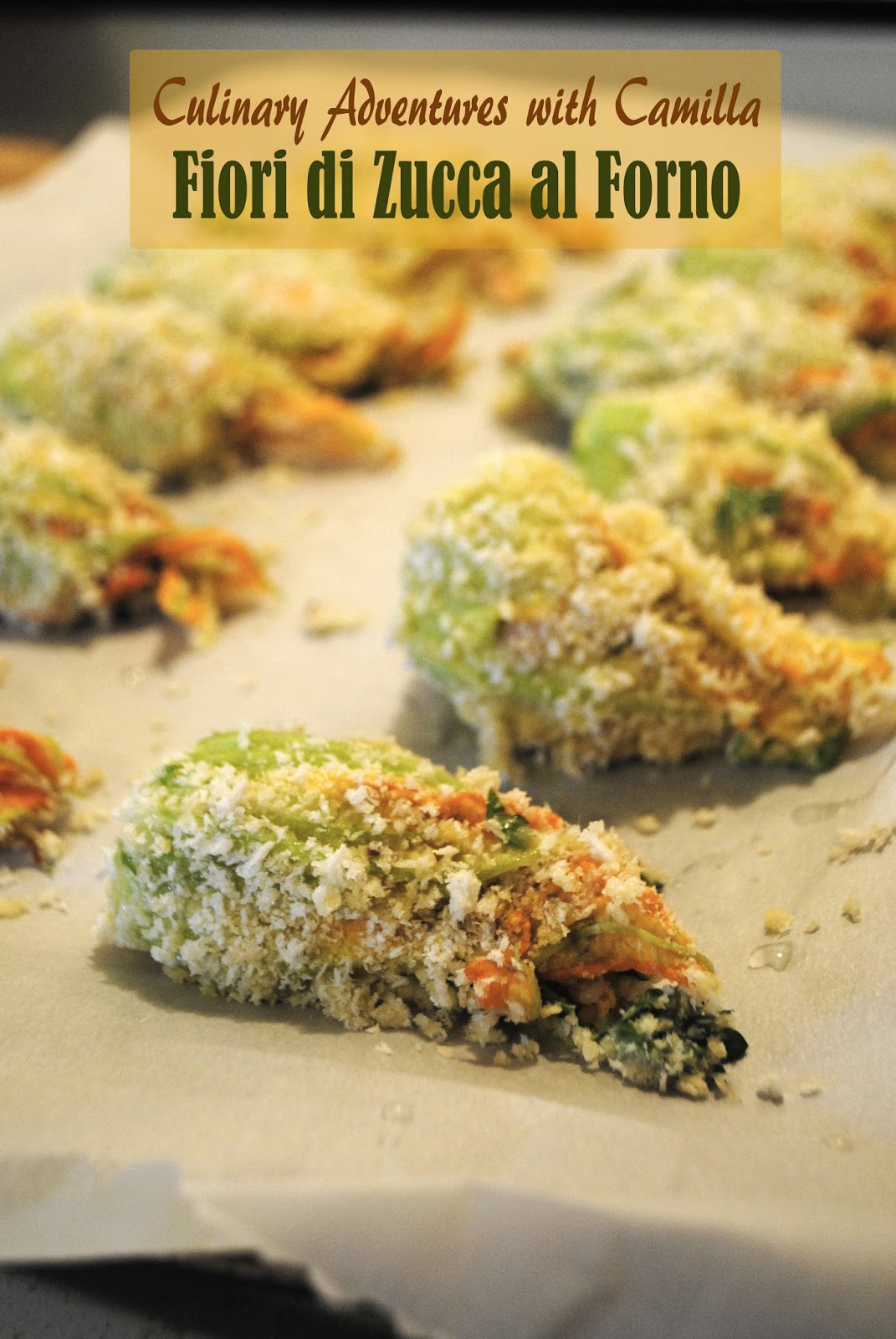 Lay them on a parchment-lined baking sheet. 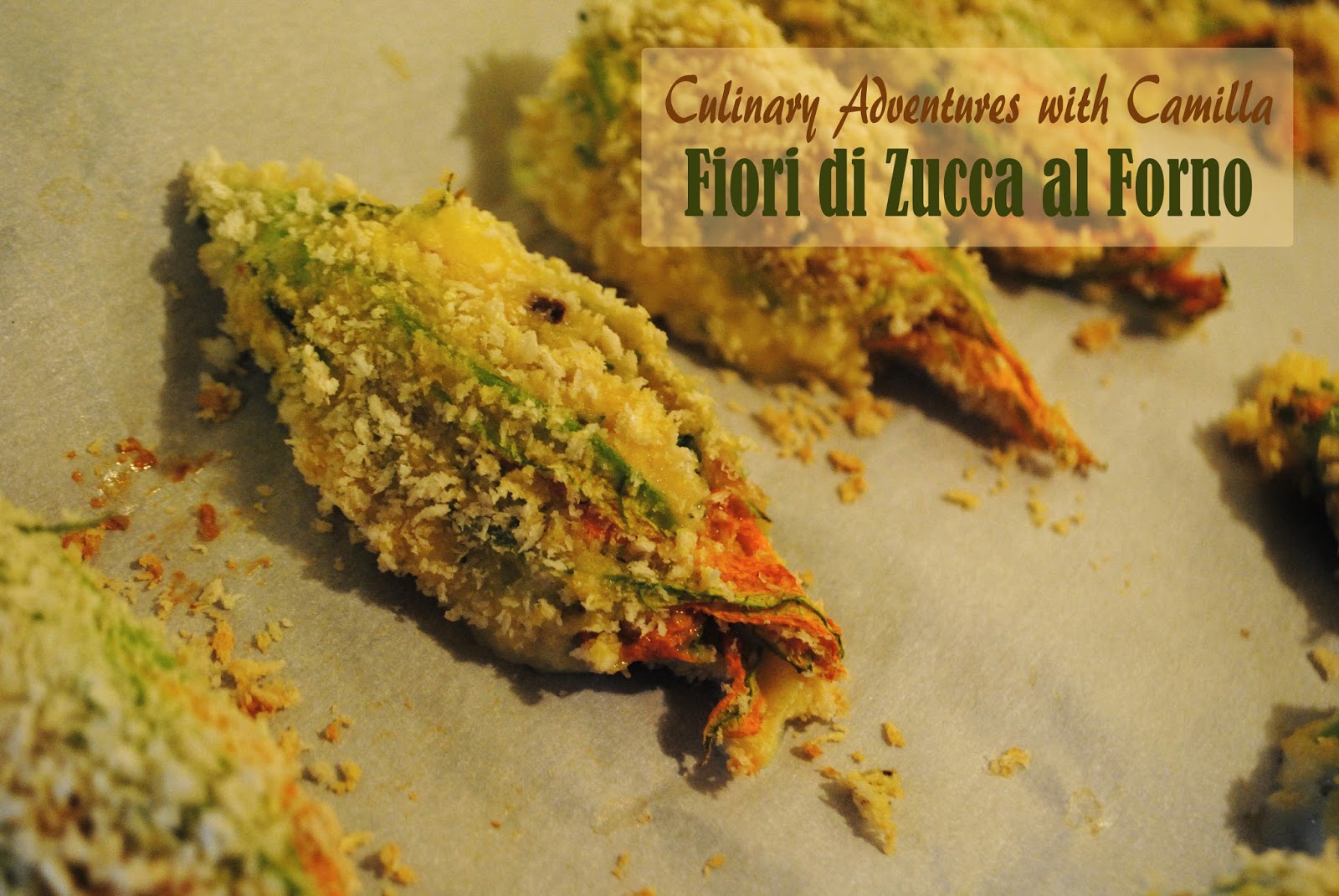 Bake for 10 minutes, until lightly browned and crispy. Remove from the oven. Allow to cool for a few minutes before serving.

If you want to join the fun, posts aren't due till the end of September. It's a breezy summer read and I'd love to see what you think. Are you enchanted by Venice?