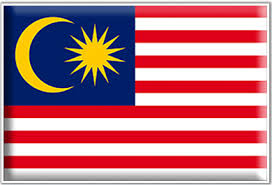 On Friday we went by tabletop to Malaysia. This is actually a dish we've had at our favorite Indonesian restaurant in San Francisco. But, until today, I've never tried to make it. It's incredibly simple. We'll definitely be making this again!

Here are some fun facts about Malaysia, a country that is split between peninsular Malaysia and east Malaysia with the South China Sea dividing them.

Beef rendang is of Indonesian origin, from the Minangkabau ethnic group of Indonesia and is often served at ceremonial occasions and to special guests. But beware, beef rendang is not your everyday beef dish that you can whip up in a jiffy; I actually made this the night before and just heated it up for serving. I think that letting it sit overnight actually helped develop the flavors.

No beef rendang is made exactly the same, so I don't feel too badly about taking some culinary liberties with the dish. 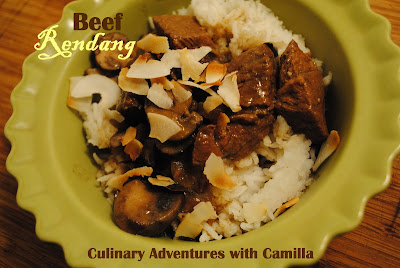 Heat the oil in a soup pot, add the shallots, garlic, and ginger and stir-fry them until aromatic. Add the beef and the pounded lemongrass and stir for 1 minute until the beef is lightly browned on all sides. Pour in the coconut milk, tamarind juice, water, other spices - cinnamon, cloves, star anise, and cardamom pods. Bring to a boil, cover, and reduce heat. Simmer for 1 1/2 hours, until the meat is tender. Add in the honey, salt, pepper, and mushrooms. Cook for another 30 minutes until the sauce has begun to thicken. Serve  with steamed rice, topped with kerisik. 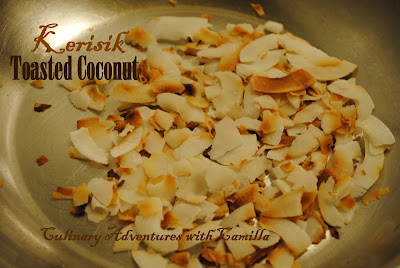 *To prepare the kerisik or toasted coconut, just add the coconut to a dry pan, stirring continuously until they turn golden brown.

These Global Table Ambassadors are signing off now. We'll be heading to the Maldives next. Stay tuned.