Cooking Around the World: Maldives

We traveled, via tabletop, to the Maldives for dinner tonight in our Cooking Around the World Adventures. The Maldives, locally called Dhivehi Raajjeyge Jumhooriyyaa, is comprised of twenty-six major atolls and over one thousand coral islands in the Indian Ocean. It's the smallest Asian country in regards to population and is also the smallest Muslim nation in the world.


Tourism and fisheries are the two major industries supporting the Maldivian economy. And it is highly regarded in the SCUBA diving world for its pristine reefs and shark species. It's definitely on my short list of places to visit with my regulator and BCD!

Maldivian cuisine is based on three main components: fish (mainly tuna), coconut, and rice. It is also heavy-reliant on seafood, vegetables and, naturally, spices due to its proximity with India and Sri Lanka. I planned our dinner to include all three of those ingredients... 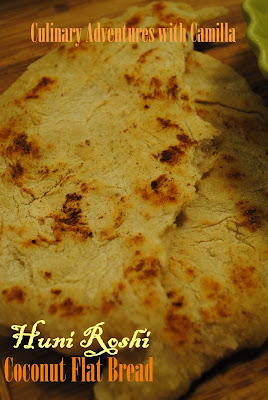 Knead flour, grated coconut, coconut oil, and water to a soft dough. Divide the dough into 6-7 balls and roll out with a rolling pin on a flour-dusted surface to 1/4" thick circles. Cook the rolled out roshi in a medium skillet until slightly golden. 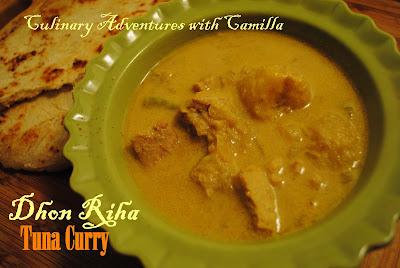 In a large flat-bottom pot, saute the garlic and shallots in 1 T of coconut oil until they begin to soften. Add the spices and the coconut cream, coconut milk, and water. When the coconut liquid begins to boil, add tuna, chunks of banana and melon; traditionally, they use mangoes, but I couldn't find any fresh mangoes at the market today. Cook on low heat until the tuna is cooked firm. Season with freshly ground salt and pepper. Add a dash of paprika. Serve hot with huni roshi.

This dinner was delicious though the tall Manns definitely liked the roshi better than the small Manns did. Riley objected to the "crunchiness" of the grated coconut. That meant more for me and Jake. Sweet.

These Global Table Ambassadors are signing off for now. We're off to Mali next.