Snakebites to Eat and Drink {Pass the Cookbook} 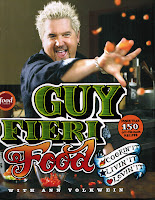 Last month the Pass the Cookbook series kicked off under the leadership of Kita, the culinary force behind the Pass the Sushi blog. We had the option of cooking one of three recipes from The Pioneer Woman Cooks by Ree Drummond; I opted to make her her pots de creme.

This month, Kita selected three recipes from Guy Fieri. Though I have never seen his show and don't own his cookbook, I decided to expand my culinary horizons and join the fun. These are from Guy Fieri's Food: Cookin' It, Livin' It, Lovin' It.  Our options were: Asian-fried Quinoa (click for recipe on his website), Cherry Cobbler Pizza (click for recipe on his website), and the Snake Bite. I decided to make the last one on the list - though I made a few changes. I swapped wine for beer, dumped the onions - because I never mix garlic and onions! -, and used fresh herbs instead of dried.

Apologies in advance. I made this while we were on vacation last week and I must have dumped the photos off my SD card before I got it downloaded. Ugh. Sorry!

In a large skillet over medium-high heat, cook the bacon until just crisp. Remove from pan and set aside. In the same pan, over medium-high heat, melt 1 T butter, add the garlic, and cook 2-3 minutes, until just starting to brown. Add ¼ C of the beer and deglaze pan. Add the tomatoes, Worcestershire sauce, and the chicken stock. Simmer the sauce for 20 minutes, stirring occasionally, until thickened.

In a large bowl, combine the herbs and spices. Add the shrimp and toss to coat in the mixture. In a separate skillet over medium heat, heat the oil and 2 T of butter. Add the shrimp, reserving and extra spice mix and cook for about 90 seconds per side, or until a bit pink. (they will not be fully cooked). Transfer to a plate.

Meanwhile, spread the rolls with garlic butter and toast them.

Add the shrimp to the tomato sauce and stir in the reduced cream, cilantro, and basil. Simmer for 3 to 4 minutes, to finish cooking the shrimp. Stir in the remaining 1 T butter. Garnish with reserved green onions, piling a generous portion of shrimp and sauce on the bottom of each of the rolls, topping with the buns. Serve immediately.

And, just for kicks, I poured some Snakebite drinks for me and Jake...

Add the shot of syrup to the bottom of a pint glass, then add the lager and the cider. To finish it off with style drizzle an S into the head with some more of the rhubarb. A drink for the sweet tooth, goes down more easily than either cider or lager and is incredibly refreshing.