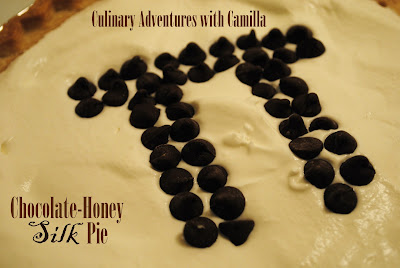 Since last year's Chocolate Silk Pie was such a hit, I decided to make v.2. 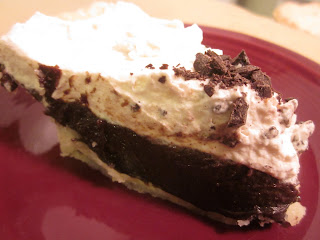 In a large mixing bowl, cream the butter at medium to high speed for about a minute. Add sugar and honey; beat until light and fluffy. It must be mixed long enough so it is no longer gritty.

Slowly add the melted chocolate to the butter mixture, beating on low to medium speed until the chocolate is well-blended and mixture is smooth and creamy.

On medium speed, add the egg yolks one at a time, beating after each one before adding the next egg. In another mixing bowl, beat the egg whites until they form soft peaks. Gently fold the egg whites into the chocolate mixture. Spread into baked pie crust. Let cool. Top with unsweetened whipped cream and, if you like, make a pi symbol with chocolate chips.