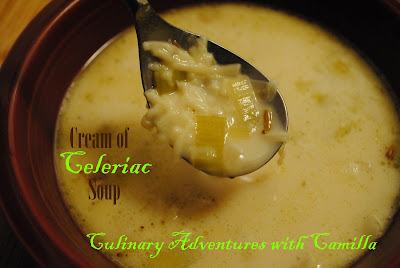 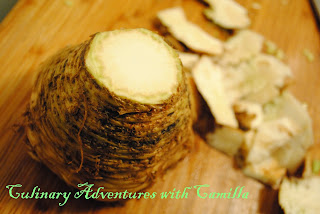 I had a handful of these "not lovely" knobs in my High Ground Organics CSA box this afternoon: celeriac or celery root. What they lack in aesthetics, they make up for in subtle, gorgeous flavor. I would say that they taste like celery mixed with parsley.


Procedure
In a large soup pot, melt the butter in a splash of olive oil. Saute the leeks and celeriac until caramelized and softened. Add the celery seeds and chicken broth. Bring to a boil. Then cover and reduce heat to a simmer. Cook for an hour or so. Just before serving, stir in the cream. Garnish with the cheese and serve hot.