By Camilla M. Mann March 08, 2013
Bleus, beautiful bleus...we tried a handful of different bleus before picking a favorite. Bleus are created by introducing a mold from the genus Penicillium - either Penicillium Roqueforti or Penicillium Glaucum during the cheesemaking process and an additional step in the aging process called “needling" that gives the bleus that distinctive veining. 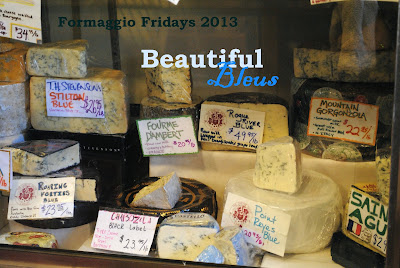 Point Reyes Blue: This was sweet with a strong punch of bleu.

Rogue River Blue:  Rogue River blue cheese is wrapped in grape leaves that have been macerated in pear brandy. Yes, it is as divine as it sounds. I loved the creaminess that was dotted with some crunch though I'm still not sure what that was - exactly. It reminded me of the forest with hints of evergreen, sweet berry notes, and some musty nuttiness.

Cambozola: This German cheese combines the richness of Camenbert with the sharpness of Gorgonzola.  It's one of the mildest blue cheeses and just about won my boys' hearts.

Castello: From Denmark. That already makes it a winner with my boys - their Zia Rikke is in Denmark...Ms. Ulla is from Denmark. I've heard it called "the gateway blue," a bleu cheese for people who think they don't like bleu cheese. It's reminiscent of cream cheese with a little salty tang. And it was definitely the winning bleu for my caseophiles-in-training.


Slice of pear + a slab of bleu = Formaggio Friday bliss