By Camilla M. Mann August 01, 2012
When I realized that I forgot to pick up bread for Riley's Nutella Bread Pudding tonight, I decided to whip up a quick Mark Bittman-inspired bread (from his How to Cook Everything) instead of going back out to the grocery story. I don't know why I don't make this bread more often. His recipe uses a food processor. Even without that, this is easy, mostly hand-off, and done in less than 90 minutes. 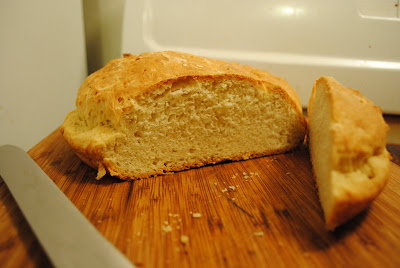 Shape the dough into a flat round, adding only enough flour to allow you to handle the dough. Cover it and let it rise in the warmest place in your kitchen while you preheat the oven to 425 degrees. Let it rise as long as you can. Brush the loaf with water, sprinkle it with coarse salt and herbs if you like, and bake for 15 minutes. I usually bake it in a baking stone - whatever shape catches my fancy. I baked this one in a deep pie dish. Lower the heat to 350 degrees and continue baking until done–the crust will be golden and crisp–about 30 to 45 minutes more.

Perfect...and ready for Riley to whip up the dessert he planned to make.