Cooking Around the World: The Gambia

By Camilla M. Mann August 14, 2012
The Republic of Gambia is the smallest country on the African mainland and is bordered on three sides by Sénégal. A wide variety of ethnic groups live in The Gambia and its cuisine is a mixture of Native, Arabic, Portugese and British influences. 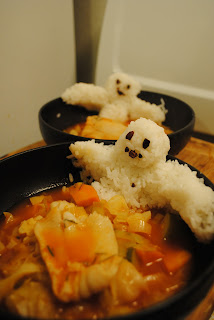 For our tabletop travel to The Gambia, we cooked a traditional Gambian one-pot stew of fish and vegetables in a tomato broth. And since it's usually served with rice, I used the opportunity to makes these cute lil' rice dudes my cousin had sent me a photo of with a note that read: "thought of you when I saw this." Adorable.
The funny thing: I made two rice dudes - one of each of my kids - and my husband wanted to know where his was. Oh, brother!
Serekunda Fish Benachin
Benachin literally means 'one-pot.' So, all of this went into one pot and simmered until cooked and soft. Then I laid the fish on top and steamed them until they were opaque. One recipe I found listed measurements in "cigarette cups;" I have no idea what that means! 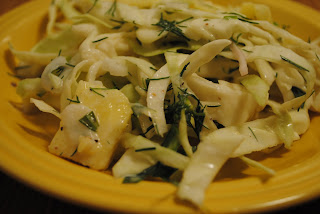 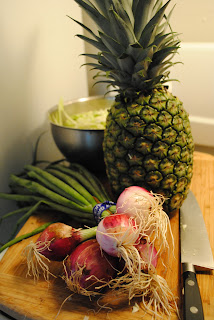 I served the soup with a

traditional Gambian recipe for a salad of cabbage, celery, spring onions, and pineapple with herbs in a yogurt, sour cream and coconut milk dressing.

I didn't really measure anything for this meal...just eye-balled it and it turned out great!

We are off the Georgia next in our Cooking Around the World Adventure!