As much as I love the immediacy of email, I love getting mail. And I especially love getting packages! When Lindsay first contacted me, she wrote that "Cincinnati itself is a pretty exciting town to live in...and there are a lot of great local products I am hoping to send you." She was successful.

To see what the other foodie penpals got in their goodie boxes, click here. 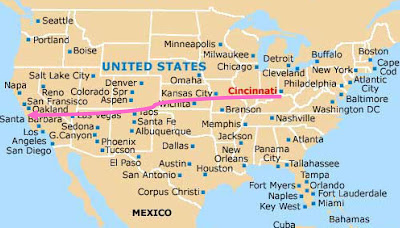 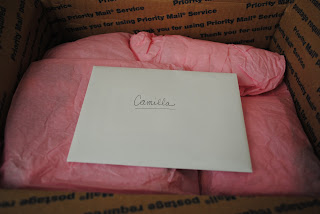 I received my box on an otherwise gloomy day on the central coast of California. Her package made everyone in the family giddy with anticipation. But I, lone female resident, trumped them all: "The tissue paper is pink. What does that mean? It means that this is for Mommy! But I promise that I'll share."

The first thing in the box was a note and a recipe for baked oatmeal. I have never had baked oatmeal. We love oatmeal - rolled oats, steel cut oats. It's the perfect breakfast for an autumn morning. So, I will definitely give that a try this year. 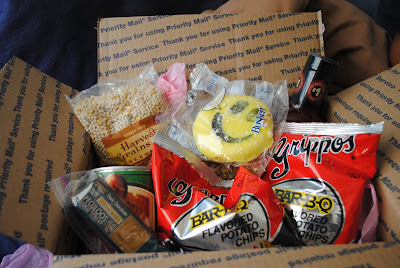 Lindsay included two bags of Grippos chips because "one is not enough!" The Cincinnati connection: When Angelo Grippo founded Grippo's Cone Company, in 1919, he manufactured rolled sugar cones in a one-room office on Court Street. Grippo's added pretzels to their business and in 1923 began hand twisting and baking the traditional twist pretzel. The standard sized pretzel sold for a penny each at retail locations throughout Greater Cincinnati.


Next there was a can of pizza sauce from LaRosa's Pizzeria. In 1954, when Buddy LaRosa opened his first neighborhood pizzeria on Cincinnati's West Side, his Sicilian-born father told him he was crazy. "You gonna sell pizza? ‘Med-i-gans never gonna buy pizza from you," he said. Many Americans had never even heard of pizza at that time. But now LaRosa's Pizzerias serve dozens of neighborhoods throughout Cincinnati, Dayton, Northern Kentucky and Southeast Indiana. 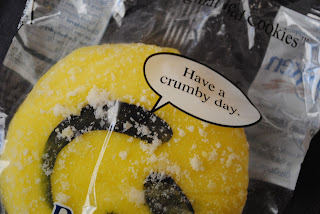 My two boys were literally vibrating with excitement when they saw a duo of iced cookies from Busken Bakery that has been serving up pastries to Cincinnati, Ohio since 1928. Two sunny cookies iced with gigantic icing grins. "Have a crumby day!" the package reads. Riley, my 10-year-old, loved the play on words; Dylan, my 8-year-old, didn't get it and said, "Mommy, that's not a nice thing to say to someone!" But they both smiled, matching the cookies' grins, as they munched and crumbled all over the table.

My grill-master husband was thrilled with the bottle of Montgomery Inn barbeque sauce. The Montgomery Inn began in late 1951, when Matula and Ted Gregory moved in and renamed the former McCabe’s Inn. One night, Matula cooked barbecued ribs with her now-famous barbecue sauce; everyone who tried them loved them. Soon they were on the menu and the Gregorys were running a bona fide barbeque restaurant. When a local restaurant critic dubbed Ted the “Ribs King,” history was written.

Then there were two of Lindsay's favorites from Trader Joe's - a bag of harvest grains and chocolate bar filled with speculoos icing - and a bag of homemade granola.

Lindsay, thank you so much! All of the Cincinnati-based products were so much fun and I loved learning about the companies' histories. And your granola didn't last for 24 hours in my house. We were snacking on it by the handful until it was all gone. I appreciate all your efforts and hope that your Foodie PenPals box was as fantastic as mine was. My entire family enjoyed it.

And because the gal to whom I sent a package this month isn't a blogger, I thought I'd share a quick note from her: "Thank you so much for all the wonderful treats and items in the box! The ear rings are beautiful! The ginger chili sauce is a huge hit, even my super picky boyfriend loves it! I can tell you really put a lot of thought and time into putting together the box, from the wrapping paper to the neat little info cards, it felt like it was my birthday! I hope you enjoyed the box you received as much as i have enjoyed yours. Have a lovely day!"