This being my first month of participating in the Secret Recipe Club, I hope I'm doing everything correctly. What's the Secret Recipe Club, you ask? It's a group organized by Amanda of Amanda's Cookin'. Each month, every participant is assigned to someone else's blog from which they pick a recipe - or two - to make and post, but it's all a secret until the big day. Today's the day. I always love a kitchen challenge and some culinary adventure, but I'm a little bit nervous here.

I was assigned the Meet the Swans blog and immediately got to work perusing the "Kitchen with Krista" section.

So many treats, so little time. From her Easy and Elegant - Double Chocolate Ice Cream Waffle CupCakes to her Pumpkin Pie Snickerdoodle Bars, everything looked delectable.

But being the savory gal that I am, I decided to try my hand at her Beer Bread. I loved the simplicity: three ingredients, or four if you don't have self-rising flour. 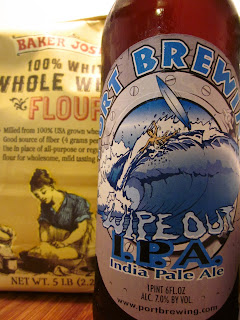 Beer Breads
I had initially thought to do a six-pack's worth of breads, but life got busy as it always does. Still I managed to bake two versions of this bread and it was a hit both times.

The first time I tried Krista's beer bread, the only bottle in my fridge was a Wipeout IPA. So I decided on a Wipeout IPA Whole Wheat Bread. It was deliciously simple.


In a large bowl mix the dry ingredients. Slowly pour in the beer. Stir to mix. Batter will be very sticky. Pour batter into a buttered loaf pan. Bake in a preheated 350 degree oven for one hour. 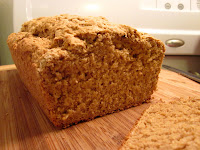 The verdict: success!
We were all amazed at how much flavor from the beer was retained in the bread. The dense bread was crisp on the outside, soft on the inside, and had the distinctive bitter but intensely floral hop aroma of an IPA. 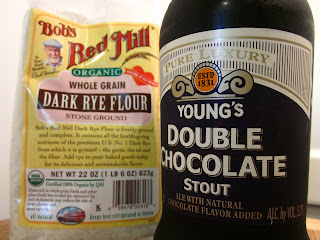 In a large bowl mix the dry ingredients. Slowly pour in the beer. Stir to mix. Batter will be very sticky. Pour batter into a buttered loaf pan. Bake in a preheated 350 degree oven for one hour.
Another success. This loaf had the bite of the rye but the sweetness of chocolate and it paired nicely with my slightly tart ratatouille with quince.
Quince Butter
Another of Krista's recipes that caught my eye was her Homemade Apple Butter. As I don't have a crockpot, I looked at a few more apple butter recipes that helped me change proportions for a stovetop version of a fruit butter. I incorporated numerous adjustments based on how I was cooking this and on what I had in my cupboards: first, I didn't have any apples, but I did have some quince from a friend's garden; second, I added liquids; third, I substituted spices to match what I had on-hand.

I suppose it would be more fair to say that Krista's apple butter recipe inspired me to try my hand at making a fruit butter which I have never done. Her recipe was a great launching point and I will certainly be making this again. Maybe next time I'll use apples! 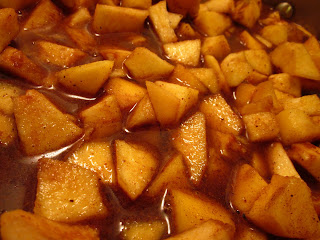 Put quince pieces into wide thick-bottomed pot, add all ingredients, cover, bring to a boil, reduce heat to simmer, cook until pieces are soft, about 20 minutes. Remove cover and cook uncovered, stirring constantly to prevent burning and encourage evaporation. Scrape the bottom of the pot while you stir to make sure a crust is not forming at the bottom. Cook until thick and smooth, about one hour. 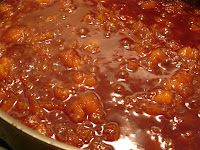 Spoon the butter into sterilized jars, leaving about a 1/2" gap to the top. Gently tap the bottom of each jar on the counter to release any air bubbles. Using a damp clean towel, wipe the rims of the jars and secure the lids and rings. Process in a water bath for 10-15 minutes. Remove the containers with tongs and let cool on the counter. You’ll hear the sound of can tops popping shortly—a sign that a secure seal has been made. Pop, pop, pop. Or, you can refrigerate the jar without processing and use it within three weeks. Enjoy!
Thanks so much, Krista, for the culinary inspirations. I am so glad to have met the Swans. I'll be stopping back by to make some of your pumpkin-y treats later this month.
xoxox,
Camilla
Culinary Adventures with Camilla