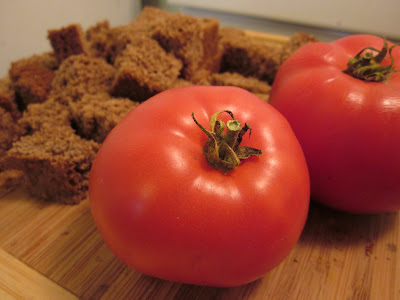 Wanting a magical mouthful that showcased the sweet tomatoes from Belle's garden, I decided to whip up a Tuscan salad that features fresh tomatoes and day-old bread: panzanella. There are probably as many versions of panzanella as there are Italian cooks; because the recipe is so simple, the secret to a tasty panzanella is fresh, flavorful ingredients...whatever you put in it. 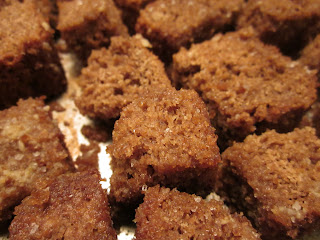 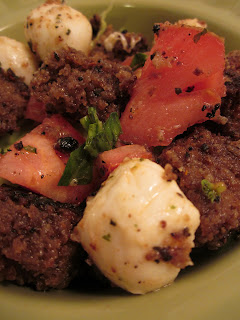 In a large flat bottom pan, lightly brown the garlic in a splash of olive oil. Add the cubed bread and stir the bread continuously so that it doesn't burn. Cook till the bread is toasted but not crouton-hard.
In the meantime, place the tomatoes and mozzarella in a large mixing bowl. Once the bread is done, add it to the bowl. Season with sea salt. Splash with olive oil and balsamic vinegar. Gently stir in fresh herbs. Serve over a bed of lettuce.
Panzanella variations: cucumbers, bell pepers, anchovies, onions. Be creative!