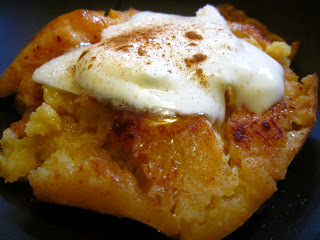 The boys love baked apples on chilly Autumn days. I love the simplicity of its preparation. So on this chilly Summer - did Mother Nature miss the memo that it's still Summer? - morning, I swapped quince for apples and served baked quince for breakfast. So easy. And while they cooked, I sat on the floor with my boys and played Earth-o-poly. Perfect, lazy Sunday morning.

I washed the quince, sliced them in half and cored them. Placing them in a baking dish with a small pat of butter and a dusting of cinnamon and sugar, I covered them in foil and baked them at 350 degrees for 45 minutes.

In Turkey, baked quince are served with a heavy clotted cream called kaymak. I served them with a spoonful of organic plain yogurt and a dash more of cinnamon. It is still on the tart side, so you might want to sprinkle some more sugar on the quince or drizzle honey over the yogurt if you like things a little sweeter.

This would also make a delicious dessert.