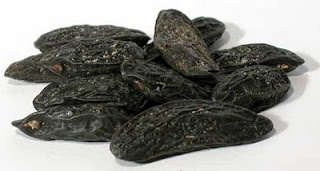 Clicking around Monterey Bay Spice Company's website - to use my groupon - I wanted to purchase things that were unusual and new to me.

Tonka beans fit the bill perfectly. Described as having an aroma that is a mixture of vanilla, cloves, cinnamon, and tobacco, I thought them a perfect addition to my culinary adventures, especially since I'd never heard of them before.

And while searching for recipes that utilitze the beans, I realized that - sold as a food item - tonka beans are illegal in this country.

How is that possible? They were just delivered to my doorstep! Then I discovered that tonka beans are commonly used and sold for love spells and other witchcraft rituals. That made them all the more intriguing. Thank goodness for witches!

A quick note about the ban, as gleaned from several websites, including Ike DeLorenzo's article "The Tonka Bean: An Ingredient So Good It Has to Be Illegal"...

In this country, all foods that contain the chemical compound coumarin are considered by the FDA to be 'adulterated' and have technically been illegal since 1954. Tonka beans are a major source of coumarin; however, at least 30 entire tonka beans (or 1 gram of coumarin total) would need to be eaten to approach levels reported as toxic. It's interesting to note that coumarin also occurs naturally in cinnamon, lavender, licorice, and a host of other commonly eaten plants—all of which would seem to be illegal under the regulation.

So tonka beans are no more toxic than any other spice that contains coumarin however the FDA is enforcing this old law in regards to tonka beans. Has anyone been busted for tonka bean possession? You bet. In the middle of this past decade, federal regulators got busy tracking down chefs using the tonka bean. Chef Grant Achatz, from Alinea in Chicago, described the warning call from his supplier: "They said, 'Don't be surprised if the FDA shows up soon.' Two days later, they walked in: 'Can we look at your spice cabinet?'"

Wow. I guess I'd better use all my beans as quickly as I can. Or...just claim I'm a witch. That works for me.