Still that doesn't stop me from making whatever breakfast the boys want on testing morning. So, as today was the first morning of Riley's STAR tests, I asked him what he wanted for breakfast; his answer: crêpes. 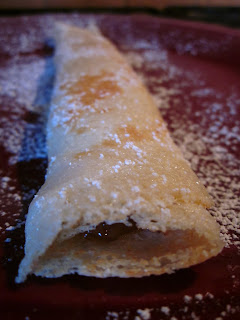 Fine.
"Mom, do you know why I asked for crêpes?"
Because you like them.
"Well, yes, I do like them. But it's because your pancakes aren't very good."
Maybe we should work on the balance between candor and tact.
1 C white whole wheat flour
3 eggs
2 C milk


Whisk everything together to form a thin batter. Heat and butter a griddle or frying pan over medium heat. Pour the batter onto the pan. Tip and rotate pan to spread batter as thinly as possible. Brown on both sides and serve hot. This recipe makes between 8-10 crêpes. Once the crêpe is cooked, I smear it lightly with whatever jam I have on hand, roll it up, and dust it with powered sugar.

This morning the fillings of the day, for the boys, were: Trader Joe's mango butter and Bonne Maman's fig preserves. Since I'm more of a savory gal, mine had wilted spinach, caramelized onions, and feta cheese.