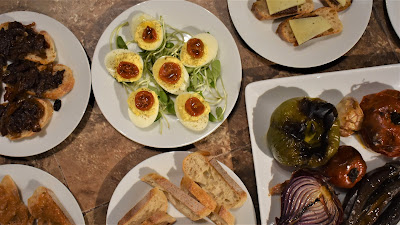 Martin of ENOFYLZ Wine Blog is hosting this month's World Wine Travel group. He has the group exploring Andalucía; you can read his invitation here.

If you are reading this early enough, feel free to join in our Twitter chat on Saturday, October 23rd at 8am Pacific. Follow the hashtag #WorldWineTravel and be sure to add that to anything you tweet so we can see it.
Andalucía 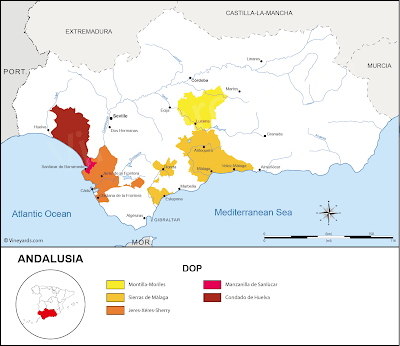 Andalusia,  Andalucía in Spanish, is the southnermost wine region in the country and home to  renowned fortified wine, Sherry. It is south of Extremadura and Castilla-La Mancha, west of Murcia, and east of Portugal. 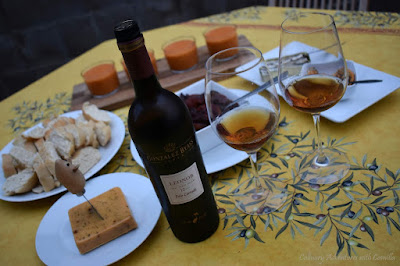 Back in 2018 I did a Sherry tasting and shared Gazpacho, Spanish Small Bites, + Sherry Tasting. I considered doing a deeper dive into Sherry for this event, but was excited to locate a bottle of 2017 Sierras de Málaga Laderas de Sedella Anfora. 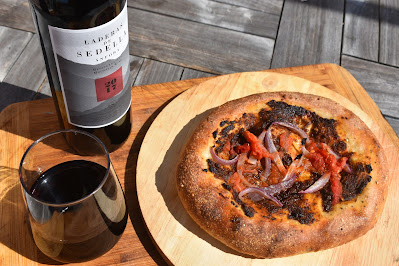 Before I get to my main pairings, I opened up the bottle and did a sneak peek with a simple Catalan coca. Find the recipe for coques here. 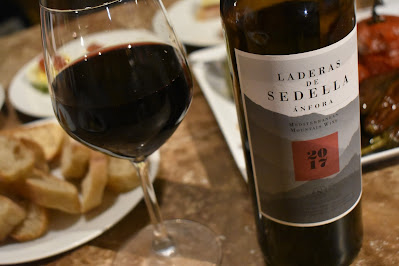 This bottle comes from the Sierras de Málaga DO. Founded in 2006, Sedella is owned and operated by Lauren Rosillo, an innovative Spanish winemaker who worked in Rioja, Rueda, and La Mancha before he fell in love with the Axarquia region in Málaga. Winemaking in the region dates back to 600 BC when the Greeks planted vines in the area.
Rosillo blended this wine from three Spanish grapes: Romé Tinto, Garnacha, and Jaén. The wine was fermented with wild yeasts in French oak before being aged for a year in cement amphorae. It pours an inky purple. Aromas abound with bright red fruit with layers of spice. There was a tinge of violets on the finish.
Tapas on Toast: Spanish Montaditos 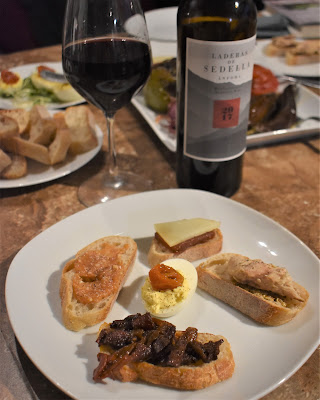 To go with the wine, I decided to serve my version of Spanish montaditos. A montadito is a small, open-face sandwich served as a tapas dish. The name comes from the Spanish verb montar, 'to mount,' because the toppings are piled on top of the bread.
I topped one with manchego and quince paste. Another offering was Chorizo Simmered in Red Wine. 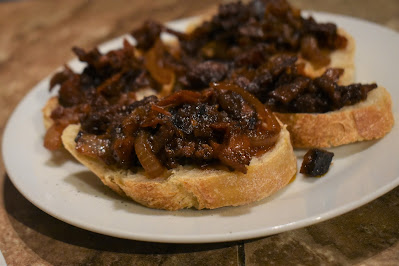 I made Catalan Escalivada and pureed it into a savory paste as a bread topping. 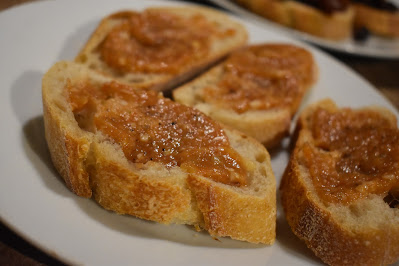 And I flaked Spanish sardines over an olive puree for another montadito. 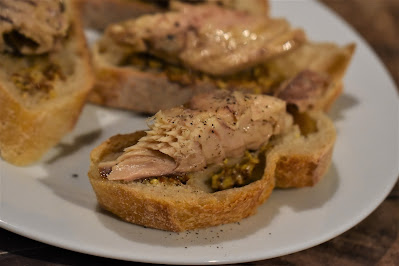 This was a fun dinner of Spanish finger foods with a beautiful wine. That's a wrap for my Andalusian exploration. Stay tuned for next month's discussion of the wines of Castilla-La Mancha.