By Camilla M. Mann October 25, 2018
This is a sponsored post written by me on behalf of González Byass, an #InternationalSherryWeek sponsors.
Complimentary wine was provided for this post and this page may contain affiliate links.
However, all opinions expressed here are my own. 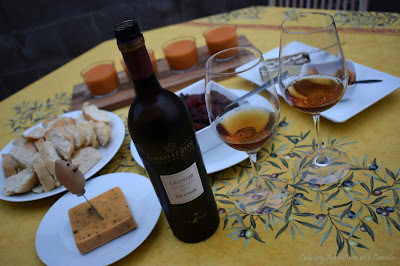 A couple of weeks ago, Jeff from FoodWineClick! shared an opportunity with the #WinePW (Wine Pairing Weekend) crew to receive samples of Sherry. Since my experience with sherry is next to nothing, I was excited to taste and learn more. Really, whenever I think of sherry, I think of cooking sherry. I was thrilled to be proven incorrect. 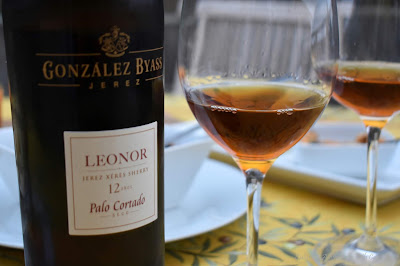 I received two bottles of Sherry from González Byass* and really wasn't sure how to pair it. I am still definitely in the novice-Sherry camp; but I can happily say that both Jake and I are fans!

After reading the tech sheets from the sponsor, I wanted to pour the Sherry with a wine-braised chorizo (similar to this one) and some other small Spanish nibbles. I settled on the Leonor, a beautiful Palo Cortado sherry. In the glass, the Leonar pours a rich, amber color with golden highlights and an orange rim. On the nose, we got nutty aromas of roasted chestnuts and toasted almonds. And, on the tongue, this wine was powerful, well-balanced, and made me think of salted caramel that's more salty than sweet. What a delicious sip! 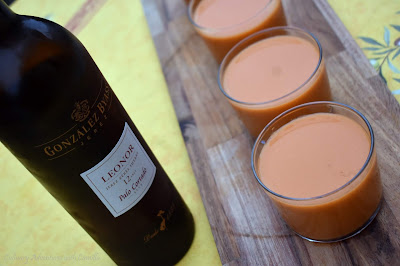 While I made an al fresco dinner out of braised chorizo, olives, and some Spanish cheeses, I wanted to serve a homemade gazpacho with the Sherry as well. Originating in the Spanish region of Andalusia, but popular all over the Iberian Peninsula, gazpacho is a soup made of raw vegetables and served chilled. More of a drink than a soup, this version has no bread and is a creamy, orange-pink color rather than a dull lipstick red.

Last year I had the pleasure of having gazpacho at our Spanish friends' house! And I asked her her secret because the color was beautiful. Two words: olive oil. She said to add more olive oil than I would think necessary. This is not Susanna's recipe because I forgot to use bread and added vinegar; I also added a splash of honey because there was something bitter about the soup. However, after letting it sit overnight, everything had mellowed and was more balanced. 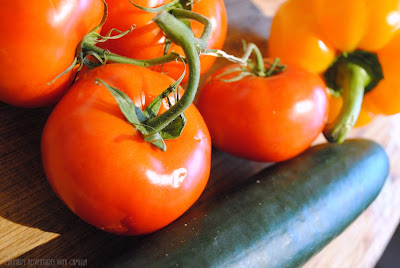 Work in batches, if necessary. Combine tomatoes, pepper, cucumber, and garlic in a food processor or blender. Blend until very smooth, at least 2 minutes.

With the motor running, pour in the vinegar and 2 teaspoons fleur de sel. Slowly drizzle in the olive oil. The mixture will turn bright orange or dark pink and become smooth and emulsified, like a salad dressing. If it still seems watery, drizzle in more olive oil until texture is creamy. At this point, there was something really bitter about mine, so I added in a tad of honey.

Strain the mixture through a strainer or a food mill, pushing all the liquid through with a spatula or wooden spoon. Discard the solids. Adjust seasoning with salt and vinegar, as needed. Transfer to a glass pitcher or jar and chill until very cold, at least 6 hours or overnight.

Serve in glasses, over ice if desired. You can also add a few drops of olive oil and vinegar on top before serving. 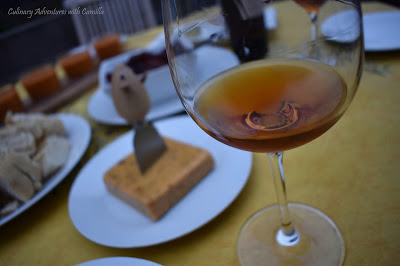