By Camilla M. Mann April 21, 2021
This is a sponsored post written by me on behalf of L'Ecole.
Complimentary wine was provided for this post and this page may contain affiliate links.
However, all opinions expressed here are my own. 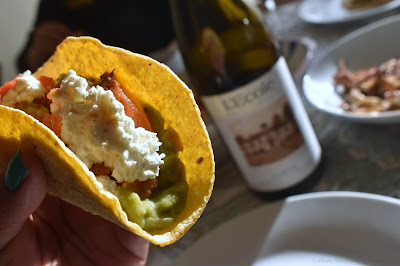 If you're been following my blog, you'll know that I'm doing a series of monthly posts in collaboration with L'Ecole Winery.* A group of us participate in a virtual tasting with their marketing manager, the winemaker, and the general manager and discuss timely topics. This month, we were talking about sustainability; it is Earth Month, after all, with tomorrow - April 22nd - being designated as Earth Day! It's also Walla Walla Wine Month. So, we raised our glasses with L'Ecole's 2018 Estate Seven Hills Vineyard Syrah. 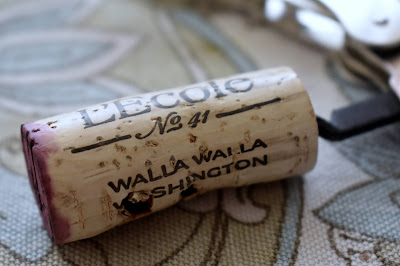 Some months I hope to share more than one pairing with one being posted on my Culinary Cam YouTube channel, such as the Savory Goat Cheese Truffles + L'Ecole's 2019 Sémillon video: here.

I kicked off  this series in February when I shared Musings on Marriage, Moruno-Spiced Burgers, &  L'Ecole's 2017 Columbia Valley Cabernet Sauvignon ahead of Valentines' Day. Last month, I'm celebrated the change of season with Raspberry Basil Salsa-Topped Salmon + L'Ecole's 2018 Walla Walla Valley Cabernet Franc Merlot. And, this month, as I mentioned already, is a nod to sustainability. 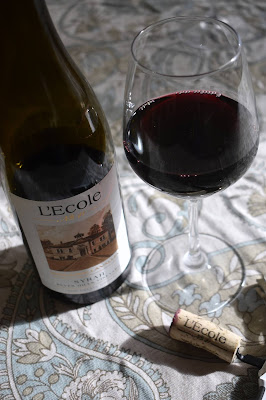 L'Ecole has a multitude of practices in place to promote sustainability and all of their estate wines are Certified Sustainable and Salmon Safe. You can visit their new sustainability page to get lots more information.
But let's dig into that a little bit more here. There are three levels of certifications that Constance addressed: biodynamic, organic, and sustainable - the latter of which is often seen as the "least committed. "However, she noted that, as an example, a grower can go overboard in using copper and sulphur and still be certified organic. So, even though L'Ecole doesn't hold an organic certification, they have some fervent views on a sustainable practice.
Constance and Marcus both mentioned Sadie Drury's commitment to the safety of her vines and her people. Drury manages eight vineyards including Seven Hills Vineyard and has said of her philosophy that she should be able to work all day in the vineyard walk into her house and hug her family and sit on her couch without having to take off a hazmat suit or worry about any chemicals on her body and clothes.
And Marty Clubb, L’Ecole's owner and managing winemaker, embraces low-impact, soft-impact, and targeted impact to do as little as possible to impact the ecosystem. That brings me to their Salmon Safe Certification. Salmon Safe is a not-for-profit organization committed to restoring the rivers and streams of the Pacific Northwest to a livable habitat for native salmon. They work with farmers and scientists to establish a set of rigorous guidelines to protect salmon habitat. Essentially, Constance shared, "if we do anything that goes into a waterway, we ensure that it doesn't hurt the species in that waterway."
Another of the Salmon Safe guidelines includes improved irrigation. Marcus addressed their use of a device from Fruition Sciences that monitors sap flow in the vines through heat sensors directly installed on the plant. He explained that it sends a constant uplink and they synthesize that information with water patterns and historical water data so they can water with absolute precision. With the use of this monitor, L'Ecole has been able to reduce its water consumption at its estate vineyards by fifty-percent!
So, now we know about some of the sustainable practices in place at L'Ecole, let's talk about this wine... 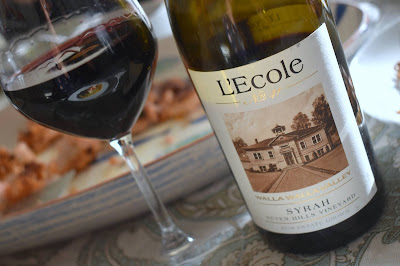 A single varietal wine, this is 100% Syrah from the Seven Hills Vineyard. Marcus discussed the 2018 being a 'unicorn vintage' in that everything was perfectly timed. Picked over two days in September, it was bottled in February of this year and is just now being released. You can order this wine on their website.
Here are a few of my tasting notes. On the nose, I noted lots of florals. Not overly heady, just a delicate mix of violets and rosemary flowers. On the palate, there were still the flowers, but this wine leaned much more savory which I loved. I wrote down redwood duff and earthy mushrooms with a hint of salinity like a green olive. And over the course of tasting the wine, it grew more lush and silky in the glass.
Falconery 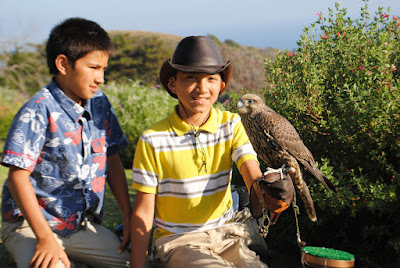 Some of the guidelines for Salmon Safe include planting trees, growing cover crops, improving irrigation, and applying natural methods to control weeds and farm pests. Marcus let us know about L'Ecole's use of falconry to deter the starlings who nest in the orchards. During September and October, a falconer is brought in every couple of days. Just having birds in the air several times a week is enough of a deterrent.
I decided to dig out some photos of my boys when we attended a fundraiser for California condors and were able to talk to several local falconers and interact with their birds.  I have always appreciated hands-on learning for myself and our boys! 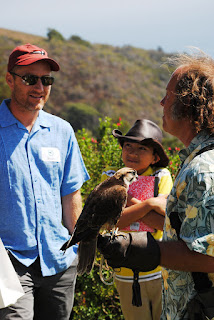 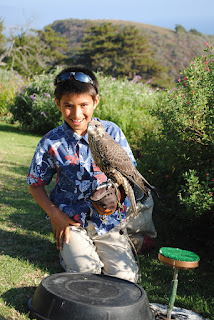 You can tell how long ago this was as both of our boys now tower over Jake...and me. But that's not too difficult as I'm only 5'2" tall! In fact, when R looked over my shoulder and saw these photos on the screen, he said he only vaguely remembered that day.
Soft Tacos 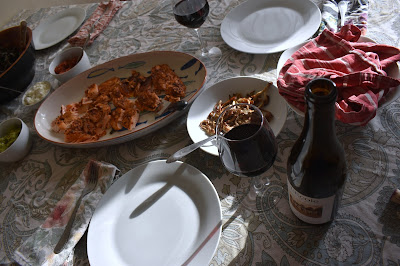 When I first planned my pairing, because the wine is Certified Salmon Safe, I picked up some certified sustainable salmon at the fish market and was going to write about wild caught versus sustainably farmed salmon. 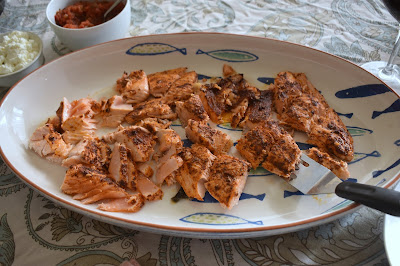 And I did still make the roasted salmon. You'll get that recipe soon. I promise. 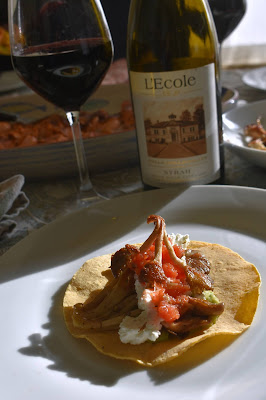 But, during the virtual tasting, we brainstormed pairings and grilled oyster mushroom tacos popped into my head. Constance, Marta, and Marcus all endorsed that idea. So, I changed directions and am sharing that pairing instead. Goat was mentioned several times as a match for this wine and I didn't have any goat, but I did have goat cheese, so I used that on my soft tacos.
Ingredients serves 4 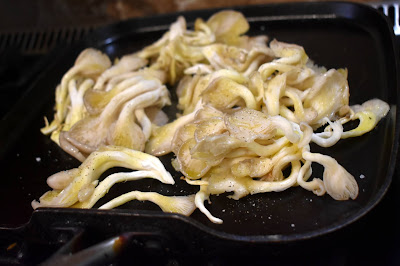 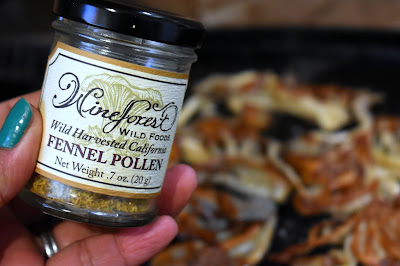 Crisped Mushrooms
Heat olive oil in a large, flat-bottom pan. When the oil is nice and shimmery, lay your mushrooms in the pan. Let the mushrooms brown and crisp. Flip the mushrooms and crisp them on the other side. You can even press them down with another pan if you want them super  crispy.
Only after they are crisp should you season them. Adding salt when they are cooking will lead to soggy mushrooms. Season to taste with salt, pepper, and - my favorite culinary fairy dust - fennel pollen. 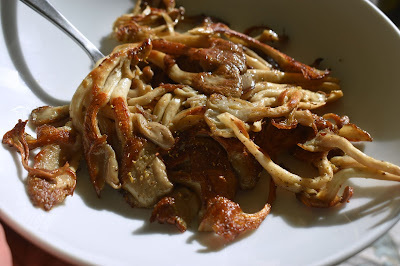 Serve the mushrooms with warmed tortillas and let everyone assemble their own soft taco creations. 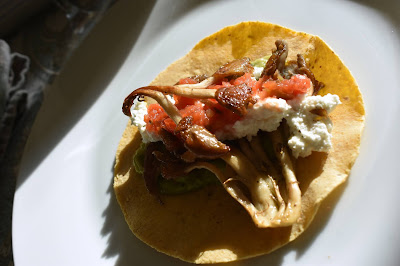