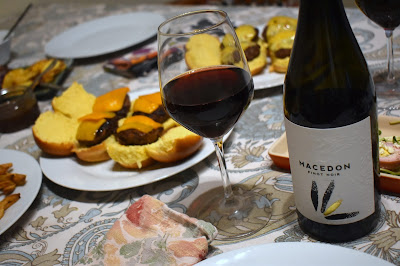 This month the Wine Pairing Weekend bloggers are being led by Andrea of The Quirky Cork in an exploration of wines from under radar European regions. Read her invitation.
If you are reading this soon enough, please join us in a live Twitter chat on Saturday, April 10th at 8am Pacific. Just follow the hashtag #WinePW and be sure to add that to anything you tweet so we can see it. All of these offerings will be live before the chat on Saturday. Here's what the group is sharing...
A Wine from Turkey 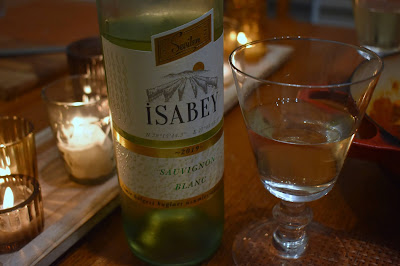 Andrea lives in Turkey and I have long coveted the wines she shares with our blogging groups, so I set about trying to find a Turkish wine to pair. I was able to  get my hands on a bottle of the Sevilen Sauvignon Blanc 2019. And I even made Çilbur and Patates Bastısı to go along with it.
But, when I was shopping for our Easter dinner last week, I came across a bottle of Pinot Noir from the Republic of Macedonia. So, I switched directions and am sharing the 2017 Macedon Pinot Noir with the #WinePW group instead. Not to worry: I will share the Turkish Sauvignon Blanc, my tasting notes, and recipes soon.
Modern Macedonia 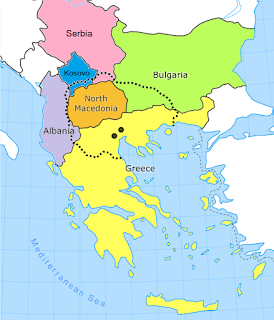 wikipedia.com
I'll be honest: When I first picked up the bottle, I was thinking that they were referring to the kingdom in Ancient Greece. You know, the one from which Alexander the Great came. And Greece isn't an under-the-radar wine region in my book as I've poured several bottles from there such as the Gaia Ritinitis Nobilis Retsina I paired with braised rabbit or the traditional semi-sparkling orange wine that I poured with Garides Saganaki.
But a quick bit of research - along with asking my geographically-aware teen - told me that modern Macedonia is its own country, also called North Macedonia or the Republic of Macedonia. Perfect for this month's Wine Pairing Weekend theme!
In My Glass 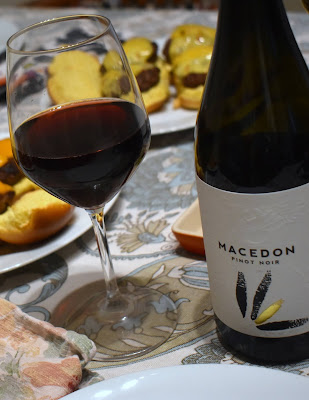 As I mentioned, I found this at a local  grocery store and I was fascinated that Whole Foods carried a wine from Macedonia. Further reading actually intrigued me more because I discovered that the Vardar River Valley in Macedonia is at roughly the same latitude as the Burgundy region in France and the Russian River Valley here in California, both of which are Pinot Noir powerhouses.
This wine is made from grapes that are four decades old, but grape cultivation goes back much, much further than that. The Vardar River Valley is historically significant to wine in that it lies at the crossroads between Europe and Asia. Historians surmise that it might be the first area where grapes carried from Mesopotamia were actually cultivated. And archaeological evidence shows that people were growing grapes in this area as early as 13th century BC. 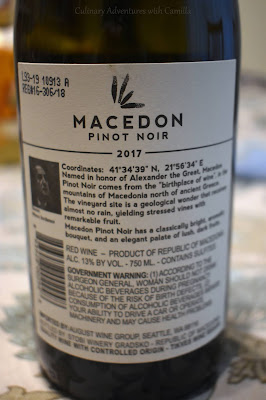 I could not verify the blend  percentages for the 2017 vintage, but the 2016 was 95% Pinot Noir and 5% Vranec which is an ancient grape variety indigenous to the Republic of Macedonia, Serbia, and Montenegro. Given my love of godforsaken grapes, I hope this year's also included the Vranec. But, as I mentioned, I can't be certain. 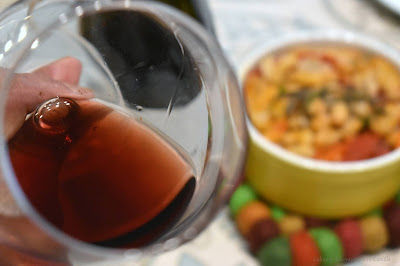 I was able to find that the grapes were soaked with skins-on for 18 hours before being fermented in stainless steel. The wine poured a beautiful garnet color. On the nose there were lots of dark fruits such as plum, but it was the earthy redwood duff that intrigued me. And on the palate those fruits persisted with a rich savory quality of a wild mushroom.
On My Plate 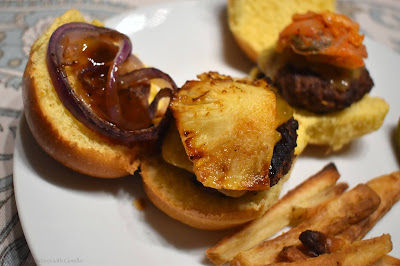 I initially paired the wine with our Easter sliders. Yes, you read that correctly: I served burgers for Easter. While I was dreaming about roasting a leg of lamb, my trio enthusiastically requested burgers. For. Easter.
"But, Mom," they chimed, "you can make them fancy burgers." Done. I served a teriyaki slider with grilled red onions, pineapple, and cheddar cheese and a kimchi burger with two kinds of kimchi and pepper jack cheese. The teriyaki sliders were similar to this one...just smaller and not on homemade seeded sourdough buns.
The wine paired beautifully with the burgers. Still I wanted to make something that was more illustrative of the region's cuisines. So, for the second night of pouring the wine, I went for a traditional Musaka for us omnivores and a Tavče Gravče for my plant-based husband. Well, he's plant-based during the week anyway. 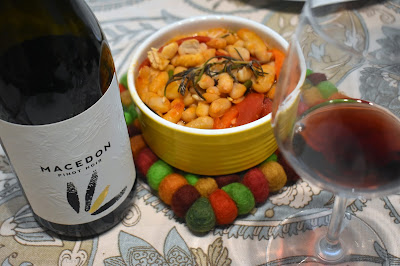 I will share the Tavče Gravče recipe another time, but it means 'beans cooked in a pot'. I made a version with white beans, onions, and charred red peppers. It was a hit with everyone, not just the part-time vegetarian!
Musaka 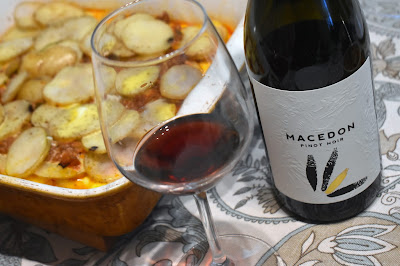 Musaka is a Macedonian dish similar to the Greek Moussaka, but made with potatoes instead of eggplant. Or like Italian lasagna, but make with potatoes instead of pasta...and a lot less cheese. In any case, this dinner launched us into a discussion of international 'casseroles.' I wouldn't typically call any of those casseroles because that word conjures up way too many dishes from well-meaning Oklahomans after I had my second baby when we transplanted to the Mid-West for almost a year. Seven layer casserole. Taco casserole. Tuna noodle casserole. Enchilada casserole. I have never had so many casseroles in such a short amount of time. But the boys were quick to point out that this was baked in a casserole dish. Fine. 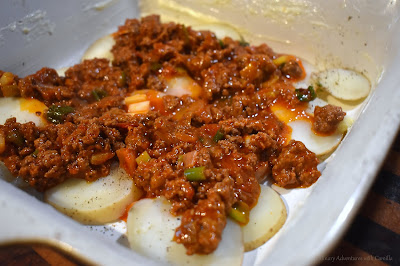 Slice potatoes to about 1/4" thick. I used a mandolin slicer for uniformity. Place them in a pot of salted water and bring to a boil. Cook for 5 minutes just to parboil them. Drain and set aside.

In a large skillet, heat olive oil over medium heat. Add the onions and cook for 2 to 3 minutes until they begin to soften. Add in the ground beef and cook until browned. Use a wooden spoon to break up the clumps as it cooks. Stir in the tomato sauce, red wine, and smoked paprika. Simmer until the sauce thickens. Adjust seasoning with salt and pepper to taste.

Layer one-third of the sliced potatoes on the bottom of a baking dish. Sprinkle with salt and pepper. Spoon in half of the ground beef mixture and spread evening over the potatoes.

In a medium mixing bowl, whisk together the eggs, milk, and yogurt or sour cream. Add in some salt and pepper and pour the mixture over the potatoes.

Bake in the preheated oven until potatoes are tender and top is golden brown, approximately 50 minutes. You can broil to crisp the top further, if desired.

Let stand for 10 minutes before slicing and serving.  I served this with a crisp green salad on the side. Delicious. 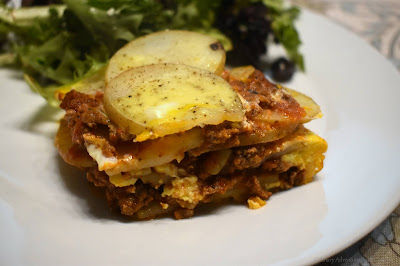 Many thanks to Andrea for picking such an intriguing topic. The #WinePW bloggers will return next month with Middle Eastern food and wine pairings with Wendy of A Day in the Life on the Farm leading the charge. Stay tuned.