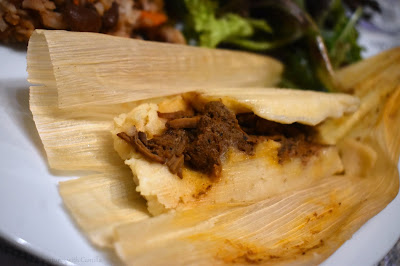 This month Gwendolyn of Wine Predator is hosting the Italian Food Wine Travel bloggers in a discussion about Barbera wines. You can read her invitation: here.
If you are reading this early enough, feel free to join our live Twitter chat on Saturday, May 1st at 8am Pacific time. Just follow the hashtag #ItalianFWT and be sure to add that to anything you tweet so we can see it. Here's the line up of what the bloggers are sharing on the subject...
Exploring a Few Bottles of Barbera 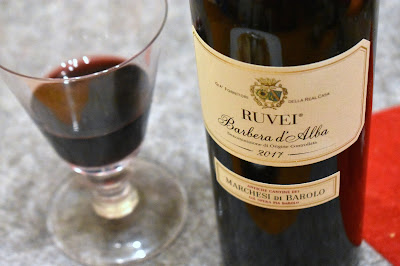 I have always loved Barberas. Until recently I only had Barbera wines from Italy, but for the March 2021 #ItalianFWT I poured a Barbera from California! Two  years ago - back in March 2019 for #ItalianFWT - I posted Braised Short Ribs + 2016 NuovaCappelletta Barbera del Monferrato. And I've even poured and paired a Barbera blend from Israel in Peppered Brisket, Honeyed Onions, and the 2016 Galil Mountain 'Ela'.

Barbera is a red Italian grape variety that is the third most planted grape in the country. And I've read that it's probably a millennium older than Cabernet Sauvignon. Even still, until very recently, Barbera was virtually unknown in the American markets.

In Italy, Barbera is cultivated in the Piedmont area - the same region renowned for the Nebbiolo grape variety and the Barolo and Barbaresco wines that come from the Nebbiolo grape. But the wines from the Barbera grape are much more affordable.  I haven't come up with a reason for that yet. However, it means that Barbera can easily be an everyday sipper. And though usually very intensely colored, Barbera is surprisingly light in taste. Because it's also usually low in tannins and high in acidity, it's a perfect match for the richness of cheeses and meat dishes. 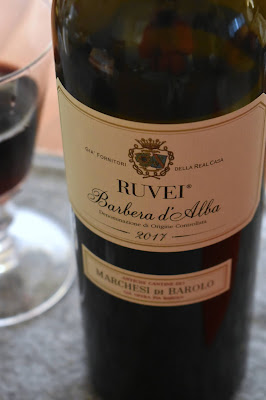 The Marchesi di Barolo Barbera d'Alba Ruvei 2017 comes from an estate in the Langhe that was originally owned by Marchese Carlo Tancredi Falletti di Barolo and his wife, Giulia. But they had no heirs and when they died, their assets were donated to a local charity. Eventually Pietro Abbona, a local winemaker, purchased the cellar and all the vineyards. And it is now under the leadership of Pietro's great-grandson and fifth generation winemaker, Ernesto.
Langhe is a hilly sub-region in the Piedmont (Piemonte); it lies in the Cuneo province, east of the Tanaro River and south of Alba. Its name Langhe is the plural form of langa, a word in the local dialect for a long, low-lying hill.
The grapes are all hand-harvested before being macerated with their skins for just over a week. Then they are aged for six months in Slovenian oak casks. The wine pours a deep crimson color with a clear  ruby rim.  On the nose, there are aromas of berries and spices along with a hint of forest floor. On the palate, the wine is round and full-bodied.
Fontanafredda Briccotondo Barbera 2018 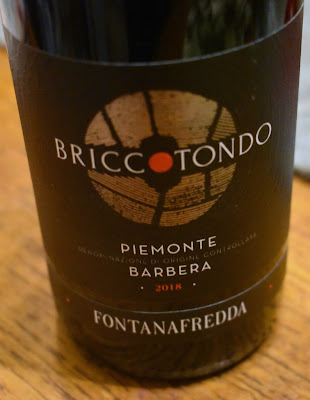 The second Barbera I explored came also came from the Piemonte - from the Fontanafredda Estate. The estate began in 1858 when, just after Italy's unification, Vittorio Emanuele II purchased the property. He began producing wines from native varieties: Dolcetto, Barbera and Nebbiolo. The first Nebbiolo from Fontanafredda was released with the 1878 vintage.
Currently the estate is owned by partners Oscar Farinetti and Luca Baffigo Filangieri who also own the renowned EATALY concepts in New York, Italy, and Japan. Led by winemaker Danilo Drocco and viticulturist Alberto Grasso, the winery and estate are guided with the principals of ecological responsibility and on-going sustainability. And the estate is assisting other winemakers in the same standards.
The wine pours a wine that is mostly red with some flecks of purple. The aromas lean heavily towards black fruit with hints of both pepper and cinnamon. On the palate, the wine is surprisingly soft with a lengthy finish.
In My Glass 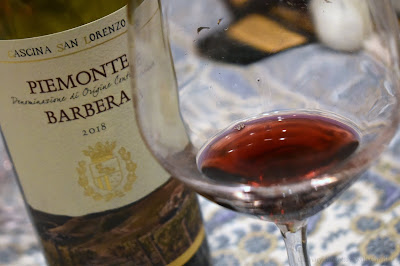 The grapes for this wine come from the historic vineyards in Serralunga d’Alba, Sinio, Santa Vittoria d’Alba, and Canale. For me, the flavors were decidedly red fruit, specifically cherry - and ran the gamut from sweet to tart. I also noted more savory aromas of cocoa and chocolate. This had all of the elements that I really enjoy about Barberas: leathery, earthy characteristics that temper the fruit and add complexity. 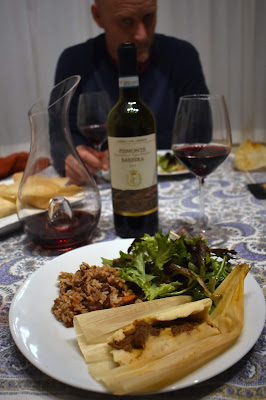 I decided to pull the wild boar stew meat out of the freezer on a still-chilly evening in April. And I opted to make some wild boar tamales with the 2018 Cascina San Lorenzo Barbera. I know it's not an Italian dish, or even Italian inspired, but, yeah, it worked! 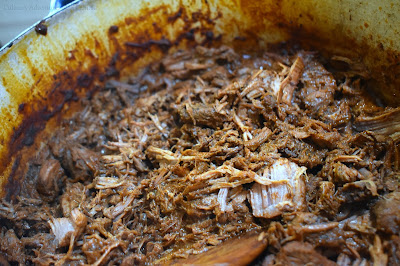 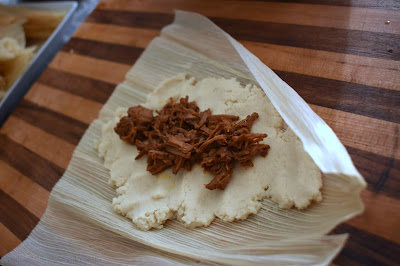 Heat the oil in a large pan or pot. Stir in the garlic, then add the boar meat into the pot. Sear on each side for  3 to 5 minutes - until a nice brown begins to appear.

Add the onions and let them cook until the onion is translucent and beginning to caramelize.

Pour in the broth and red wine. Stir in the tomato sauce. Bring to a boil. Then, reduce the heat to a simmer and cover. Let the meat braise for at least two hours - longer is fine, too. Once the boar is tender. Use a fork to shred the meat slightly. Raise the heat to reduce the sauce to your desired thickness. Season to taste with salt and pepper. 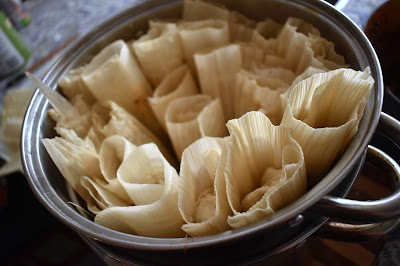 Tamales
Place the corn husks in a large lidded pot. Pour boiling water over the top and cover. Let soak for an hour. Drain when ready to assemble.

While the husks soak, make the masa. Mix the first five ingredients together in a bowl and stir till it comes together into a ball. Cover and let rest for 30 minutes.

Assembly
Lay a corn husk on a cutting board and spoon a scant 1/3 cup of the masa into the center. Press it as flat as possible. Spoon 1 generous Tablespoon of meat on top of the masa. Fold the edge of the corn husk over the stuffing and roll the corn husk to form tight roll.

To serve, each diner opens the corn husk on his or her own plate. Garnish with sour cream and salsa.
That's a wrap for the #ItalianFWT Barbera event. We'll be back in June when Susannah of Avvinare leads a celebration of National Lambrusco Day. Stay tuned...