By Camilla M. Mann April 23, 2021
This is a sponsored post written by me in conjunction with the #GotAlbariño event with the #WorldWineTravel group.
Wine samples were provided for this post and this page may contain affiliate links. 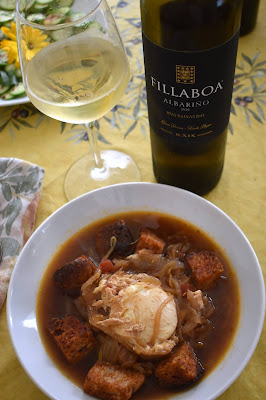 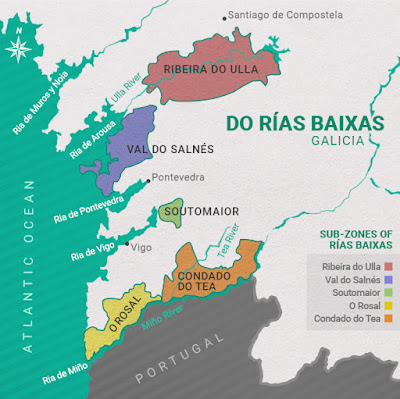 from https://www.riasbaixaswines.com/
Rías Baixas is a region of the Atlantic Ocean with estuarine inlets, called rías in Spanish, that flow almost 20 miles inland. Val do Salnés on Spain's west coast is said to be the birthplace of Albariño. Traditionally, families had individual plots of the grape planted on pergolas. The grapes were hand-picked and aged on the lees in large foudres made of chestnut wood.
Jorge Ordóñez is credited with bringing Albariño to the United States in 1991 as he was the first to export it. He founded Bodegas La Caña in 2008, after years promoting and launching the Albariño variety in the United States. Named for the straw-like cañas (reeds or canes) that border the inlets along the granite coast of Galicia, Ordóñez's aim is to produce traditional, authentic, and quailty Albariño, in an artisan style. You can read about the pairing I did with one of his wines last month: Spring Risotto Topped with Shaved Asparagus + La Cana Albariño 2019.
But for this event Gregory + Vine* sent a curated package with three different bottles of Albariño from the Rías Baixas and treated us to an amazingly well-coordinated and beautifully orchestrated virtual trip led by Rick Fisher, the Spanish Programs Director of the Wine Scholar Guild. Stephanie Gutierrez and Trish Heywood of Gregory + Vine also joined in the fun and games.
A Virtual Trip 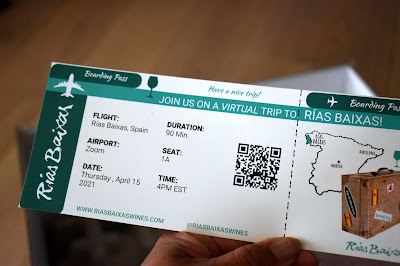 From north to south, DO Rías Baixas encompasses five distinct sub-regions: Ribeira do Ulla, Val do Salnés, Soutomaior, Condado do Tea, and O Rosal. Our first stop was the Val do Salnés, named for the salt flats, which is known as the birthplace of the Albariño grape. We visited Martín Códax where we heard from Katia Álvarez, Winemaker, and Miguel Tubío, Director of Viticulture. I'll devote a different post to Martín Códax and the wine that we poured.
Fisher shared a fascinating fact and others mentioned it as well: more than 50% of the winemakers in Rías Baixas are women. And we also saw how women played an important role in local products such as the shellfish and seafood industry. A stop at Casa Solla featured a chat with Chef Pepe Solla who shared his thoughts on simple dishes based on quality products; he also talked about how foods start with tradition, then they evolve in the kitchen.
Then we ended up in the Condado do Tea region which borders Portugal and is the warmest of the sub-zones. Both the 2020 Fillaboa Albariño and 2020 Robalino Albariño came from that area, but I will be featuring the former in this post.
In the Glass 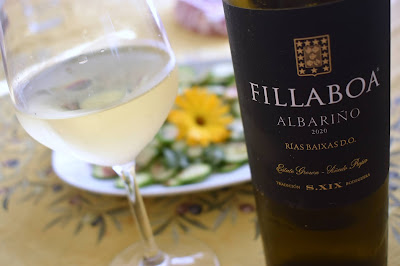 On our virtual bus ride, Fisher, Gutierrez, and Heywood talked about the Fillaboa estate and the elements that made it a manor or a pazo. A what?!? They bantered about a granary, an aviary, a chapel, and - of course - the house itself. During the segment with Isabel Salgado de Andrea, Fillaboa's winemaker, she clarified that saying which referred to the homes of Galician nobility. "If there’s a dovecote, chapel, and at least one cypress (tree), then it's a manor house." A little more research revealed the pazo was more than just a manor or noble's home. It was the center around which the social structure of the entire community revolved. 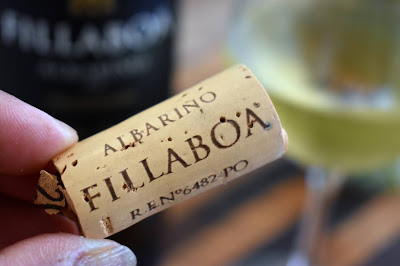 Salgado de Andrea also told the legend of the the estate's name, Fillaboa, which means 'good daughter' in the Gallego dialect. More than couple of the people talked about how land was inherited in Galicia; it is divided equally between all the children. So, legend has it that when the Count who owned the parcel was dying. He gifted the best piece of his estate to his good daughter and the other two received less than desirable plots.

Today Bodegas Fillaboa is owned by the Masaveu family, which can traces its winemaking roots back to the 19th century. Fillaboa exclusively uses its own estate-grown fruit and also native yeasts. 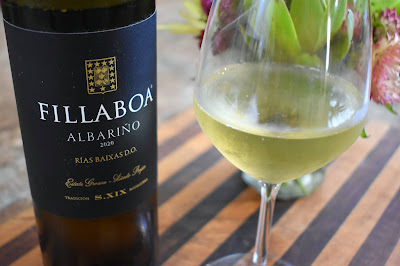 This single varietal wine is 100% Albariño though its fruit represents eight different plots on  Fillaboa's estate. In the glass the wine pours a vibrant straw color with flecks of green. On the nose, its aromas are tropical with lots of pineapple and mango with layers of citrus. On the palate, the wine is full and round, a result of its time on the lees. There is a hint of saline that reminds me of the saying that the wines from this region taste like the sea. 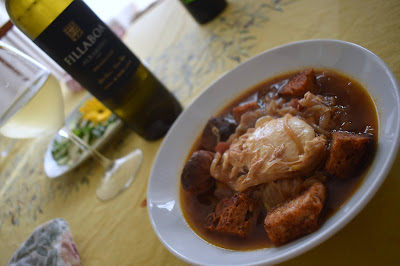 Initially I wanted to pair this wine with seafood. That seemed the most natural pairing. But, then, I decided to start with some of my favorite ingredients and go from there. I had a dozen fresh-laid eggs from friends' hens; I had onions from our CSA (community-supported agriculture) share; I usually have jars of bone broth in my fridge; and I always have leftover sourdough bread as I bake it multiple times a week.
In flipping through cookbooks, I found a version of a Spanish onion soup. French onion soup is a family favorite and I was eager to make my own version of the Spanish one that has crisped croutons and an egg poached in the broth.
Ingredients serves 4 to 6 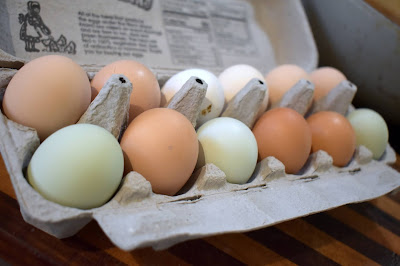 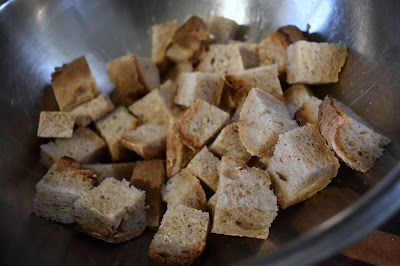 Croutons
Preheat oven to 375 degrees Fahrenheit. Line a baking sheet with parchment paper or a silicone mat and set aside.
In a large mixing bowl, drizzle the olive oil over the bread chunks.  Then sprinkle in the paprika, garlic powder, salt, and pepper. Toss until well-combined and turn out onto the prepared baking sheet.

Bake until golden brown. Turn once during baking, approximately 10 to 15 minutes in. My croutons generally take about 20 minutes, but it does depend on the thickness of your cubes. 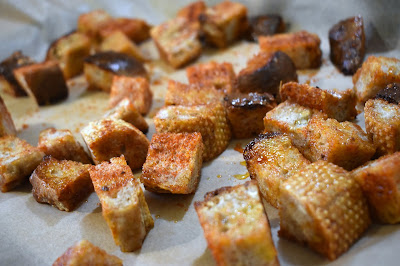 Remove baking sheet from oven and let croutons cool completely. Use immediately, or store in an air-tight container for up to 3 days. 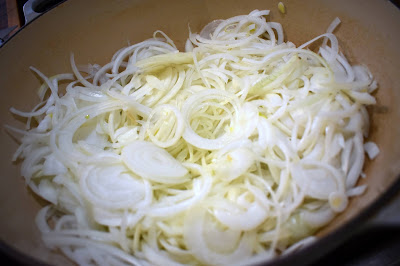 Soup
Melt the butter in olive oil in a large souppot, or Dutch oven, over medium heat. Stir in the onions. After 15 minutes, or as soon as the onions begin to brown, reduce the heat and cover, stirring frequently. Cook until the onions are caramelized, approximately 30 to 40 minutes.

Stir in the salt, pepper, and paprika. Pour in the sherry and raise the heat. Bring the liquid to a boil and let the alcohol cook off, approximately 2 to 3 minutes. Pour in the beef stock and bring it back to a boil. Reduce the heat to a simmer and cook for another 20 to 30 minutes. Season to taste with more salt and pepper, as needed.
Just before serving, crack your eggs into the broth and simmer until poached. 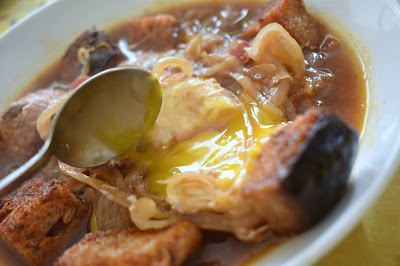 To serve, ladle soup into individual bowls. Scatter croutons around the edges and spoon one egg into the center. Serve hot. 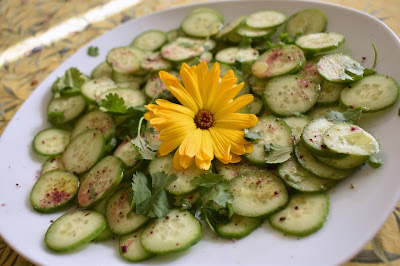 And that is a wrap for the #WorldWineTravel #GotAlbariño event. We'll be back in May when Wendy of A Day in the Life on the Farm hosts the group's virtual trip to Aragon, Spain. Stay tuned.