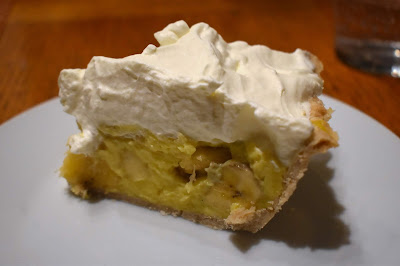 I have long been a fan of George Mahood's writing. Last year I read three of his books and did recipe posts for each one. You can click on the title to go to that original post -  Not Tonight, Josephine: A Road Trip Through Small-Town America; Free Country: A Penniless Adventure the Length of Britain; and Travels with Rachel: In Search of South America. So, when I saw Every Day Is a Holiday by George Mahood* I ordered it immediately.
On the Page 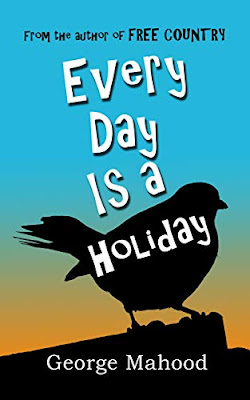 I am not sure if it was the subject matter - Mahood details the first six months of a year as he attempts to celebrate off-the-wall holidays each and every day - or what...but this is my least favorite Mahood book. Sorry, George.
It was an interesting premise that grew a little tedious. As an example of holidays, we're talking about No Housework Day, National Beer Day, Caramel Popcorn Day, Nutella Day, etc. He writes, "Fruitcake Toss Day is a strange day. The idea is that you can finally get rid of that fruitcake that has been lurking around since Christmas. Where you toss it, I’m not sure, but it sounded pretty awesome."
And on Great American Meat Out Day, he went to a "tapas restaurant, and in the spirit of Great American Meat Out Day we ordered 12 different dishes, mostly meat; slow-roast pork belly, Spanish morcilla sausage, chorizo, meatballs, steak, lamb, chicken and of course some Spanish ham."
Maybe it was just a little too esoteric for my tastes. Still his writing is fun and fast. So, I'll just keep an eye out for another book by Mahood.
On the Plate 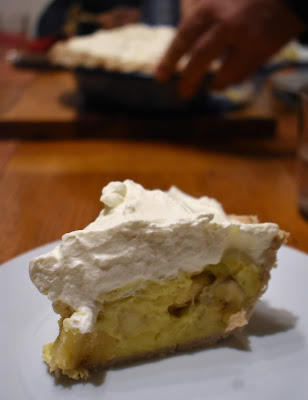 I didn't make a note as to whether he wrote this about National Pie Day which is January 23rd or Pi Day as in March 14th or 3.14. But I did laugh about his pie commentary: "...pie is UNDOUBTEDLY the world’s greatest invention. They say that pies were first made by the Egyptians in about 2000 BC, although how ‘they’ know this I have no idea. I doubt the Egyptians painted hieroglyphics of themselves tucking into a Steak Bake or a Fray Bentos. ...The Romans then jumped on the pie bandwagon in about 100BC, and the first recorded pie recipe was for a rye-crusted goat cheese and honey pie."

And I just so happened to have an unpublished pie post in my folder. Done. This was from 2019, so long before COVID and before we have to wear masks and stay at home! So, the text and the photos are from the Before Times...

When we found out that one of the boys' friends was going to be staying with us for a weekend, I talked about what things we should cook with him. He has always enjoyed cooking and somehow we landed on banana cream pie. Probably because it's been so long since we've had it. Great!

And because they have done it before, I knew they would do most of the work. I did swap in some banana flour because I was intrigued by the package. It's gluten-free and has a strange hue. Also, it didn't really impart any banana flavor to the crust, but I think the kids liked that it was a banana cream pie in a banana crust. 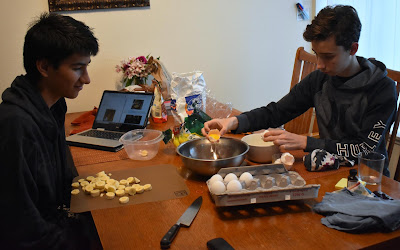 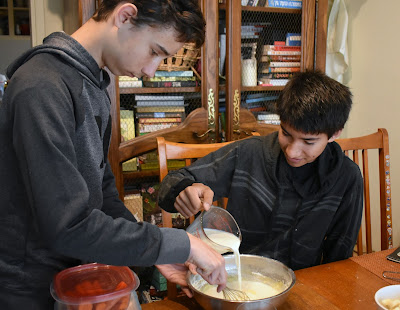 Crust
In a food processor, pulse the flour with the sugar and salt. Add the butter cubes and pulse until chunks the size of small peas form. Pour in 1/4 cup of cold water or vodka and pulse, again, till the dough comes together in a ball. Turn out the dough onto a piece of parchment paper and knead 2 to 3 times. Form into a disk, wrap in plastic and refrigerate until firm, approximately 1 hour.

Preheat the oven to 375 degrees Fahrenheit. Roll out the dough between two pieces of parchment paper, then transfer to a 9-inch pie plate. 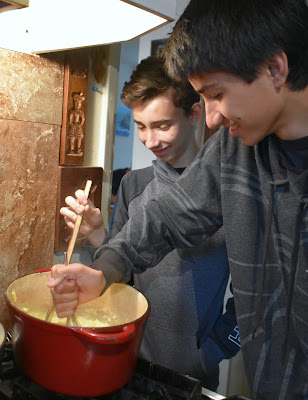 Banana Cream Filling
Combine the milk, salt, and vanilla in pot and heat, stirring occasionally. As soon as the mixture begins to boil, turn off the heat and stir the mixture for one minute. Whisk the egg yolks and sugar together until thick and pale yellow, then whisk in the flour until moistened and smooth. Gradually whisk in half of the hot milk mixture.

Pour the yolk-milk mixture back into the pot and cook, whisking frequently, until the mixture boils and begins to thicken. Reduce the heat to medium-low and cook, stirring, approximately another 5 minutes. The mixture should become very thick, like a set custard. When cooked, turn off the heat.

Stir in the butter until it melts completely and fold in the bananas. 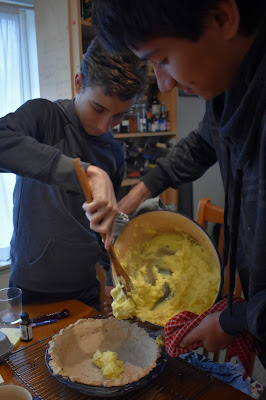 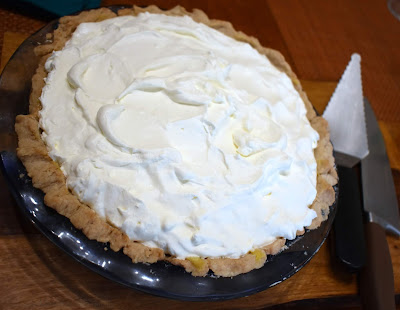 Top with whipped cream and serve. 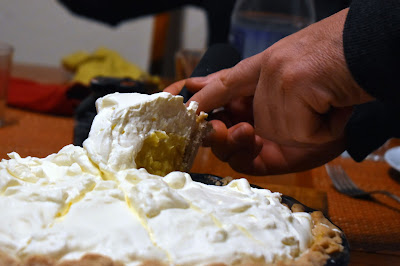 They did a great job on this pie. Even I ate a few bites...and, if you know how often I indulge in the sweets that come out of my kitchen, you know how rare that is.
*This blog currently has a partnership with Amazon.com in their affiliate program, which gives me a small percentage of sales if you buy a product through a link on my blog. It doesn't cost you anything more. If you are uncomfortable with this, feel free to go directly to Amazon.com and search for the item of your choice.

Click to see what everyone else read in April 2021: here.