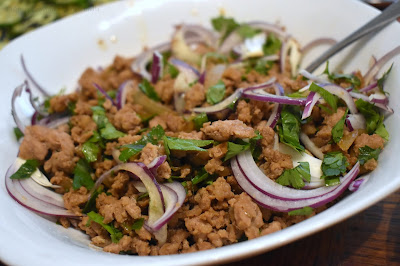 When I saw the country reveal for our focus in my online #EattheWorld group - Laos - I immediately started researching and discovered that they have similar dishes to some of our other favorite cuisines such as Thailand and Vietnam. So, that evening I tested some recipes to compare and contrast. I shared what I had made and one of my best blogging pals - Wendy of A Day in the Life on the Farm - said that she was going to post pork larb for this event; I decided to share my version now and I'll save one of the other recipes for posting day on October 10th. Stay tuned... 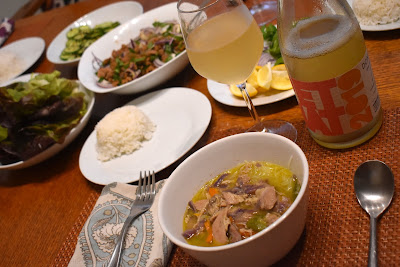 As I mentioned, the pork laab (also called larb, laap, larp, and lahb) is very similar to a Thai version that I usually make. You can read that recipe:Thai Larb for the Team, Flat Stanley, and Annoying Person Shifts #FoodieReads. Like other dishes in Southeast Asian cooking, the dish combines savory, spicy flavors with fresh ones. The Laotian version is even more simple to assemble than my Thai version!


Procedure
In a small mixing bowl, whisk together the sugar, fish sauce, and lime juice. Set aside.

Heat your pot over high heat until smoking. Add the oil, ground pork, and all by ¼ cup of the sliced red onions. Cook until the pork is browned completely, approximately 5 to 6 minutes. Use a wooden spoon to break up the chunks of meat.

Before serving, scatter remaining red onions on top. Let diners spoon the laab into the lettuce leaves and add more cilantro and give a squeeze of more fresh lime, if they wish. 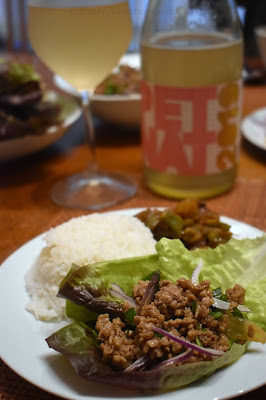 I poured the 2019 Pinot Meunier Pét-Nat from Donkey & Goat that they just shipped with their Fall 2019 release. You can read more about Donkey & Goat and the Brandts in this post: Donkey & Goat: The Brandts Bring Natural Farming Philosophies Into the Cellar that I posted recently for Wine Pairing Weekend (#WinePW).


'Pét-Nat', short for Pétillant-Naturel, is an ancient method of making sparkling wine. In contrast with the méthode champenoise in which a finished wine undergoes a secondary fermentation in the bottle with additional yeasts and sugars, Pét-Nats are bottled before the primary fermentation is finished. This produces a much more rustic sparkling wine that is often cloudy and bottled with a crown cap - like a beer - instead of a cork.

Though Pét-Nat can be made with any varietal, this one is Pinot Meunier made with grapes from 53-year-old vines in the Dommen Vineyard in Sonoma. The Brandts have been making this wine since 2017 and the grapes are pressed on the same day on which they were harvested.

As far as the tasting notes, this wine was beautifully funky with a tang that reminded us of our favorite kombucha with just a tinge of sweetness. It paired wonderfully with the salty spiciness of the pork laab.