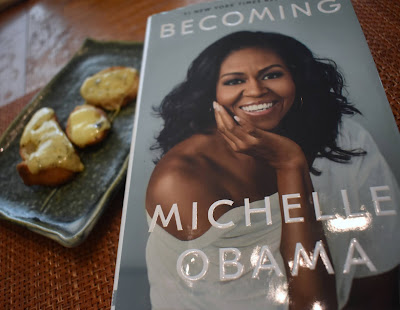 No matter what your political lean, Becoming by Michelle Obama* is a candid memoir that will leave you in awe of this articulate, elegant, and accomplished former First Lady. 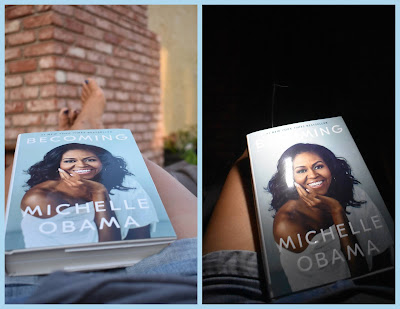 This has been on my bookshelf for several weeks - maybe months. And on the Labor Day holiday, I picked it up and retreated to a chair on the patio. Between cooking meals for the day, I read and read and read some more. When the sun went down, it was still sweltering inside my house. I retrieved my booklight and continued to read on the patio until it was time for bed.

She's articulate. We know that. She's Ivy League-educated - Princeton undergrad, Harvard law - but her parents insisted on proper language. On one family vacation, she recounts: "At one point, one of the girls, a second, third, or fourth cousin of mine, gave me a sideways look and said, just a touch hotly, 'How come you talk like a white girl?' The question was pointed, meant as an insult or at least a challenge, but it also came from an earnest place. It held a kernel of something that was confusing for both of us. We seemed to be related but of two different worlds. ...I knew what she was getting at. There was no denying it, even if I just had. I did speak differently than some of my relatives, and so did Craig. Our parents drilled into us the important of using proper diction, of saying 'going' instead of 'goin' and 'isn't' instead of 'ain't.' We were taught to finish off our words. They bought us a dictionary and a full Encyclopaedia Britannica set.... Dandy, too, was an influence, meticulously correcting our grammar or admonishing us to enunciate our words when we went over for dinner" (pg. 40).

She's accomplished. When she took her position as Executive Director of Community Affairs at the University of Chicago Medical Center, she explains, "I was well supported by my new boss, given the freedom to build my own program, creating a stronger relationship between the hospital and the neighboring community. I started with one person working for me but eventually led a team of twenty-two. I instituted programs to take hospital staff and trustees out into the neighborhood around the South Side, having them visit community centers and schools, signing them up to be tutors, mentors, and science-fair judges, getting them to try the local barbecue joints. We brought local kids in to job shadow hospital employees..., encouraging students in the community to consider medicine as a career. After realizing that the hospital system could be better about hiring minority and women-owned businesses for its contracted work, I helped set up the Office of Business Diversity as well" (pp. 209-210).

But, perhaps, her most endearing quality, at least for me, is her love of family. She is a fierce and loyal wife and mother. That is not to say that her role is solely supporting her husband and her children; she clearly has her own passions. But this is a fascinating glimpse into the life of the Obamas - how they met, their dating years, his unique proposal, and their marriage. It clearly expresses the philosophy behind their commitment to public service.

The word that comes to mind as I read this: gravitas. Gravitas was one of the ancient Roman virtues that connotes dignity, seriousness, and responsibility. At least that's how I remember it being described in Latin class; yes, I took Latin in high school...five years of it, in fact!
In Becoming, Obama reveals the human behind the title. She shows us how deeply she committed to being the First Lady of the United States and how seriously she took her responsibility to the people of this country. She has always had my respect. Now she also has my fervent admiration as well.
On the Plate 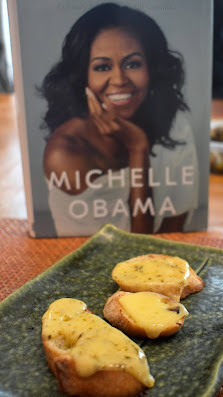 There was a surprising number of passages about food. Food as connection and routine between her and Barack as they met weekly for the same dinner at their favorite restaurant: pot roast, Brussels sprouts, and potatoes. Food as a comfort when she was in college and went to a relative's house for family dinners. Food as survival on the campaign trail that involved too many fast food meals and packages. Food as sustenance and nutrition when she worked with Chef Sam Kass to grow a garden at the White House and educate children about fresh fruits and vegetables.
But the dish that I decided to make embodied food as a pause, food that she made for herself when she wasn't responsible for anyone else for the evening or no one else was fussing about her.
"...I was hungry. I walked down the stairs from our bedroom with the dogs following on my heels. In the kitchen, I opened the fridge. I found a loaf of bread, took out two pieces, and laid them in the toaster oven. I opened a cabinet and got out a plate. I know it's a weird thing to say, but to take a plate from a shelf in the kitchen without anyone first insisting that they get it for me, to stand by myself watching bread turn brown in the toaster, feels as close to a return to my old life as I've come. ...In the end, I didn't just make toast; I made cheese toast, moving my slices of bread to the microwave and melting a fat mess of gooey cheddar between them. I then carried my plate outside to the backyard. I have to tell anyone I was going. I just went" (preface xii). 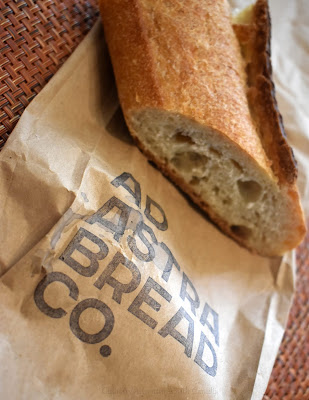 As a busy wife and mother myself, I know that doesn't happen often. When it does, I don't always make a healthy choice. Cheese toast probably isn't the healthiest choice either, but it is comforting. Also, I don't have a microwave, so I just let the cheese get melted and gooey on a skillet...and I used a sourdough baguette from our favorite local breadmaker and two raw milk gouda - one with black truffles and the other with lavender and thyme. Because, for me, cheese toast is all about the quality of the bread and the cheeses.
Ingredients serves 4 as an appetizer 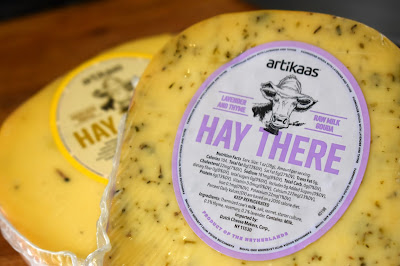 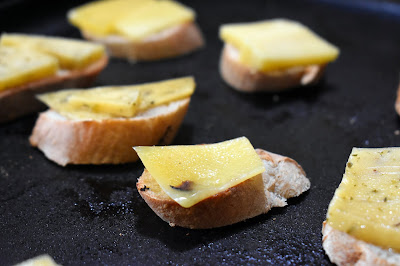 Run butter over the griddle and let it get nice and hot. Place baguette slices on the pan and heat until it's toasted, approximately 3 to 4 minutes. Flip the slices over and top them with cheese. Heat until the cheese is melted and gooey. Serve immediately. 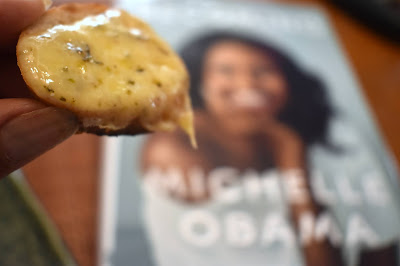 It was a toss-up as to which gouda toast was our favorite. But I think it was the truffle cheese toast!
*This blog currently has a partnership with Amazon.com in their affiliate program, which gives me a small percentage of sales if you buy a product through a link on my blog. It doesn't cost you anything more. If you are uncomfortable with this, feel free to go directly to Amazon.com and search for the item of your choice.

Click to see what everyone else read in September 2020: here.