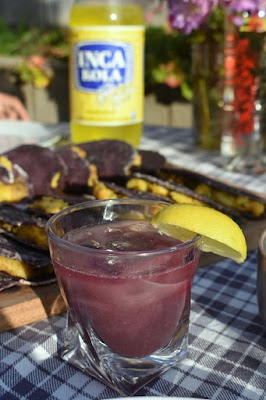 Earlier this year I discovered the writing of George Mahood when I came across Not Tonight, Josephine: A Road Trip Through Small-Town America. You can read my thoughts about that book in my post - Road Trip Food + Jake's Scrambled Eggs. In any case, that cemented my admiration of Mahood's writing.

Then, earlier this month, I read Free Country: A Penniless Adventure the Length of Britain by George Mahood and made a California Chip Butty. So, when Travels with Rachel: In Search of South America by George Mahood* popped up in my Kindle suggestions, I ordered it immediately. 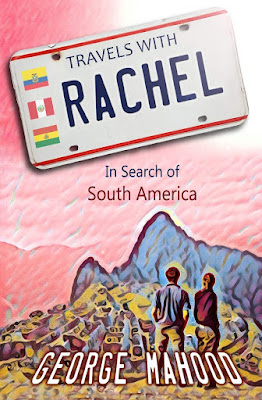 As usual Mahood seamlessly fuses the informative and the hilarious when he recounts his and Rachel's belated honeymoon through South America. In typical Mahood-fashion, much of the hilarity ensues through the couple being frugal in their spending. One example was then they wanted to save three dollars on a tour which had them hunting for anacondas wearing flip flops and shoddy sneakers instead of waterproof boots. And, on their anniversary, they decided to splurge from their usual hostel accommodations and discovered that their two single beds were located in a room with a flimsy curtain that looked directly into the dining room of the hotel.

Through their adventures and misadventures, Mahood describes their time in Bolivia, Peru, Chile, and more. In his usual self-deprecating manner he both acknowledges and respects the cultural differences between the South Americans and the tourists. If you like travelogues and love a good laugh, any of Mahood's books will do the trick. This one had the added humor of including miscommunications and clashes that can only occur between spouses! Though I will say Rachel seems remarkably chill through everything.

"As we sat chatting with full stomachs, we felt acutely aware of the strange and slightly uncomfortable dichotomy of being first world travellers in a less developed country. In the morning, we had been helping locals swap chickens for milk from the back of a rusty pickup truck, in the evening we were sipping mojitos on a roof terrace" (pg. 41)

"Before coming to South America, many people had suggested that we shouldn’t eat street food because of the risk to our delicate Western stomachs. Rachel had been more cautious than me. I had ignored this advice and only showed restraint when offered hallucinogenic cactus juice with life–altering side–effects. I don’t think you can fully embrace a country unless you eat its street food" (pg. 66).

"I stumbled upon the notorious Mercado de las Brujas – Witches’ Market – where the definition of weird purchases is rewritten. Here you can buy an array of bizarre things, such as potions, voodoo dolls, statues, dried frogs, herbal ‘stimulants’ and dried llama foetuses. The llama foetuses are said to ward off evil spirits, and are often built into the foundations of new houses in Bolivia to ensure a happy household" (pg. 113). 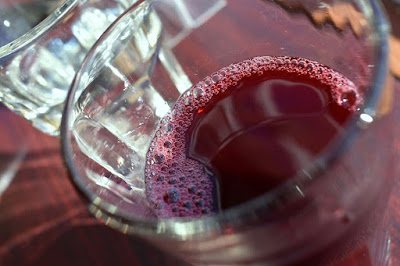 As with his other books, he describes a lot of food on the pages, included boiled sweets that I just can't picture. "A woman resplendent in a series of brightly coloured shawls and a black panama hat popular in the area, boarded the bus in one of the many villages we stopped in. She walked down the aisle selling small plastic bags of boiled sweets. We bought a bag and she continued down the bus. Ten minutes later, another similarly–dressed woman boarded at a different stop and offered identical bags of sweets" (pg. 26).

More food from vendors..."We had a three hour wait in Sigchos for our connecting bus, so we had a look around the town – it didn’t take very long – and then sat in the main square and ate a bowl of fried potatoes and onions bought from a street vendor" (pg. 39).

Then, more about the local fare..."Huanchaco is credited as being where the Peruvian dish ceviche originated. Ceviche is a dish consisting of raw fish with lemon juice and often chili" (pg. 71).

And something slightly illicit..."Juan Pablo made us all a cup of mate de coca – a tea made from coca leaves and sweetened with shit-loads of sugar. Locals use coca tea to help cope with altitude sickness, although no scientific studies have ever proved its effectiveness. It is more likely that it acts as a stimulant because of its mind–altering qualities. The leaves of the coca plant are the base ingredient for cocaine, and although considered mild in its dosage, one cup of mate de coca is enough to test positive for a cocaine drug test" (pg. 87) 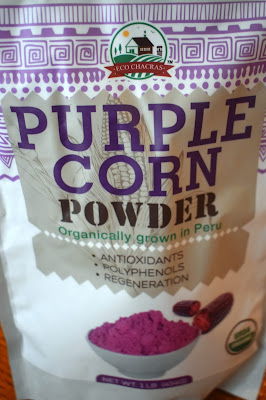 I made these for Peruvian Independence Day and neglected to share it then. This was the perfect opportunity. While not specifically mentioned, I could imagine George and Rachel drinking refreshing glasses of Chicha Morada, a Peruvian purple corn drink.
Ingredients
Procedure
Gently scrub your pineapple and slice off the skin in thick strips. Cut the pineapple meat into cubes and set aside.
Add the water and purple corn powder to a pot and bring to a simmer. Whisk until the purple corn powder is completely combined. Stir in the pineapple skins, pineapple cubes, cinnamon sticks, cloves, and star anise. Bring to boil then reduce heat to a simmer. Let cook for 35 to 40 minutes.
Let cool for 10 minutes. Strain out the fruit and spices. Stir in the maple syrup and juice from the lime. 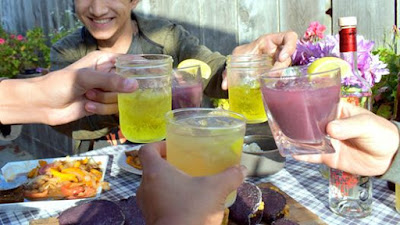 '
Let the drink cool to room temperature, then store in the fridge to cool completely. Give it a stir before pouring. Serve over ice and enjoy. In the photo above, there are two glasses of Chica Morada, two glasses of Inca Kola, and one Chilcano de Pisco. Salud!
*This blog currently has a partnership with Amazon.com in their affiliate program, which gives me a small percentage of sales if you buy a product through a link on my blog. It doesn't cost you anything more. If you are uncomfortable with this, feel free to go directly to Amazon.com and search for the item of your choice.

Click to see what everyone else read in September 2020: here.