Licorice Laces, Orange Soda, and the curious incident of the dog in the night-time #FoodieReads 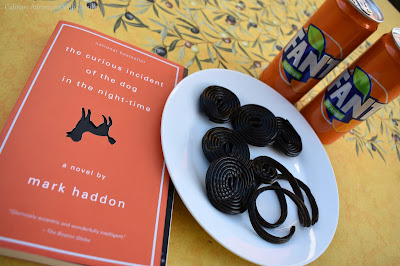 This book - the curious incident of the dog in the night-time by Mark Haddon* - has been on my radar for years. A friend recently placed it in his top seven most influential reads of his life. But I never found the occasion to read it till it appeared as an option on D's summer reading list. In fact, there were multiple books on his list that I had never picked up. So, we bought them, and I breezed through three of them this week.

Christopher John Francis Boone knows every prime number up to 7,057. He loves animals, especially his pet rat Toby. Being on the autistic spectrum, he lacks understanding of human emotions. He cannot stand being touched. And he despises the colors yellow and brown.

This book has at its core Christopher's quest to investigate the suspicious death of a neighborhood dog named Wellington. But it's really a jaunt through the mind of an autistic boy just navigating his life.

He narrates: "This will not be a funny book. I cannot tell jokes because I do not understand them. Here's a joke, as an example. It is one of Father's, His face was drawn but the curtains were real" (pg. 8).

Haddon gives an eloquent peek into how Christopher's brain works. "My memory is like film. That is why I am really good at remember things, like conversations I have written down in this book, and what people are wearing, and what they smell like, because my memory has a smelltrack which is like a soundtrack. And when people ask me to remember something I can simply press Rewind and Fast Forward and Pause like on a video recorder, but more like a DVD player because I don't have to Rewind through everything in between to get to a memory of something a long time ago. And there are no buttons, either, because it is happening in my head" (pg. 76).

I will be interested to hear the discussion about this and the other books when D goes back to school in August.

On the Plate
While this isn't a foodie book, there is plenty of food mentioned. And food, really preparing meals for Christopher's sustenance, is one of the only ways that Christopher and his father actually seem to interact.

When his mother dies, Mrs. Shears comes over to cook dinner for Christopher and his father. "And then she made us spaghetti and tomato sauce. And after dinner she played Scrabble with me and I beat her 247 points to 134" (pg. 28).

His foods can't be certain colors and the foods certainly can't touch. One evening, his father suggests, "'I'll stick one of those Gobi Aloo Sag things in the oven for you, OK?' This is because I like Indian food because it has a strong taste. But Gobi Aloo Sag is yellow, so I put red food coloring into it before I eat it. And I keep a little plastic bottle of this in my special food box" (pg. 67).

I will be trying to make a Battenburg cake. But that will be for another post. This time, I just decided to pick up some licorice and orange soda. The boys were thrilled to have what they called a 'junk food' adventure. All things in moderation, boys! Here was my inspiration...

When he visits Mrs. Alexander to question if she saw anything related to Wellington's murder. She invites him in for tea, but he declines because he doesn't go into other people's houses. "'Well, maybe I could bring some out here. Do you like lemon squash?' I replied, 'I only like orange squash'" (pg. 41). I actually have no idea what orange squash is, but the picture that popped into my head was Fanta!

When Christopher runs away from home, he writes, "I opened up my special food box. Inside was the Milkybar and two licorice laces and three clementines and a pink wafer biscuit and my red food coloring. I didn't feel hungry but I knew that I should eat something because if you don't eat something you can get cold,so I ate two clementines and the Milkybar. Then I wondered what I would do next" (pg. 124).

Now I wonder what I'll read next.... Suggestions?