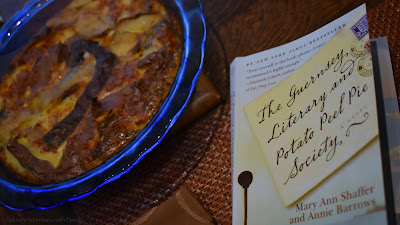 I will be hosting this book - The Guernsey Literary and Potato Peel Pie Society by Mary Ann Shaffer and Annie Barrows* - for my #LitHappensBookClub in July as well as the movie for July's Food'N'Flix. However, I thought I'd share the recipe that the book inspired me to make: the eponymous Potato Peel Pie. 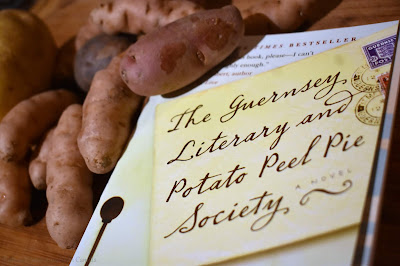 Typically I read the book before I watch the movie, but I did the reverse in this case. In fact, I think I watched the movie two or, even, three times before I picked up the novel.

Synopsis: Juliet Ashton receives a letter from a complete stranger Dawsey Adams, a founding member of the Guernsey Literary and Potato Peel Pie Society. And so begins a compelling correspondence with the society's members, learning about their island, discovering their tastes in books, and seeing the impact the recent German occupation has had on their lives. Captivated by their stories, Ashton sets sail for Guernsey and her life is forever altered...in a lovely way.

I have always loved epistolary novels. There is something inherently voyeuristic about reading a story comprised solely of letters and telegrams. You get the sense that you've uncovered a box of old correspondence in an attic, but there's no harm in reading them. And what's a little bit more intriguing, at least to me, is that you aren't inhabiting the narrator's mind; you are reading what the narrator wishes another character to read. There's always some subjectivity and, perhaps, unintentional posturing involved. It's fascinating.

Some of my favorite passages...

Juliet to Sophie. "Mark is here. Mark, who is rich and debonair and wants to marry me. Mark, whom I was doing very well without. Why can't I stop thinking about Dawsey, who probably doesn't give a hoot about me. But maybe he does. Maybe I was about to find out what's on the other side of that silence. Damn, damn, and damn. It's two in the morning, I have not a fingernail to my name, and I look at least a hundred years old. Maybe Mark will be repulsed by my haggard mein when he sees me. Maybe he will spurn me. I don't know that I will be disappointed if he does" (pg. 211).

Dawsey to Juliet. "I am happy you liked the white lilacs. I will tel you about Mrs. Dilwyn's soap. Around the middle of the Occupation, soap became scarce; families were only allowed one tablet per person a month. It was made of some kind of French clay and lay like a dead thing in the washtub. It made no lather - you just had to scrub and hope it worked. Being clean was hard work, and we had all got used to being more or less dirty, along with our clothes. ...One day Mr. Scope's pig died of milk fever. Since no one dared eat it, Mr. Scope offered me the carcass. I remembered my mother making soat from fat, so I thought I could try it. ...When the soap had hardened enough, we cut it into circles with Amelia's biscuit cutter. I wrapped the soap in cheese cloth, Elizabeth tied bows of red yarn, and we gave them as presents to all the ladies at the Society's next meeting. For a week or two, anyway, we looked like respectable folks" (pp. 79-80).

While I wouldn't call this book a riveting historical fiction, as far as World War II happenings go, I found myself growing more and more enamored with the people of Guernsey. And it has inspired me to look more deeply into the English Channel islands and their geographical role in the war.

Also, I always adore a book that is so clearly a love letter to letters and words. Quite literally the characters in the book are brought together by words and books. It's a fantastic homage to the written word. 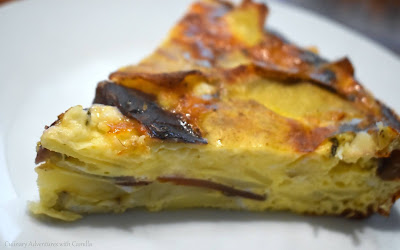 There was no question in my mind that I had to attempt a potato peel pie. In a letter from Amelia Maugery to Juliet, she writes, "Will Thisbee was responsible for the inclusion of Potato Peel Pie in our society's name. Germans or no, he wasn't going to go to any meetings unless there were eats! So refreshments became part of our program. Since there was scant butter, less flour, and no sugar to spare on Guernsey then, Will concocted a potato peel pie: mashed potatoes for filling, strained beets for sweetness, and potato peelings for crust. Will's recipes are usually dubious but this one became a favorite" (pg. 51).

Okay, I couldn't quite manage a dessert potato pie; but I did create potato peel ribbons and whipped up a savory potato pie. The boys sat down to breakfast and objected, "This isn't the way it was described, Mom." Well, I took some liberties. "And it's not new. This is just your regular potato frittata. True enough.

But, for this version, I made sure to make the potato peels very apparent! 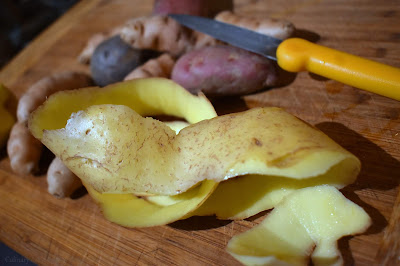 Procedure
Preheat oven to 350 degrees F. Place your potato peels and slices in a pan and cover them with water. Bring the water to a boil and cook until the potatoes are firm but piercable with a fork. Drain and set aside. 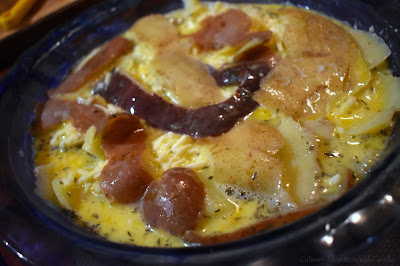 Butter your baking dish and layer in your potatoes. I reserved the peels for the top. Beat the herbs and ground pepper into the eggs. And pour the eggs over the potatoes. Move the potatoes around to make sure that the egg mixture penetrates to the bottom of the pan.

Cover with foil and bake in a 350 degree oven for 50 minutes. Uncover and return to the oven for an additional 10 minutes. Let cool slightly. Sprinkle with good quality flake salt and serve. This is just as good cold the next day. 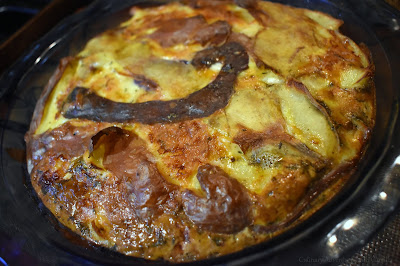 Stay tuned for more recipes inspired by this story come July when I host it for #LitHappensBookClub and #FoodNFlix.