This is a sponsored post written by me in conjunction with the June #WinePW South Africa event.
Wine samples were provided for this post and this page may contain affiliate links. 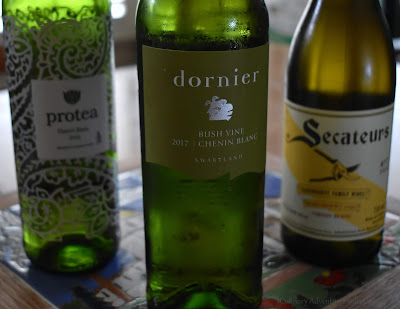 Jennifer of Vino Travels is hosting us as we explore the wines of South Africa. You can read her invitation post here. And several of us received industry samples for the event. Take a look at the South African line-up... 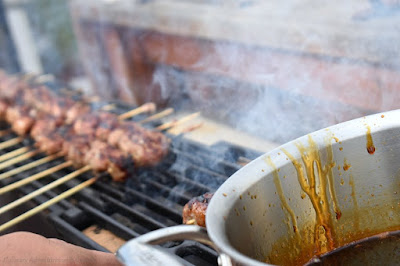 I have cooked South African cuisine before and it's always been a hit. In fact, I did a South African Soirée for one of my best friends' birthdays years ago (I think it was nine years ago now). I made boontjiesop, bobotie, geelrys, three different sambals, melktert and poured cordials of Amarula liqueur for dessert. I have also made a version of bobotie when we made a dinner from Lesotho, a country completely surrounded by South Africa. Then I served Bunny Chow for August 2016's #WinePW event. So, I wanted to try something new.

While I was trying to figure out what South African recipes I wanted to try, I came across the concept of a 'braai.' First, it rhymes with 'fry'. Secondly, it's much like barbeque here in the States. And, like an American barbeque, a braai is a social gathering where people crowd around a grill to watch someone cook over coals, smell the aromas, and share a meal. It's a time to eat, drink, and be merry...for hours.

I did what I normally do when I have too much wine to pair for just me and Jake - I invited myself over to my best friend's house and co-opted her husband to grill for me! But I did bring the wine...and all the ingredients! Thanks, Mike! 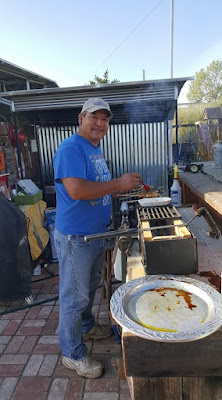 A traditional braai often includes many different types of meat prepared over an open wood fire. Chops, steaks, loins, poultry, boerewors (sausages) and sosaties (skewers) are staples. And along the coast seafood plays a prominent role,. They might serve crayfish, spiny lobsters, whole grilled fish, particularly snoek, which is an oily, cold-water fish found around the Cape of Good Hope. I skipped the fish. Here's what we served... 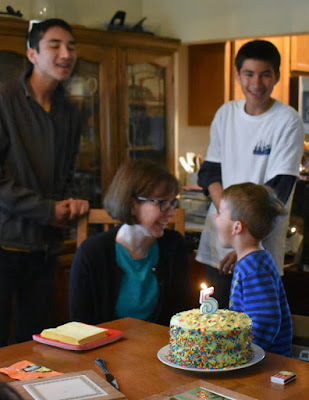 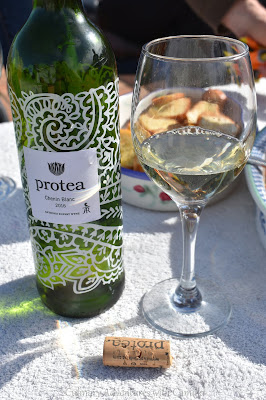 To go along with our South African Braai, I opened up three bottles of Chenin Blanc from South Africa: Protea Chenin Blanc 2016, 2017 Dornier Bush Vine Chenin Blanc, and Badenhorst Secateurs Chenin Blanc 2018. The second in that list was sent to me as an industry sample from Dornier Wines, imported by Canopy Wines*; the others I found on my own.

Chenin Blanc isn't a varietal that I normally pick up. In fact, a quick search showed me that I've only written about it twice before: Cod in a Mushroom-Cream Sauce with Dom Pichot Vouvray (for May 2016's #Winophiles) and as part of a wine pairing dinner at Bernardus Lodge with Chef Cal Stamenov - Food as Art + My Foodie Crush on Chef Cal. So, I was excited to learn more and really dig in to tasting and pairing the wines.


South Africa’s wine styles are differentiated more by varietal than by region. Pinotage, the country's signature grape, is a cross between Pinot Noir and Cinsault. When Pinotage is blended with other red varieties, such as Cabernet Sauvignon, Merlot, Syrah, or Pinot Noir, it is often labeled as a 'Cape Blend.' Chenin Blanc, locally known as 'Steen', dominates white wine production, with Chardonnay and Sauvignon Blanc following close behind. Given the sponsored Chenin Blanc, I decided to go completely white for this braai. 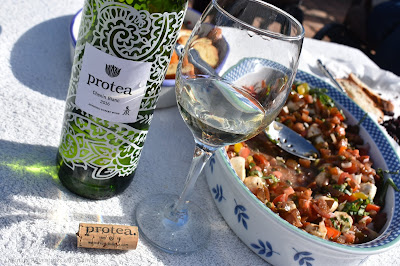 I poured the Protea Chenin Blanc 2016 with the Heirloom Tomato & Fresh Mozzarella Salad
[recipe below]. The Protea was pale straw in color with aromas of citrus and honeysuckle. On the palate, the citrus was predominant with a lemony tang that was mellowed with more summer stone fruit on the finish. This was a lively, light wine. 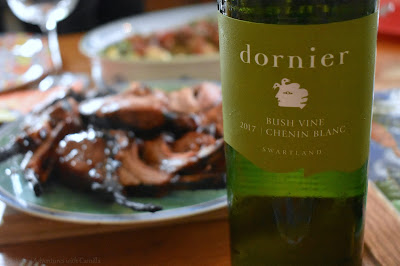 The 2017 Dornier Bush Vine Chenin Blanc, the sponsored wine for this event, I served with Sosaties [recipe below] and Lamb Lollies. A single varietal - 100% Chenin Blanc - this wine was more full-bodied than I expected for a white wine. I also did some reading on what 'Bush Vine' means; that refers to the vines being un-trellised.


This wine was very interesting. At the beginning I got hints of herbs and grass mixed with tart apple and citrus. But the finish was decidedly tannic and reminded me of walnuts or lime rind.

I think it countered the smoky barbeque sauce [recipe below] that I slathered on the skewers and lamb lollipops really well. 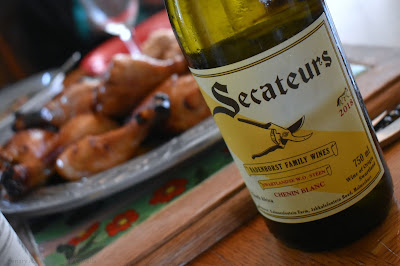 I poured the Badenhorst Secateurs Chenin Blanc 2018 with a dish called The Hot Bird, grilled chicken with piri-piri sauce [recipe below]. And, I think, this was my favorite of the three. While not a single varietal, the winemaker holds the blend a secret. I read, "[It's] Chenin Blanc with a sprinkling of Palomino and another secret grape." Fine. Be mysterious. Whatever...it's delicious.

Bright and flinty with some alluring notes of ripe persimmon and poached quince. I love anything with that fruity, floral aroma. But on the tongue it's more defined with some yeast and mineral notes. 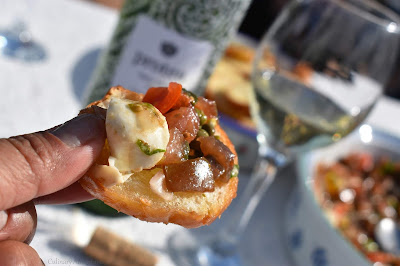 Heirloom Tomato & Mozzarella Salad
Brush baguette slices with olive oil and grill until golden and crisp, approximately 2 to 4 minutes. Rub each piece with cut side of garlic and set aside.

Combine mozzarella, tomatoes, shallots, and capers in a bowl. Whisk the remaining ½ C olive oil and balsamic vinegar in a bowl to combine, season to taste with salt and pepper. Drizzle over tomato salad and toss to coat. Scatter with basil and serve with the grilled bread. 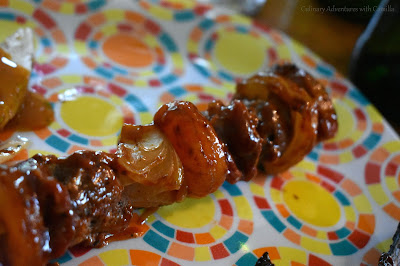 Sosaties are a Cape Malay dish and the name derives from the words 'sate”' meaning skewered meat and 'saus', a spicy sauce in Afrikaans. There are more than a few variations to the sosaties marinade, but most, at minimum, include apricot jam, curry powder and garlic. I found one recipe with tamarind which sounds like a delicious, tangy addition. The combination of fruit and curry is something you’ll see in a few Cape Malay recipes, such as bobotie. And while lamb is the most popular meat for these  skewers, since I was doing lamb lollies also, I decided to use some wild boar that I had. 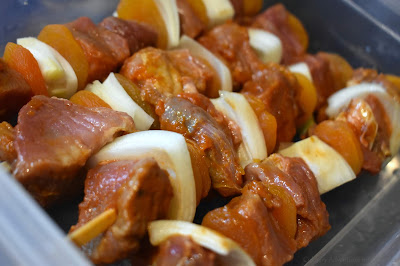 For the marinade...soften onions in a splash of olive oil at low heat. You want it to become silky and translucent without browning. Mine took approximately 15 to 20 minutes. Add in the garlic and ginger. Stir to combine. Then whisk in the jam, vinegar, and spices. Mix well. Remove from heat and let cool.

Place the boar in a medium mixing bowl and pour the cooled marinade over the top. Massage it in so that the pieces are evenly coated. Refrigerate overnight, if possible, but at least for a few hours.

For the skewers...soak the apricots in hot water to soften, approximately 10 to 15 minutes. Also soak your skewers, if using wooden ones. Thread the meat onto skewers, alternating with the soaked dried apricots and chunks of onion. Cook on a grill/bbq until the meat is cooked through then serve. Let diners brush their skewers with the spicy, smoked barbeque sauce. 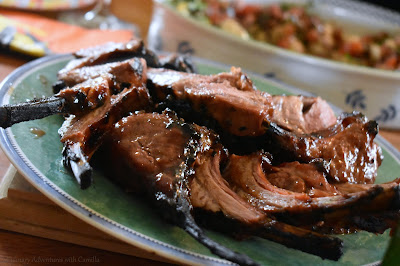 Preheat the oven to 350 degrees F. Cut tomatoes in half lengthwise. Lay the tomatoes, jalapeno, and onions on a parchment or silicone-lined baking sheet. Roast until the tomatoes are soft, the onions beginning to caramelize, and the pepper is wilted, approximately 55 to 60 minutes. Let cool slightly. Once they are cool enough to handle, rough chop the mixture. Set aside.

Heat olive oil in large pot. Add tomatoes mixture and stir in remaining ingredients. Bring to a boil, then reduce heat to a simmer. Cook uncovered until the sauce darkens and thickens considerably. Let cool. Then purée in a blender or food processor until smooth. It may take two batches. Season to taste with salt and pepper, as needed. 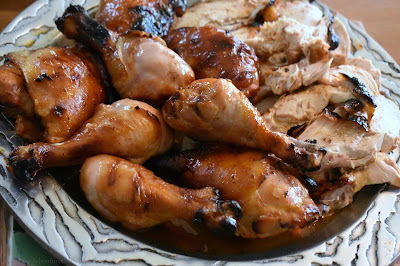 The Hot Bird (Chicken with Piri-Piri Sauce)
Peri peri is Swahili for 'pepper pepper', or 'strong pepper' as the repetition of the word intensifies it. It was adopted by the Portuguese community in Africa and spelled piri piri. The sauce I had was imported from Portugal. It's also called the bird's eye chile. 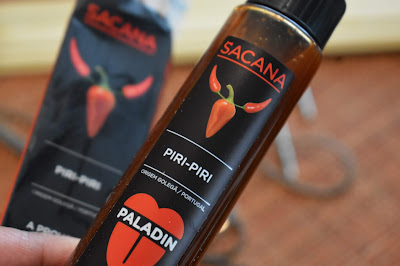 Combine all ingredients in a sauce pan. Whisk to combine. Cook on low heat, stirring continuously, for 5 to 7 minutes. Set aside. Place chicken in a medium mixing bowl and pour half of the marinade over the top. Massage it in so that the pieces are evenly coated. Refrigerate overnight, if possible, but at least for a few hours. Reserve the other half for brushing on while cooking and for serving.

Grill or braai chicken over medium heat until cooked through. Serve with sauce on the side. Because we had several kids who might not have liked the heat, I let everyone add the piri piri to their own servings. 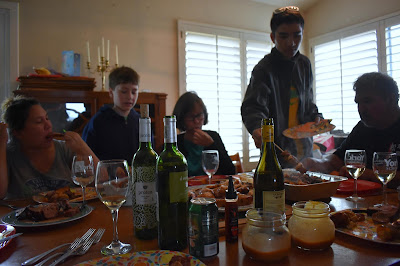 And that's a wrap on South Africa for now. Thanks to our sponsors for sending the samples. I had fun exploring the wines, learning more, and pairing them with foods. Next month we'll be turning our eyes on BBQ and Rioja with Jeff from FoodWineClick! at the helm. Stay tuned for more information from him on that. 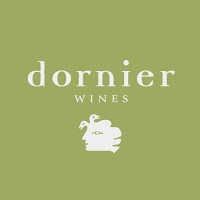 
*Disclosure: I received sample wines for recipe development, pairing, and generating social media traction. My opinions do not necessarily reflect the opinions of the organizer and sponsors of this event.
Posted by Camilla M. Mann at 8:15 AM