By Camilla M. Mann September 21, 2017
Gimjang is the traditional process of preparing kimchi. This is not that. I'm pretty sure actual Koreans wouldn't consider this kimchi either. But, it's similar to what I buy in the refrigerated section at Whole Foods...and they call that kimchi. So, I'll do the same! 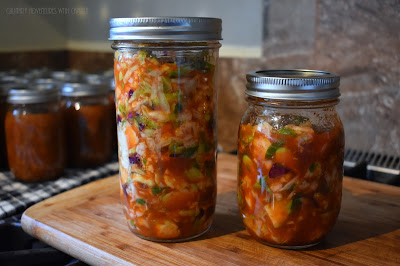 There's a Korean saying: "There are as many types of gimchi as there are holes in the ground." Reason being that that's how gimchi/kimchi is traditionally made.

A friend who lived in Korea for many years informed me that traditional kimchi is made in fall, left in kimchi pots in the ground for several months during winter, to ferment naturally. Although most Koreans now, she wrote, have special "kimchi refrigerators" - sort of like wine fridges - that keep the kimchi at the right temperature until it's ready in spring. Wow. I want one of those!

So, my version of fermented cabbage may be the furthest possible process from authentic gimjang, but it tastes great and I love having fermented veggies in my fridge at all times. And, it's so easy to make. For this version, I didn't just use cabbage. I thinly sliced Brussels sprouts, used both green and purple cabbage, and added in small pieces of golden cauliflower. It was definitely a clean-out-the-veggie-bin version. 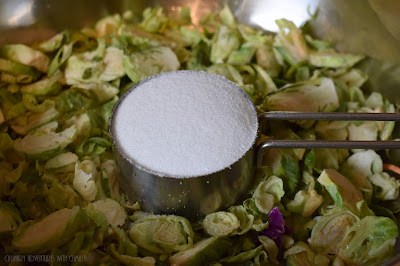 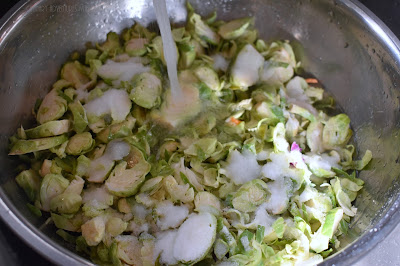 Procedure
In a large mixing bowl place salt and veggie pieces. Add in enough warm water to dissolve the salt. Submerge the veggies in the salt water and weigh it down with a plate, so it stays submerged. Let veggies soak and soften in the brine for 2 hours. 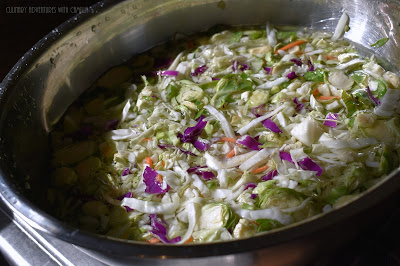 Once the veggies have finished soaking, drain, rinse it and squeeze it gently to remove excess liquid. Place everything in a large mixing bowl. 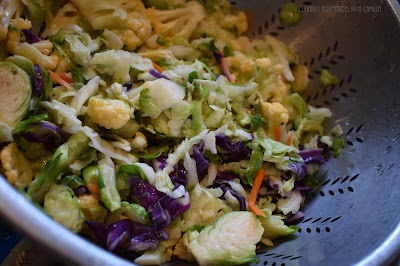 Use your hands (or tongs instead if you have any open cuts as the vinegar can sting) to thoroughly incorporate the hot sauce mixture with the veggies.

Pack the kimchi into a clean jar - or a few jars. Screw the lid on tightly and keep in a cool, dry place, out of direct sunlight (my pantry worked well for this) for 3-4 days. After 3 days, open the jar and look for tiny bubbles. If it’s begun to bubble, it’s ready to serve or to be refrigerated. If it hasn’t yet begun to bubble, leave it for another day. The kimchi will continue to ferment in your refrigerator and should be consumed within a month.