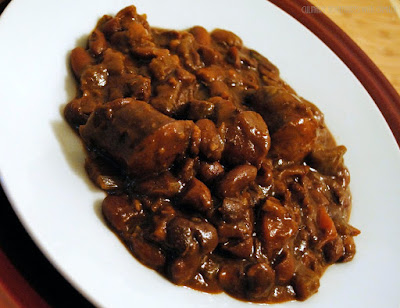 For this round - our August-September selection - of Cook the Books, the book selection was chosen by Deb from Kahakai Kitchen. She chose Farmer Boy by Laura Ingalls Wilder.* You can read Deb's invitation in the book announcements: here.

Deb wrote: "Farmer Boy is the second book of the Little House series and was first published in 1933. It is the only book that does not focus on the childhood and life of Laura Ingalls and instead focuses on the childhood of her future husband, Almanzo Wilder. Set in the 1860s in upstate New York, before Laura Ingalls was even born, it begins just before Almanzo's ninth birthday and details life on the Wilder family's farm. Almanzo is pretty much constantly hungry and apparently quite the foodie, so I think we'll have a lot of fun exploring the food and recipes of America in the 1860s as we step back into childhood with this selection." 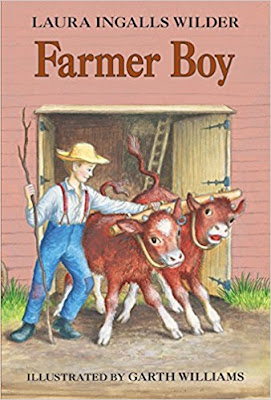 I loved the book series when I was a kid; I remember reading it until the pages fell out of the binding! Still I haven't read any of them since childhood and Farmer Boy doesn't stick out in my mind in particular.

I bought the entire set when my boys were younger, but they never really cared for them. Nor did they like the Hardy boys adventures which were another of my favorites. Go figure! But they read incessantly, so I am not going to complain too much that our genres don't align.

In this book Laura Ingalls Wilder recounts the adventures of Almanzo Wilder, whom she later marries. It's the 1800s and Almanzo is nine years old. On the surface this is a charming tale of a rural childhood on a farm. But, a deeper look reveals conflicts between the farm-raised Wilders and their urban cousins. And, more interesting to me, was the relationship between Almanzo's parents. In a pre-feminist era, their marriage was affectionate and respectful and she played an equal role in providing financial support for the family. Her culinary acumen was vital to their survival.

On the Plate
I certainly don't remember there being so much food in these books. But Almanzo was constantly hungry. And his mother was constantly feeding him! "It takes a great deal to feed a growing boy," Mother said.

But the dish that inspire me was baked beans. Almanzo ate the sweet, mellow baked beans. He ate the bit of salt pork that melted like cream in his mouth. He ate mealy boiled potatoes, with brown ham-gravy. He ate the ham. He bit deep into velvety bread spread with sleek butter, and he ate the crisp golden crust. He demolished a tall heap of pale mashed turnips, and a hill of stewed yellow pumpkin. Then he sighed, and tucked his napkin deeper into the neckband of his red waist. And he ate plum preserves and strawberry jam, and grape jelly, and spiced watermelon-rind pickles. He felt very comfortable inside. Slowly he ate a large piece of pumpkin pie.

I started with dry beans. Click for a how-to: here. You can do this the night before and keep in the fridge till you're ready to use them. If you are using pre-cooked beans, I think I had about 4-5 cups. Also, I like adding espresso or coffee to my baked beans for added flavor. If you don't drink coffee, skip it and substitute apple juice or stock. 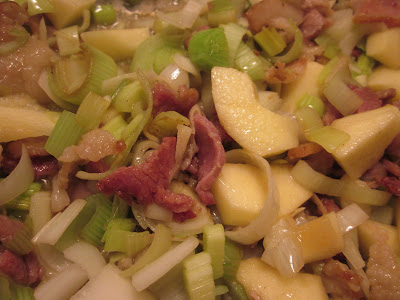 Preheat the oven to 325 degrees F. In a large, thick-bottomed pan, cook the bacon and sliced leeks until the fat has been rendered but the bacon is not crispy. Add the apples and beans. 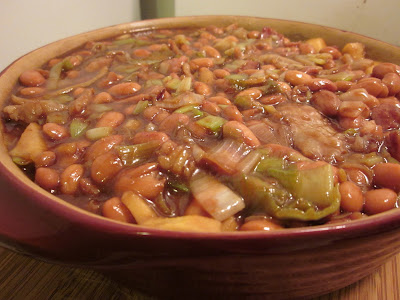 Stir in everything else until well-combined. Place in a baking dish. Bake, covered with foil, for 90 minutes. Uncover and stir in the cooked sausages. Cover again and return to the oven for an additional 30 to 45 minutes. 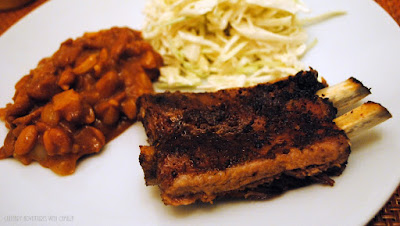 I served this batch with spareribs, inspired by the Wilders. Every year Father killed a beef and saved the hide to make shoes. All that afternoon the men were cutting up the meat, and Almanzo and Royal were hurrying to put it all away. All the pieces of fat pork they packed in salt, in barrels down cellar. The hams and shoulders they slid carefully into barrels of brown pork-pickle, which Mother had made of salt, maple sugar, saltpeter, and water, boiled together. Pork-pickle had a stinging smell that felt like a sneeze. Spareribs, backbones, hearts, livers, tongues, and all the sausagemeat had to go into the woodshed attic. Father and Joe hung the quarters of beef there, too. The meat would freeze in the attic, and stay frozen all winter.

I am also linking this post to the Foodie Reads Challenge.
Here's what everyone else read in September 2017: here.